Vivacious and Unapologetic, “The Rover’s” 17th-century Feminism is Painfully Pertinent 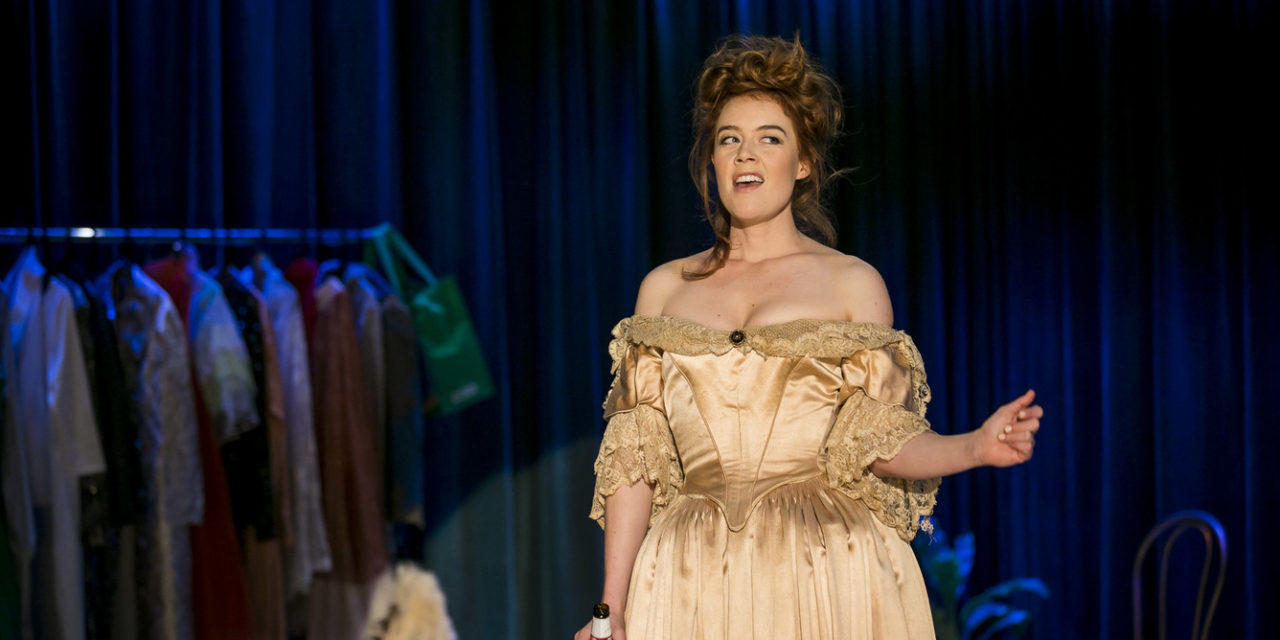 The Rover, now on at Belvoir Theatre in Sydney, starts unexpectedly, with long-dead 17th-century playwright Aphra Behn walking onstage – staring down the audience in a gaudy gold gown, beverage in hand, vivacious and unapologetic. She challenges us to accept a play by a female playwright:

Men are but Bunglers, when they wou’d express

The sweets of Love, the dying tenderness;

But Women, by their own abundance, measure,

And when they write, have deeper sense of Pleasure.

She then exhorts those in the audience who do not like the prospect of a female playwright to, in her words, “fuck off.” When nobody chooses to do so, Behn allows the play to start. Under the direction of Eamon Flack, this irreverent, hilarious production deftly offers Behn’s work in a way that is accessible, clever and utterly relevant.

It is a rare case where the drama of a playwright’s biography competes with the drama of the play. Often identified as England’s first professional female playwright, Behn operated as a spy for King Charles II, spent time in debtors’ prison, wrote poetry (like The Disappointment) in a literary circle that included the infamous Earl of Rochester, confronted slavery in her novel Oroonoko (based on her experience in Surinam) and wrote almost 20 plays, among them The Rover.

With its cross-dressing, homo-eroticism and mistaken identities, The Rover has faint echoes of Shakespearean comedies (like Twelfth Night and Measure for Measure), which audiences may be more familiar with. But, that aside, Shakespeare and Behn are miles apart. Between Shakespeare’s death in 1616 and the first performance of The Rover in 1677, England had witnessed a civil war (including the closing of its theatres), the execution of its monarch Charles I, the period following his death known as the Interregnum, and the restoration of the monarchy under Charles II. When the theatres reopened, there were major changes onstage too – for one, women could now tread the boards. 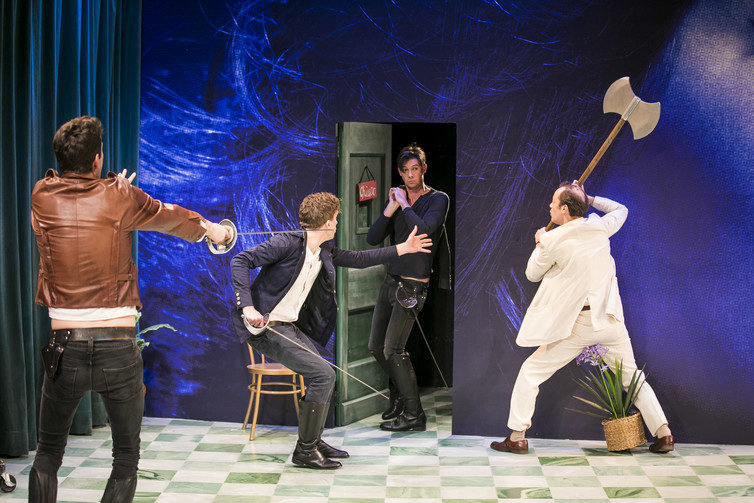 The rover and his posse come to Naples to enjoy the lascivious chaos of Carnival. Photo by Anna Kucera

The Rover, which is based on a 1654 play by Sir Thomas Killigrew, Thomaso, explores how Carnival in Naples offers a chance for the pursuit and achievement of sexual desire. The carnivalesque setting is excessive and ludic: nipple tassels, gladiator costumes, penguin suits and copious amounts of alcohol characterize the play’s ambiance. Coupled with a playful disregard for any strict lines between stage and spectator, onstage and offstage, the result is a warm informality that helps the play feel contemporary, inviting and engaging.

The rover himself, Willmore (played by the charismatic and comically gifted Toby Schmitz), and his posse – including the stiff-upper-lipped Belvile (Leon Ford) and Frederick (Nathan Lovejoy) – have come to enjoy this lascivious chaos. They are as keen to take advantage of the sexual opportunities in Naples as the women are keen to revel in fleeting freedom and make their own romantic choices.

Willmore is pursued by the reluctant nun-to-be Hellena, played with vigour and a refreshing lack of demureness by Taylor Ferguson. Hellena immediately contradicts the nun’s habit she wears when she expresses her desire to find “some mad companion or other that will spoil my devotion”. Meanwhile, her sister Florinda (Elizabeth Nabben) has no intention of following her father and brother’s “unjust commands” to marry against her will.

The Rover uses the Restoration theatre archetype of the witty, womanizing rake. But it also offers rich, driven and fierce female characters. In adapting Killigrew’s Thomaso, Behn created a more vibrant Hellena, to whom she gave some of the dirty lines originally ascribed to male characters. In Flack’s production, the play’s closing line is also given to Hellena instead of Willmore.

Among an excellent cast, Nikki Shiels is spectacular as the courtesan Angellica Bianca. In a thick Italian accent, she is not shy about taking up as much space as she can. Her photograph dominates the set design: a curtain pulled back early in the play reveals an overwhelming black-and-white glamour shot of Angellica taking up the entirety of the back wall; lips parted, gazing with an expression of both invitation and challenge. Her eyes are also hidden doors, which open up to create Angellica’s balcony and an elevated position from which she can look out. As Jane Spencer has argued, The Rover thus “manages to subject masculine figures to a female gaze.” 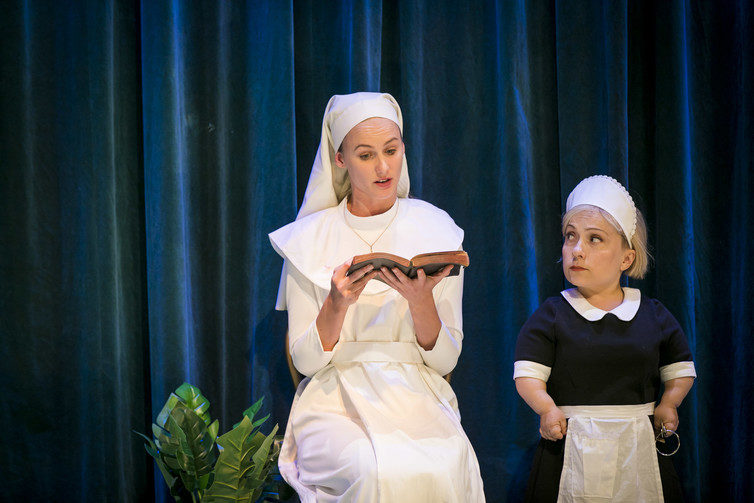 The theatregoers’ response during this preview performance was most interesting. When the prostitute Lucetta dupes the hapless English gentleman Blunt (an on-point performance from Gareth Davies), the audience gave audible “aws” of sympathy.

But later, when Blunt decides to punish the unwitting Florinda for what he views as her sex’s flaws, there is no such audible response. Blunt says:

Cruel, yes: I will kiss and beat thee all over; kiss, and see thee all over; thou shalt lie with me too, not that I care for the enjoyment, but to let thee see I have ta’en deliberated malice to thee, and will be revenged on one whore for the sins of another.

Here the theatre was filled with awkward silence, as spectators struggled to reconcile a lovable victim turned victimising abuser. This reaction is more revealing of us than of Behn’s context. In speaking of women, the 17th-century language of Behn’s male characters hardly needs modernisation. One need only look at contemporary examples – whether global (like Trump) or local (the scandal around St Paul’s College at the University of Sydney) – for evidence that Behn’s critique of social attitudes towards women remains painfully pertinent.

As a woman writing in a man’s world, Behn’s pre-empting of censure and critique is an integral part of her – and the play’s – wit. Flack has adeptly modernised this, offering a production that is unapologetically self-aware and irreverent, and which delights in its own fictions and in its self-conscious performativity. In doing so, it draws in the spectators to share a raucous, unpretentious experience that, while often dropping out of 17th-century discourse, I think would have met with Behn’s approval, for it pleases on its own terms.

The author viewed a preview performance. The Rover is playing until August 6 2017 at Belvoir’s Upstairs Theatre in Sydney.

This article originally appeared in The Conversation on July 5th 2017 and has been reposted with permission.