Upstream Downtown, Animacy Theatre Collective’s submission to The Toronto Fringe Festival in co-production with Common Boots Theatre, is an enjoyable theatrical romp as tightly packed with relevant social and political import as a can of discount-aisle salmon is packed with dubiously-attained, gruesomely murdered fish-bodies.

The stage of St. Vladimir Institute is set with discarded artifacts of human construction: cardboard boxes darkened with grime; a singular empty Starbucks cup; a Styrofoam mannequin head devoid of a body. Out of this wreckage emerge Sojo (Morgan Johnson) and Beagle (Alexandra Simpson), two Chinook salmons who have been displaced by humanity and now find themselves in human bodies, forced into a world that is at once alien, alluring, and dangerous. For just under an hour, we join the fish friends as they navigate themselves towards “home,” whatever that may now mean, even as the threat of their salmon-mortality hangs in the air. 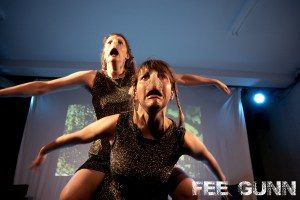 It’s a heavy premise, but Johnson and Simpson, donning fish half-masks, generally keep things light. Under Martha Ross’s playful direction, the friendship between these two fish-women is the beating heart of the piece. Alyssa Martin’s clownish choreography is physically rigorous, and both performers display fantastic athleticism. Video images of salmon schools and roe flash onto a projector, and a live band comprised of Anders Azzopardi and Stefan Hegerat provide groovy original compositions to underscore the adventure. Aesthetically, Upstream Downtown is inventive and easily digestible.

More impressive than mere aesthetics, however, is the level of research put into this piece of work. Animacy Theater Collective, co-founded by Johnson and Simpson, exists on the mandate that entertaining, imaginative, research-based performance work is a vital resource in educating and informing communities. This research is tangible, right down to the show’s program which unfolds into a full page zine “by Sojo and Beagle” detailing the Atlantic Salmon’s former residency in the waters of the Don Valley.

Bodies on stage are inherently political statements, and Johnson and Simpson create a compelling comparison by positioning women’s bodies as those of a colonized and harvested species. When Beagle swims out in an attempt to re-connect with their school, she returns a “changed” fish: wild, predatory, and ready to mate. Under Sojo’s direction, Beagle is put under the magnifying glass, body segmented and highlighted for the audience’s visual consumption. While comical, it is an intentionally discomforting segment, one in which the audience is forced to consider the very real (and sadly, relevant) purported ownership claim by male politicians of women’s bodies, particularly those of non-white women, a claim which reduces women to machines of reproduction. 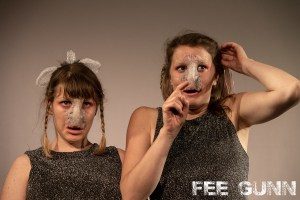 Indeed, ownership is a key theme of the show, specifically that of land. The show begins with a lovely animation (created by Johnson, Kelly King, and Oonagh Butterfield) detailing the Dish-with-One-Spoon Territory upon which Toronto is situated on. Later on, as Sojo and Beagle begin to piece together their garbage surroundings, a letter from a landlord is found detailing a 27% increase on a rental unit. Beagle’s shock and disgust confirms her unfamiliarity to Toronto and the exploit one must abide simply to reside on land that is not really the landlord’s possession in the first place.

It is difficult to approach such a harrowing subject matter in a clown-style of performance. The natural impulse is to embrace a fantastical, heightened world-of-the-play, one that does not have to deal with the ramifications of the problems it presents. Because of this, Upstream Downtown is somewhat lacking in stakes. Horrors such as corporate corruption, pollution, and animal cruelty are addressed, but quickly set aside in favor of the next “bit.” Even when the salmons are faced with certain death, the audience never feels the weight of this mortality. Consequently, the play sometimes falls into a predictable and “safe” rhythm. Should the play continue to develop post-Fringe, I’d be interested in seeing an exploration into less comfortable territory.

Still, Upstream Downtown is an amalgamation of theatrical choices that reflect an impressive body of research and a depth of consideration by all parties involved. It is worth seeing for entertainment value alone, but hopefully, the audience will also emerge with new understanding of, as Sojo and Beagle put it, “the regular ways we murder all the time,” as we inevitably contribute to unyielding capitalism.

This article originally appeared in Alt Theatre on July 9, 2018, and has been reposted with permission. 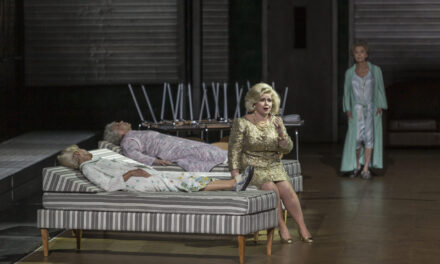