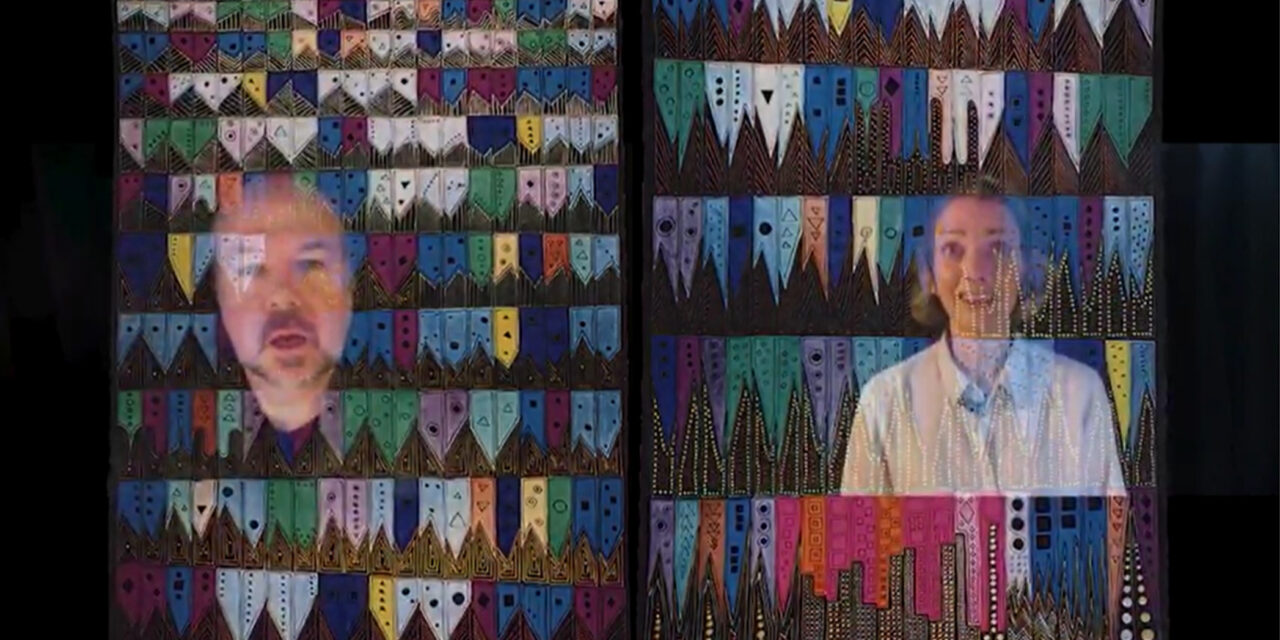 The thing about UnRavelled is that it’s one of those plays that even a week after seeing it random moments from the play continue to knock at the corners of my brain while I’m focused on more mundane topics. It’s the kind of play that I found myself emailing friends to tell them they really need to see it.

UnRavelled is a uniquely woven offering of theatre, medicine, music, art, and even travel through history. The play recounts events based on the real-life story of Canadian-born artist and scientist Anne Adams. After a successful career in science, Adams gradually began painting, finally eschewing science to concentrate on painting. After initially focusing on more quotidian objects to paint, Adams became completely captivated with Boléro by composer Maurice Ravel and began intricate paintings deconstructing the piece phrase by musical phrase. The play’s title is a wordplay on “Ravel” and Anne’s obsession with his works.

The play was recorded as a staged reading over Zoom, as many works are these days, with just three actors and an off-stage narrator reading minimal stage directions. Despite the simple black curtains used as background, the compelling acting and complex script draw the audience deeper and deeper into Anne’s story. The opening scene shows Adams, played by Lucy Davenport, and her husband, Robert, played by Rob Nagle, competing in a game of Scrabble. While it took a few moments to adjust to the Zoom format, the skill of the actors quickly transcended the slight awkwardness of telling the story from separate locations. The actors’ detailed performances easily created the illusion, as good theatre can, of the actors being together in one room: they hand each other glasses of wine; Robert’s eyes follow Anne as she flits about her space.

Anne’s announcement to devote her time to painting immediately introduces a tension between the couple and into the story which neatly shows the struggle to adapt their relationship as one half of the couple changes and shifts to life’s challenges while the other doesn’t or can’t. As the play’s action progresses, Anne’s fixation on Boléro leads to her eventually seeing and discussing with Maurice Ravel himself (though he is long dead – thus the travel through history) how he felt about Boléro and the creative process; it is through these conversations that the connection between the two artists a century apart is revealed. Both artists were diagnosed with the same disease: primary progressive aphasia, a form of frontotemporal dementia.

The play raises questions about love, relationships, the source of art, the foundation of identity, the convergence of science with art, the grief and responsibilities of caregivers. The script quite skillfully weaves together these questions with reams of scientific information that enlighten without preaching or becoming pedagogical. More than anything else, the deeply committed relationship between Anne and Robert is evident and without question, help guide them along the journey of Anne’s illness and brilliance.

Jake Broder wrote the play; Nike Doukas directed. The production is sponsored by the Global Brain Health Institute, established at Trinity College Dublin, the University of Dublin, Ireland, and the University of California, San Francisco.

The play and two recordings of live events discussing the play with members of the creative team and neurologists are streaming until March 31, 2021 can be found at www.UnRavelledPlay.com. You should really see it.