If you don’t know about loss, then you will by the end of this show. Sara (Ilire Vinca) is married to Din (Bujar Ahmeti). They have a daughter, Lola (Kosovare Krasniqi), who looks a similar age to her father. Din can’t get a job. Even when he finds work, he can’t get his identification papers to take the position up – he is given a death certificate instead, which isn’t even his. By degrees, Sara gets madder at Din’s incompetence. Lola, meanwhile, is distant from Din and communicates only with Sara.

If you’ve not already guessed, Din, although he lives and breathes on stage, doesn’t really exist. In fact, he represents one of the 1600 people still missing from the Kosovo War, which ended in 1999. Lola never knew Din. His presence is unreal to everyone except Sara and the audience. Unable to accept that Din is gone, unable to grieve properly for lack of a body, this is how Sara has coped for the last few decades.

Playwright Jeton Neziraj and director Kushtrim Koliqi give a 90-minute study of what this unimaginable grief can do to a family. It explores how Sara’s inability to accept what has happened to her husband has turned her into a kind of tyrant. This is why Koliqi needed a small, prison-like, non-theatrical space to stage the show. Prishtina’s Ethnographic Museum was chosen not only for its link to history but also because it is an 18th Century house filled with memories. And though the play is contemporary, it equally feels like it is set in the 19th Century, the ghosts and traumas that stalk this family are decidedly Ibsen-esque.

The play is aggressively sad. It’s impossible to think of it in any other way. Sara – an impressive and austere Vinca – suffers so much that she oppresses the truth of her daughter’s life by insisting she joins in with the fantasy that Din is still alive. It’s hard not to feel for Lola, who interjects with the occasional “Mum!” in weary exclamation as Sara has another imaginary argument with Din. It’s hard not to want to believe that Din is alive, for Sara’s sake. What’s tragic is the real opportunity for love that’s lost. Sara only sees Lola as a support mechanism, helping keep her fantasy alive otherwise their relationship is cold. Where has Lola’s childhood gone, or Sara’s experiences of bringing Lola up alone? Now all that is left is a slight reversal of roles – Lola has to parent Sara, which means that when she announces that she is getting married, it comes as a bit of a shock. The audience has been cleverly drawn into Sara’s nightmare world at Lola’s expense. Neziraj and Koliqi have made the audience understand what an all-consuming fantasy or obsession feels like and how much it drowns out real life. But it is Lola’s grip on reality in the shape of her impending marriage which allows her to challenge Sara’s version of events.  This is when it becomes possible to feel that Sara might eventually realise she can no longer live like this (though I’d add that such a horrific personal realisation demands another play).

Koliqi’s production is raw and deals with Kosovo’s legacy of war – although when chatting to me, Koliqi was clear that the number 1600 that is written on the squares of material given out to the audience at the end includes people missing from all sides of the conflict. It’s not a neat play but messy, like real life, with an open wound at its heart. It met the challenge of conveying early on that Din is not real by playing in a small space, allowing the audience to see that Lola never gives Din eye contact. It feels theatrically influenced by Ibsen and its messages are simple if devastating – that war continues its cruel legacies long after the last shot is fired. And that the tyranny of war finds different expressions. How many families in the Balkans, indeed everywhere, are suffering like this one?

Father and Father was shown at Kosovo’s Theatre Showcase 25th October in Prishtina. It was produced by INTEGRA. 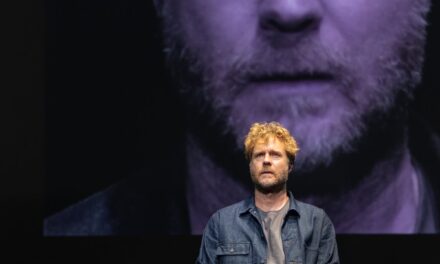