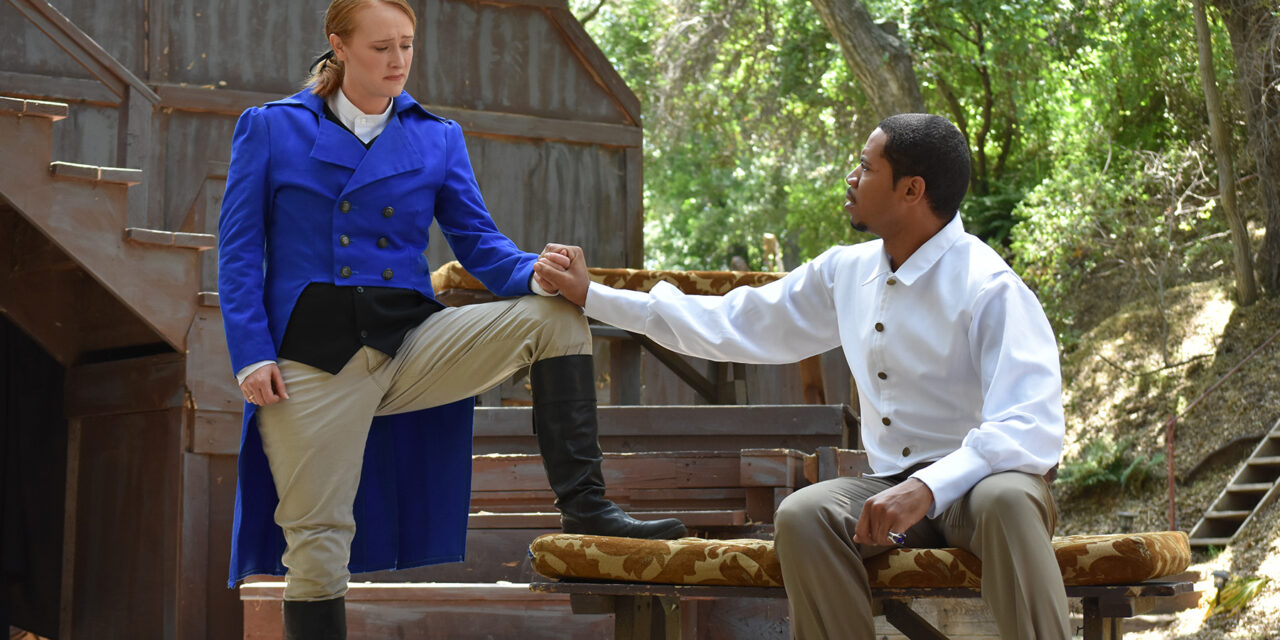 Tucked in the middle of one of Los Angeles’ many canyons, Will Geer’s Theatricum Botanicum is like something out of another place and time.  There is minimal parking in a dirt lot that is reserved for those with handicapped plates, or the nominal fee it costs to take a spot.  Most opt instead to reserve those precious few spaces for those who need them and park along Topanga Canyon Blvd.  The box office is a small wooden structure several feet away from a concessions stand that boasts all kinds of snacks and drinks and all around you, Will Geer’s interest in and love of plant life is evident.   The actors are visibly getting ready as you line up to enter the house and when that opens you get to see a playing space that is even more vast and idyllic than you could have imagined.

Will Geer was best known for his role as Grandpa on TV’s The Waltons but he also has a notable a place in history as one of many artists who defied Senator McCarthy’s efforts to get people to ‘name names’ during a red scare in America’s 1950s that we still haven’t quite recovered from.  Careers were destroyed when artists like Geer were blacklisted for failing to participate, so Will opened this theatre to feature those artists and folk singers on his property, including Woody Guthrie, Ford Rainey, and John Randolph.  When Will died in 1978, his family and fellow artists decided to turn the Theatricum into a professional repertory theatre and to say they have succeeded is an understatement.  They schedule their shows so that anyone might be able to see all six of the shows they have in rep on any given weekend in the summer. 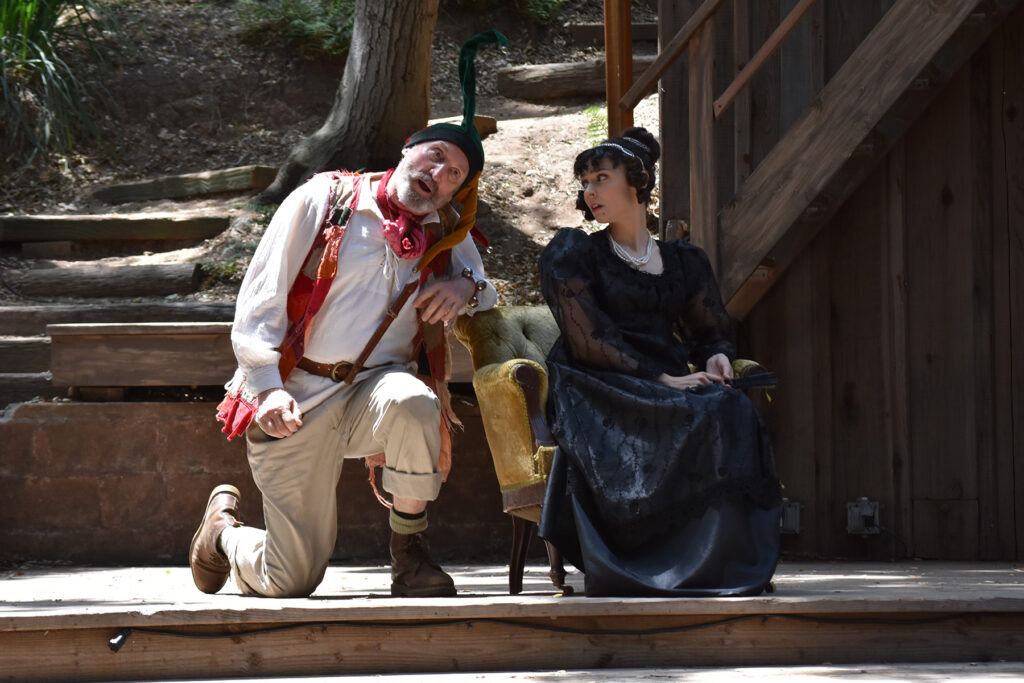 It is a lovely setting for William Shakespeare’s Twelfth Night, which opens here on Olivia and her party entering from far off in the woods, singing rather beautifully.  If music be the food of love, this production’s plate is overflowing with more than the original text prescribed.  When Viola speaks about losing her brother when she follows Orsino’s orders and goes to Olivia the first time to woo her for him, she sings, and she is not alone.   Characters often break out into song set to a recorded track, making this feel like a musical where men and women are so moved by events they have no choice but to sing.  This can result in complex harmonies from the main cast plus ensemble that totals twenty actors [perhaps twenty-two, if the men who alternate the role of Curio and Valentine take on ensemble roles otherwise].  It’s impressive to see, and hear.

Director Ellen Geer keeps things moving at a pace that is rapid enough to hold us on the edge of our seats waiting for what comes next without making the text unintelligible.  Willow Geer delivers a Viola who wears her heart on her sleeve yet still has the wit to mask it when necessary.  In Act 1, Scene 5, when Olivia asks her how she would show her love, it is clear that Viola is so rapt that she forgets she has placed Orsino where Olivia would want to be in her imagination and remembers herself in time to “Cry out ‘O-livia!’”.  Willow and her mother Ellen have found every shade of color possible in the character and it’s delightful.  Christine Breihan’s Olivia is strong-willed, fearless, and funny throughout but especially near the end when she mistakes Viola for her brother Sebastian and asks “Hast though forgotten thyself?  Is’t so long?” as she gestures widely to the flowing wedding gown she’s wearing. 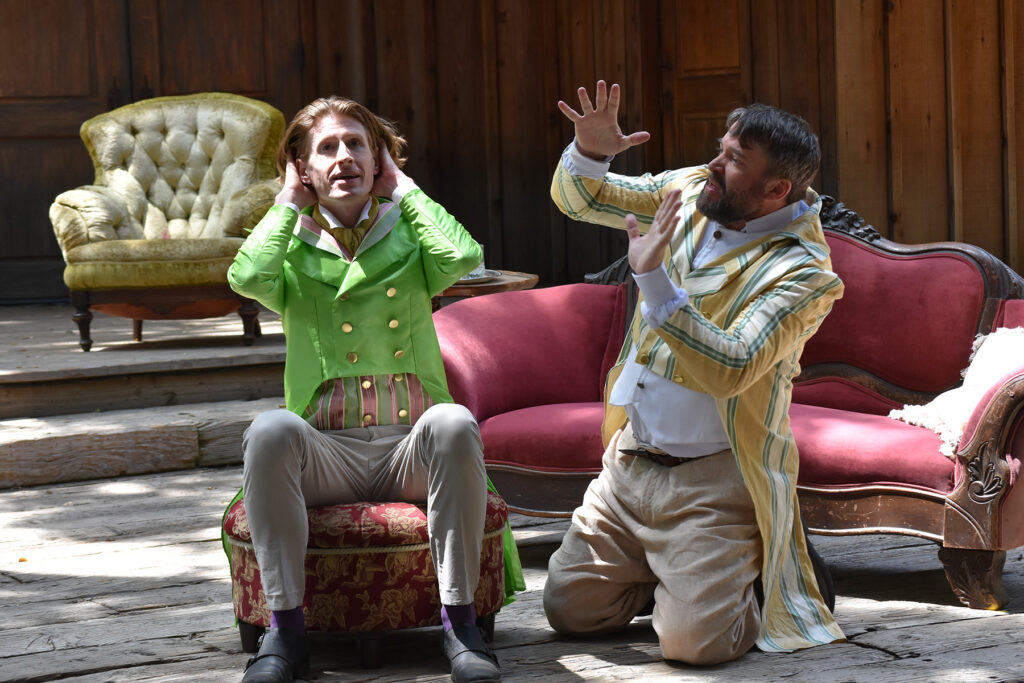 Everyone in the cast is strong, it’s hard to pick a standout performance for they balance each other so well.  As Sir Toby Belch, Christopher W. Jones is clearly a rogue seeking his own comfort and benefit at all times but he’s a lovable one for his relationship with Frank Weidner’s Sir Andrew Aguecheek steers just shy of feeling overtly mean-spirited or selfish and rather ends up feeling more like these two are actually friends.  Elizabeth Tobias plays Maria, Olivia’s waiting gentle-woman and Sir Toby’s object of affection/partner in crime who takes sheer delight in watching Malvolio suffer on a level that makes one hope to never cross her.  She takes over the role of Fabian in some scenes [Malvolio reading the letter, for example] while Time Winters’ jester Feste takes on the role in others.  Though Winters is good at playing the fool he does not usually play the instruments that back his songs – that task is left to three young ladies who introduce themselves as the Interns before intermission where they do what all outdoor Shakespeare companies must do – ask for donations [the program does not specify which of the ensemble actors play these roles]. 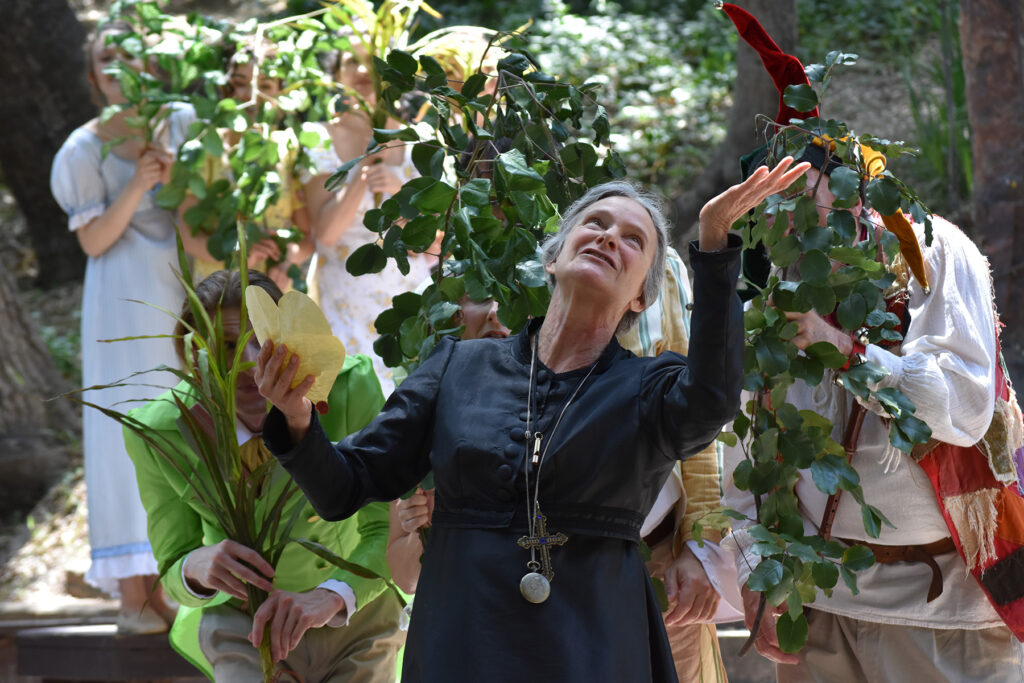 Cavin Mohrhardt is Sebastian and his abilities as a fighter and apparent gymnast add volumes to the production as both he and Sean McConaghy as Antonio clearly have fencing and combat skills [as does Christopher W. Jones as Sir Toby].  In contrast, the duel between Viola and Aguecheek is a masterful bit of physical comedy.  When Sebastian and Viola reunite, both Willow Geer and Cavin Mohrhardt make wonderful sense of the dialogue that seems to indicate Viola has forgotten her hopes that her brother might be alive.  Both are moved to tears and it’s tempting to join them.   Melora Marshall plays Malvolio – an interesting casting choice for a production that otherwise seems to stick to the script along classical lines – and dialogue is altered from ‘he’ to ‘she’ accordingly.  Her Malvolio is more stoic than foolish at the start, which makes her fall into seeming madness so startling.  When she is reprieved from her prison and discovers what has been done to her, her pronouncement that she will be revenged on everyone is so starkly dramatic, it’s tempting to wonder where a Shakespeare drama might have gone following Mavolio on her quest for revenge.

All said one couldn’t spend a finer two hours and change watching theatre outdoors anywhere else.  Bring a picnic basket and maybe a bottle of wine and carve out some time to enjoy the environment before you see the play and it will make your summer evening out at the theatre complete. 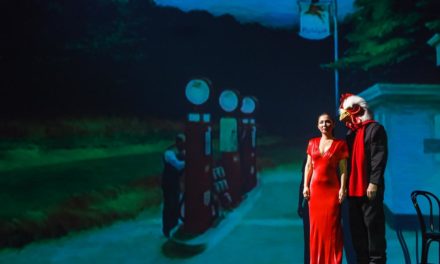