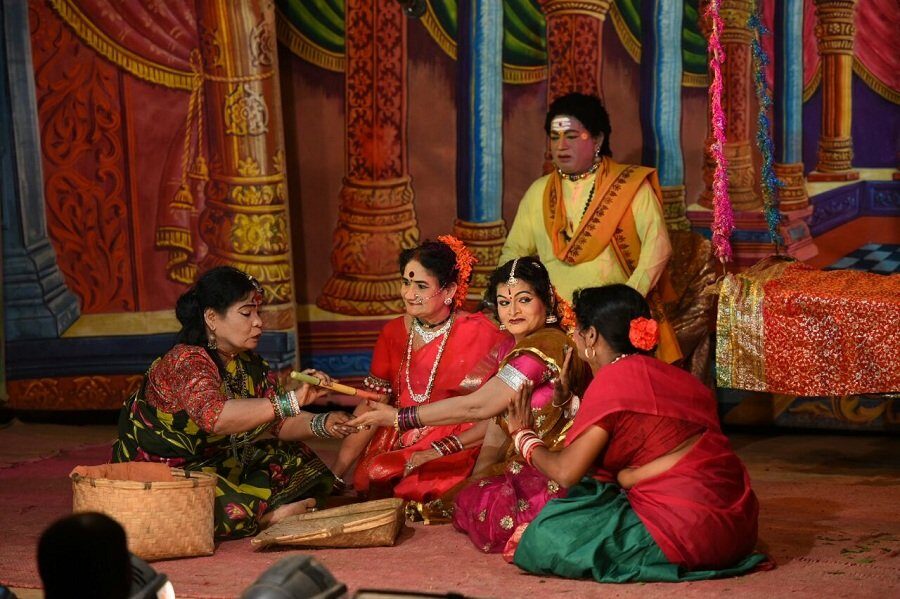 Struggling to make ends meet, more so during the pandemic, members of the Surabhi family troupe switched to the virtual platform in 2020 and presented around 15 plays via Zoom and Facebook Live. Jaya Chandra, a scion of the Surabhi family says, “Producer Shobu Yarlagadda (CEO, Arka Media) sent a team to initiate us into the digital platform. Since the plays were live, we faced a few technical glitches and the video quality was not up to the mark.”

Jaya Chandra thought of a “Dranima” a concept shared by Mamidi Harikrishna, Director, Department of Culture and Language, Telangana Government that aims to create a ‘cinema experience’ for Telugu natakam (drama) audience. 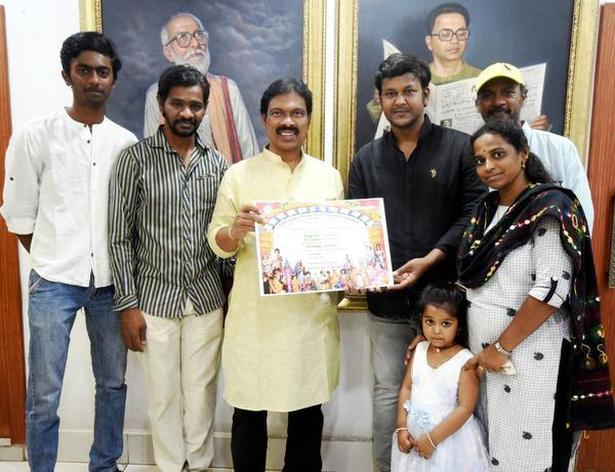 “He [Harikrishna] wondered if we could shoot plays with a green matte background so that it can be broadcast across villages. That didn’t happen but we picked up online streaming from that idea,” recalls Jaya Chandra adding how Achyuth Nagubothu (assistant manager, BookMyShow) gave the technical support and also guided them on designing visually attractive posters.

Three high definition cameras were set up at their space in February at Lingampally, Hyderabad, and the video and editing were handled by Sanjiv Patel and the team. Around 30 years ago, the then Andhra Pradesh Government allotted houses to Surabhi artistes at Lingampally, which was named Surabhi Colony.

Adapting to a new norm

During the pandemic, more than 50 families vacated their homes at Public Gardens and shifted to Surabhi colony. Since the Colony is close to a noisy railway track, the shooting would take place after 9 pm when the night fell silent. A two hour-play staged by seasoned theatre artists had to be shot for six hours owing to numerous retakes and close-ups for the digital medium. Actors learnt to adapt by applying less make-up than what they normally do for a regular play, and the lighting was enhanced with 10 LED lights.

Jaya Chandra recalls how the filming created a lively atmosphere on the set. “An artiste’s wig came off during a scene in Bhakta Prahlada and the five-minute scene had to be shot again. If that had happened during a live show, the audience would have laughed and the play would still have continued.”

The group spent ₹5 lakh for the online exercise including artists’ remuneration. Their readiness to adapt to the newer format and discipline is what made it possible, believes Jaya Chandra. “Our performances never depended on the audience; we had the same energy and enthusiasm, whether it was for a single person or 100 people in the audience. Our performance has remained the same in front of a camera too.”

He hopes this virtual experiment will create more interest in Telugu natakam.

“Surabhi theatre lovers can watch the performance from anywhere in the world. Depending on the response, we can have new plays every month with newer themes. The next generation of Surabhi members can explore this virtual option.”

Sri Venkateswara Surabhi Theatre plays are on till April 27 and tickets are priced at ₹100. For details, visit: www.bookmyshow.com

This article was originally posted in The Hindu on March 29, 2021 and has been reposted with permission. To read the original article, click here.