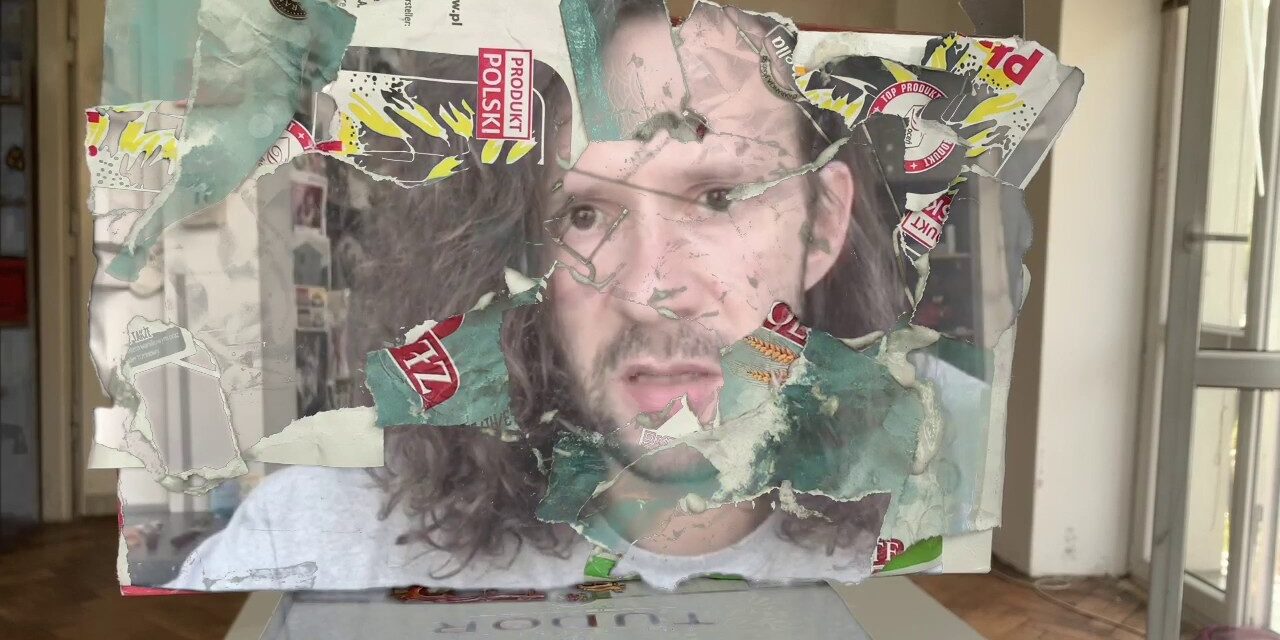 Revolution: A Response to a Systemic Crisis

Those theaters of ambulatory care which see the pandemic primarily as a crisis affecting communities on a systemic, national, or even global scale, tend to recommend a different sort of remedy. Where they work with individuals, theaters of ambulatory care administer treatment in the form of relationships; however, where they look at ideas, social contexts, or political issues, their recommended therapy tend to focus on shaping crisis discourse, speaking out on matters of importance,  and pointing out systemic weaknesses. The purpose of all this is not so much to devise an alternative course of action, as to demarcate the path to a revolution.

As Alina Gałązka of Komuna Warszawa[56] has put it, venting her disappointment:

this crisis could have caused a rethink of how things were [in alternative theater]. There was  a point when one really could have reflected on whether everything was going in the right  direction. Sadly, I don’t think any of our so-called policy-makers want to give it any thought.[57]

When it comes to Komuna (and other theaters that take a political stance), ask ing “how things are” is less about individuals (and when it is, then only indirectly): it pertains, first and foremost, to a community, examined from a perspective that transcends the local context, or the context of any one group. In their systemic identification of the threats posed by the pandemic, revolutionary theaters of ambulatory care focus on saving the community, understood in much broader terms than those of theater and its audience/participant group. It is quite common for this type of theater to take up non-governmental activities, in the spirit of opposition and antagonism. Theirs is a politically engaged theater, with politics understood  as “a sphere of debate on what kind of community and what kind of public life we want; what we find acceptable and with what provisos; and what we disown or seek to eradicate.”[58] Theaters which fit this description do not regard the crisis of the pandemic as a source of new dangers, but rather as a sort of lens focusing the difficulties which were been there. That is why revolutionary theaters of ambulatory care are spending the pandemic carrying on developing the themes they had pursued before – the only difference is that they do it using whatever language and gestures are available during lockdown.

Having joined forces with the Studio Theater, Komuna asked creatives to contribute simple statements about the current situation, as part of their Kwarantanna (Quarantine) Project. Komuna made no secret of the fact that theirs was primarily a welfare scheme, designed to offer financial support to creatives who, in the new circumstances, were no longer able to work. Therefore, the resulting series of video performances, is, on the one hand, an important contribution to the debate on the precarious nature of independent creative work; on the other, the project offers genuine financial support – though it amounts to yet another Band-Aid solution, given that a reform of the arts funding system remains unattainable. This issue was addressed directly in Przydałoby się (I Could Use It)[59] by director Weronika  Szczawińska and actors Piotr Wawer Jr. and Maciej Pesta. “Could you use twelve hundred zlotys right now?” Szczawińska asks Pesta on the phone. “Yeah, I sure could” Pesta replies. We can see his mouth and his sad gaze on the screen of Wawer and Szczawińska’s smartphones, as the pair spend lockdown together.

Teatr Ósmego Dnia [60] (The Eighth Day Theater), Poland’s legendary alternative group, has likewise taken to providing patronage during the pandemic. Like Komuna and Studio, the Eights have been carrying on with their usual work: against a background of systemic underfunding of the arts in Poland, the Eights offered to support off-theater. They called on creatives to submit funding applications: the winning productions would be staged as part of the OFF: PREMIERY / PREZENTACJE (PREMIERES / PRESENTATIONS) festival, once restrictions had been eased. This kind of support was vital during the pandemic, especially to emerging ensembles, for whom opportunities to earn a living in the theater have all but dried up. “It’s a huge blow to all those only just starting out,” says director Anna Smolar, “I can see the brutal impact this situation has had on some in our circle. They are at the start of their professional lives, and already they have very little elbow room.”[61] “If I had known there was going to be a pandemic, we wouldn’t have founded Kobietostan,” admits Agnieszka Bresler, “It would have been easier to survive had we stuck to the organizations we were once affiliated with.”[62] According to Martyna Dębowska, who is part of the alternative scene in Wrocław, “there were no guidelines for NGOs and alternative theaters. We were left to our own  devices.”[63] When the state fails to offer independent creatives any support that will actually suit the way they earn a living, grassroots funding campaigns launched by theaters of ambulatory care become a thoroughly tender enterprise, in the sense of the term recently highlighted by Olga Tokarczuk. According to the 2018 Nobel Prize winner, “tenderness is deep emotional concern about another being, their [“its” suggests “tenderness’s”] fragility, their unique nature, and their lack of  immunity to suffering and the effects of time.”[64] Not only were her words used as a motto for the Teatr Ósmego Dnia call for applications, but they also appear to be the best way of summarizing similar aid schemes.

Laying bare the state’s weak points, exacerbated by the pandemic, can in itself be soothing. The recent experiences of the Naumiony Theater demonstrate as much: the work of the ensemble boldly addresses such issues as Upper Silesian history, much to the inconvenience of the authorities. The theater is firmly embedded in its mining community; and working almost next door to a coal mine, closed due to a high number of Covid cases, has obviously spurred the Naumiony ensemble to speak out regarding what, politically, has always been a thorny issue. Members of the group and their families have been directly affected by the decision to close the pit during the pandemic, and the closure has reopened old wounds and brought back the pain of unfulfilled promises. In addition, it has pitted various groups within the community against each other, aggravating latent antagonisms:  people have been divided into culprits and their victims, those under threat and the threatened – all of which has been fueled by a media narrative presenting Silesia in general (and mining communities in particular) as a “red zone,” standing out on the map of Poland. At the time of writing, the Naumiony Theater was working tirelessly on exploring these issues in as much depth as possible.

What actually emerges when the three forces – theater, the community and the pandemic – coincide? The answer to this question depends primarily on a particular ensemble’s chosen perspective. One set of images will emerge for creatives working at the micro-social level – in other words, those working with individuals. Those taking a more global perspective will be sensitive to altogether different concerns. At the micro-level, what one notices is loneliness, an assortment of fears, and a yearning for relationships, community and contact. At the macro (socio-political) level, one becomes aware of the challenges brought about by the pandemic; issues needing systemic change, and capable of triggering a revolution.  During the pandemic, emergencies take the form of either human drama or a crisis,  be it local or global. From a microscale perspective, this entails broken bonds,  and on the macroscale – world systems with feet of clay. In the former situation –  a trilateral combination of creative / pandemic / the need to be part of a community – the choice of remedies is determined by the creative’s relationship with their community. In the latter, the choice of treatment depends to a greater extent on the theater’s relationship with the forces at play in a crisis, or the community’s relationship with their way of life during the pandemic. Preliminary diagnoses provided by social theater are closely linked to the semantics of emergence: in order for something to finally emerge, the tension between the forces clashing in the process needs to be defined. When social theater tackles the pandemic, the clash occurs between three, rather than two, such forces. This is because social theater is as embedded in its community as it is in its art. Systemic relations between the sides involved in the clash, and the clashing forces, are ever-changing, and the process itself can never be completed, cannot conclude in providing a lasting and robust diagnosis.

The analyses and interpretations of the pandemic’s fluctuating emergences generate “low theories.”[65] The concept of low theory acknowledges “knowledge from below” and makes it part of its system of thought. The term “knowledge from below”  encompasses all forms of “naive knowledges, located low down on the hierarchy,  beneath the required level of cognition or scientificity,”[66] devised both communally and on the fringes of the community. Underlying this approach is the exploration  of alternative definitions, as “low” status entails working against dominant rules  “that stand outside of a conventional understanding of success.”[67] Social theater will  always remain a theater of failure, where failure is understood as “a refusal of mastery, a critique of the intuitive connections within capitalism between success and profit.”[68] This kind of theater never stops observing, defining its goal, in line with  Solnit’s insight that “one of our main tasks now […] is to understand this moment,  what it might require of us, and what it might make possible.”[69]

To be able to grasp the ever-changing relationships within larger structures, we need to turn our attention, and give some thought, to local experimentation, the act of beginning from scratch over and over again; a sort of Band-Aid strategy, the makeshift quality and symptomatic treatment offered by the theater of ambulatory care. However, whatever the strategy chosen by a particular group, the principles introduced by social theater at the time of writing, as well as the remedies it recommends in its outpatient clinic, are determined by caring for the local ecosystem and the community which shapes that ecosystem – and determine them in turn. In this ecosystem, exchange relies not on completing the circle, but on a never-ending spiral of mutual interaction, based on neighborliness: an essential quality in normal circumstances, but vital during a pandemic.

56. Komuna Warszawa was founded in 1989 by director, musician and fine artist Grzegorz Laszuk  as an “anarchist community of action.” One of Poland’s leading avant-garde theaters, Komuna’s experiments combine performative arts, video installation and music. Usually written from scratch,  their productions address social and political issues, seeking new forms and means of expression.  Other ensembles are invited to perform at Komuna; exhibitions and concerts, talks and lectures are all organized. See https://komuna.warszawa.pl/_mainen/.

60. Teatr Ósmego Dnia is Poland’s best-known theater group. Rooted in countercultural student theater of the 1960s, it was founded in 1964 by Lech Raczak and Tomasz Szymański who studied  Polish at the Adam Mickiewicz University in Poznań. The Eights’ politically engaged productions were scathing, ironic commentaries on the realities of the then People’s Republic of Poland; and members of the ensemble were repressed by the authoritarian state. Today, the Eights are a legend of Poland’s alternative theater, a symbol of engaged theater, throbbing in rhythm with major social and political events. See http://teatrosmegodnia.pl/en/.

69. Solnit, “The Impossible Has Already Happened.”

This article was translated by Joanna Błachnio and first published by Pamiętnik Teatralny 2020/4. For the original article go here. 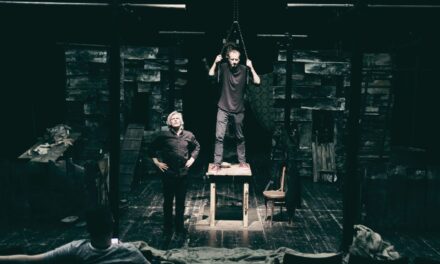