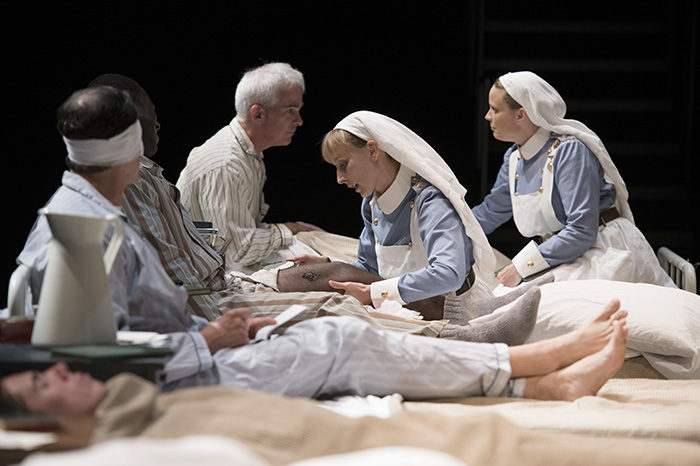 NIAGARA-ON-THE-LAKE, Ont.— Nearly a century ago, Winnie-The-Pooh creator A.A. Milne wrote a now-forgotten one-act play called The Man In The Bowler Hat. It dealt with the disruption of a conventional middle-class household by a sequence of melodramatic events that in performance could be done for real or, more commonly, take on the texture of a Monty Python spoof.

But the script plays a trick on the audience, revealing at the end that what playgoers had actually been seeing was a mere rehearsal of a play by a group of earnest thespians. The Man In The Bowler Hat used to show up frequently as a competitor in drama festivals but it was not a favorite of adjudicators who had no way of judging whether what they were seeing was aiming for quality or setting out to be deliberately awful.

A similar dilemma confronts anyone attending the Shaw Festival’s unfortunate evisceration of Shakespeare’s Henry V. Is actor Gray Powell supposed to be this inadequate in the title role?

Who knows for certain? You see, directors Tim Carroll and Kevin Bennett have concocted this idea of conveniently supplying a group of Canadian soldiers in a World War One dug-out with a few copies of Shakespeare’s Agincourt saga so that they can while the time away by rehearsing the play—presumably for some future performance.

So possibly it’s intentional that Gray Powell, playing the officer who plays the King, should give us a Henry of droning monotony. Or perhaps the purpose is to turn him into some kind of anti-hero: hence the embalming process which the two great speeches—“once more into the breach” and Crispin’s Day—have undergone for this production.

But again, maybe, is it a case of everyone—from the normally dependable Powell down—floundering futilely to make an unworkable concept work?

Artistic director Tim Carroll’s programming for the current festival season includes three productions that seek to commemorate the hundredth anniversary of the end of the First World War. Bernard Shaw’s edgy wartime satire—O’Flaherty V.C.—has shown up in a somewhat misconceived revival. And director Peter Hinton has tussled with Oh What A Lovely War—a legendary piece of collective theatre from the 1960s—to deliver, on the balance, an honorable revival.

Finally, we have the muddle of Henry V. Festival publicity for this production talks about “the death-haunted, morally ambiguous world of the play” and how it enters the world of these Canadian soldiers. It promises “a powerful exploration of what it means—and costs—to fight for king and country.” There is nothing to fulfill this vision in the production at the Jackie Maxwell Studio Theatre.

We also have co-director Kevin Bennett’s thoughts in the printed program: “. . . we have done something special by creating a setting in which people from 1918 are playing, experiencing, and debating the text of Henry V, as seen as through the lens of soldiers in a World War One dugout. In this way, a conversation is started because within the 1918 setting the characters are both actors and audience.”

At a recent matinee performance, that “conversation” appeared to be going nowhere, given the number of playgoers who failed to return after intermission. This Henry V will infuriate people who know the play because of the way it has been stretched and torn apart to serve some kind of agenda. And it will bewilder theatergoers who don’t know Henry V because of the way the play has been deconstructed with both male and female actors undertaking an array of characterizations—in one instance up to 10 for a single performer—with seemingly little concern for making them distinctive. A lot of sorting-out is required for the playgoer, and even if you think you know the play, keeping track of who is actually who can be a disheartening experience. It is, frankly, incoherent. The production seems to have been conceived on the smug assumption that what it’s doing is sufficiently important to absolve it of the need for narrative clarity and psychological plausibility.

The fragmentation of characters leads to a fragmentation of Shakespeare as well. Don’t expect the comedy involving the Welsh captain Fluellen to work—especially the famous business involving the leek. And beware of that normally delightful scene in which the French Katherine struggles to learn English: it’s now a mincing drag routine that will win no plaudits from the LGBQ community.

The muddle increases in the second act with all of them in the hospital recovering from wounds, but with the help of their nurses, still struggling to get through Shakespeare’s play. It’s not uncommon for a highly capable theatre director to come up with a fascinating concept for a play, make a commitment to bring it to the stage, and then fumble badly in making it work. Such failure is depressing to watch.

There are capable people in the cast—so we get occasional good moments from the likes of Patrick Galligan, Ric Reid, Graeme Somerville, and Yanna McIntosh. However, the overall performance quality seems hobbled by the play-within-a-play concept. We end up with soldiers inexpertly playing at being soldiers.

The bottom line is that the creators of this offering have failed to achieve a persuasive dramatic connection between Henry V’s victory at Agincourt and the carnage of World War One. It can be done—witness John Wood’s 1989 Stratford Festival production that began with veteran actor William Needles as an aging Legion veteran urging the Muse of Fire to transport us back to the 14th Century.

Wood’s production narrowed matters to certain timeless concerns—among them the nature of heroism and the contrast between idealized perceptions of war and the grimmer realities. But it had the good sense to listen to what was being said in the play—and it maintained a clear narrative and philosophical line, successfully avoiding the kind of preposterousness that leaves the Shaw Festival’s treatment floundering like a beached whale.

So was it a good idea to attempt Shakespeare at a festival with a mandate significantly different from that pursued at Stratford? Ideally, a company as gifted as the Shaw’s deserves the opportunity once in a while to test its acting muscles with a verse play. However it’s several years since it did so with Christopher Fry’s The Lady’s Not For Burning, and the current Henry V might be best chalked up as an unfortunate aberration.

But artistic director Tim Carroll has displayed a refreshingly adventurous mind since he took over the festival. And there is a way of sneaking a bit of Shakespeare into a future season. He could program Shakespeare’s late romance, Cymbeline, replacing its final act with the one that the festival’s namesake, Bernard Shaw, wrote in 1937. That would be fun.

This article appeared in Capital Critics’ Circle on September 4, 2018, and has been reposted with permission.