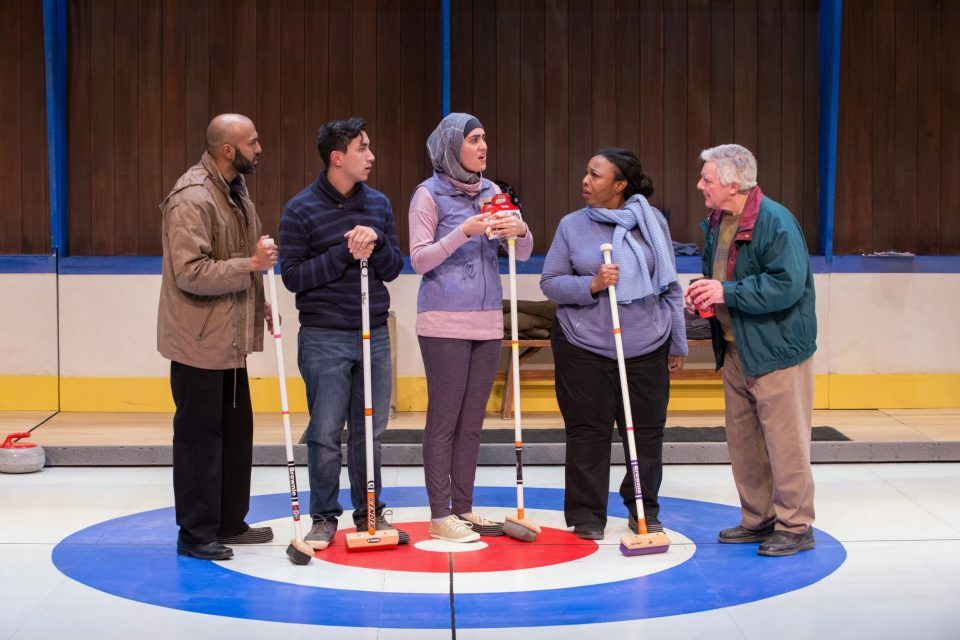 In the context of these politically divisive times, the message of Mark Crawford’s recent play, The New Canadian Curling Club, is undoubtedly well-intentioned. This story of four immigrants who take up curling for the first time, and overcome the prejudice of their coach makes for a feel-good show overall which imparts valuable lessons about belonging and acceptance. This production at TIP is directed by Andrew Kushnir, and makes the most of the play’s comedic moments; It draws plenty of laughs from the audience. There are moments, however, where I was occasionally taken out of the immediate action of the play. While the main story of Crawford’s play is solid, certain subplots are handled clumsily.

The premise revolves around a “learn to curl” class that is specifically geared towards newcomers to Canada. The class consists of long-time Jamaican resident Charmaine, an established Indian immigrant Anoopjeet, a Syrian refugee Fatima, and Chinese medical student Mike. They are met with a rude start when the instructor they’re supposed to have is replaced by Stuart: the arena’s prejudiced ice maker. His family’s long association with curling, combined with his displeasure at the news of Mike dating his granddaughter makes for initially bitter interactions between him and the others. These interactions, fraught as they are, serve to show the narrowness of Stuart’s thinking and the fallacy of the assumption that all immigrants have an easy time adjusting.

Each of the four amateur curlers are well-realized by the actors; They provide humanity to the diverse experiences they are meant to represent. Jenni Burke appropriately balances Charmaine’s sassy but stalwart demeanor. Her long experience in Canada enables her to act as both a mentor and a median with Stuart. Richard Young is similarly endearing as Anoopjeet; infusing humor and liveliness into all his interactions with the others. There is also a serious side to his character which comes out in his own story. We learn of his struggle to find employment and adequate housing upon arrival in Canada. Richard Lam effectively captures the quiet strength of Mike. Though his Chinese accent slips a bit at times, he ably holds his own in the tête-à-têtes between Mike and Stuart. Parmida Vand is also quite credible as Fatima, whose shyness and confusion in navigating a new language and country are well expressed.

The Character of Fatima suffers from a lack of adequate narrative development which leads one to wonder if more was meant to be included in the play. The subplots of her brother being temporarily missing in Syria (subsequently being prevented from sponsorship to immigrate), and her parents’ apparent disapproval of her playing curling is depicted only through repeated hints to other characters. Information is revealed in a rather blasé and undramatic manner. The inclusion of these subplots would suggest that the playwright may have thought to comment on the particular challenges facing Middle Eastern and Muslim refugees, though they are broached only in a superficial way.

Again, the limits of the script are revealed in Stuart’s character arc. In the first act, he expresses only contempt for those he’s teaching and shows no signs of relenting in his prejudiced attitude. And he does this despite overtures that are made by his students. It is only in the second act that he begins to come around. One can question whether his change of heart is adequately shown onstage so as to be plausible by the end.

The curling rink set design by Steve Lucas is especially impressive. The ice, curling props, the authentic-looking blue door, and exit sign make for a set that is as realistic as it is convenient for plot purposes. The open-paneled ceiling is cleverly positioned at a sloped angle to allow both fluorescent and regular stage lights to seep through to the playing area. The red and white uniforms with each character’s name worn during the bonspiel matches are a nice touch to emphasize their symbolic belonging as Canadians.

The New Canadian Curling Club is a delightful show which rightfully pokes at certain assumptions held about immigrants. It reminds us that not all circumstances for those who come here are the same. At the same time, the subplots around Fatima’s family could be integrated with the larger story, and the transformation undertaken by Stuart could be better explicated. All this in order to provide more credibility to the message the show wants to send. Good intentions, but in this case would benefit from some narrative revision.

The New Canadian Curling Club runs until October 20 in the Springer Theatre at the 1000 Islands Playhouse in Gananoque, ON. For information and tickets, see http://www.1000islandsplayhouse.com/the-new-canadian-curling-club/

This article appeared in Capital Critics Circle on October 3rd 2019, and has been reposted with permission.