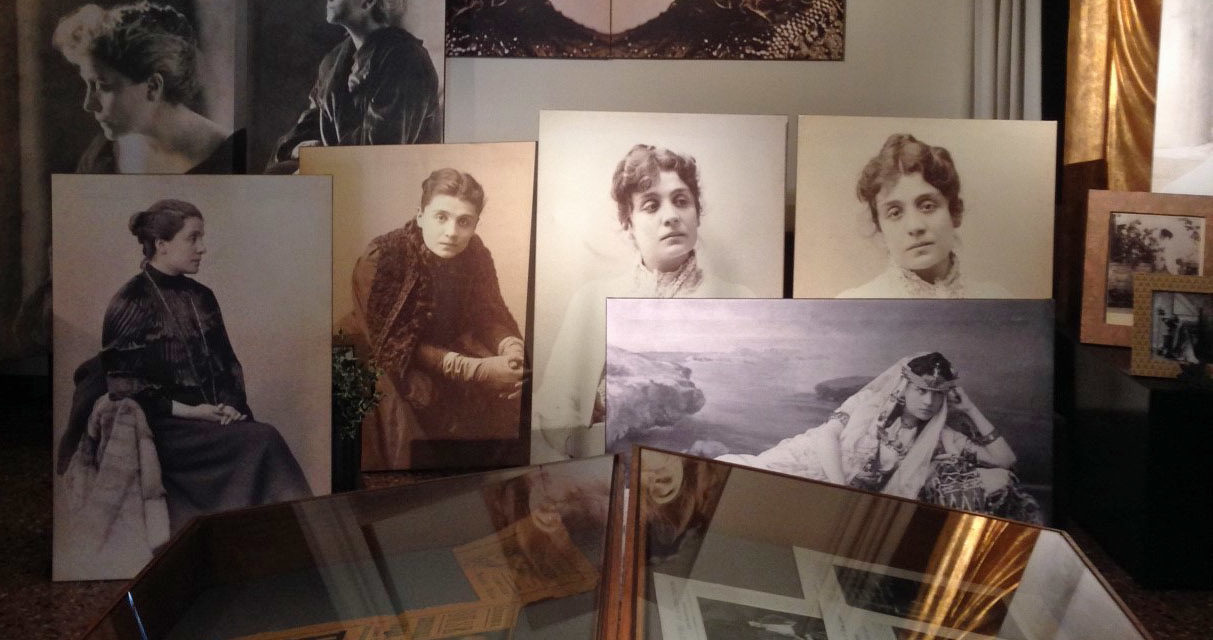 In November 2011, in Venice, the Giorgio Cini Foundation officially opened a new permanent space created as a sort of “home-museum”: Eleonora Duse’s Room. Here, from 18th March to 18th December 2016, we can admire a photographic exhibition that narrates her myth: From portrait to icon. The charm of an actress in photography (curator Dr. Marianna Zannoni).

These precious photos are held in the Duse Archive, in the Foundation’s Study Centre for Documentary Research into European Theatre and Opera (director Prof. Maria Ida Biggi) and are very useful for the knowledge of the artistic and human personality of the great actress.

This exhibition is a fascinating trip into Duse’s life, based on the visual dimension of her staging. Among the many roles of her career, we can recognize Cleopatra (Anthony and Cleopatra, by Shakespeare), Mirandolina (The Mistress of the Inn, by Goldoni), Santuzza (Rustic Chivalry, by Verga), Margherita Gauthier (The Lady of the Camellias, by Dumas), Anna and Francesca (The Dead City and Francesca da Rimini, by d’Annunzio), Vanna (Monna Vanna, by Maeterlinck), Rebecca and Hedda (Rosmersholm and Hedda Gabler, by Ibsen), and others.

Between the end of the 19th and the beginning of the 20th century, many of these photos were used also on postcards: with them, Duse travelled around the world—again and again—reaching audiences in countries that were not included in her theatrical tours. Today, they are proof of her charismatic performance, celebrating her artistic memory. These images had traveled beyond the boundaries of space and time, with a surprising vitality, and their iconic impact continues to be relevant—also for the new millennium.

This exhibition is an occasion to recognize the international diffusion of Duse’s images, considering the style of the photographers who worked with her in Italy, Spain, and America: Giovanni Battista Sciutto, Mario Nunes Vais, Pau Audouard, Aimé Dupont, Edward Steichen, Arnold Genthe, and others. They met Duse in different periods of her life but made the same effort, in order to immortalize her acting. They tried to show the feelings of her female characters on the stage, with her spiritual and technical disposition for each play.

The photos reveal, on the face of this woman, the progressive changes. But, for Duse, there is no age limit: she was charming in her youth, as in her old age. In his book As I Remember (New York: Reynal & Hitchcock, 1936), the photographer Arnold Genthe describes the emotion of working with the old actress in New York, in 1923: “One in answering a reporter who had asked the usual question, I replied that I considered Eleonora Duse the most beautiful woman who had ever sat for me.—You mean, of course, when she was young?—, was the retort.—Not at all . . .” (p. 161).

With her acting, Duse was truly able to reach the hearts of people all over the world. This photographic exhibition is an opportunity to discover the many faces (and many sides) of a supreme artist who enchanted playwrights, critics, and audiences. Observing all these beautiful images, we feel a sensation of life.