The Magical World Of Leonora Carrington 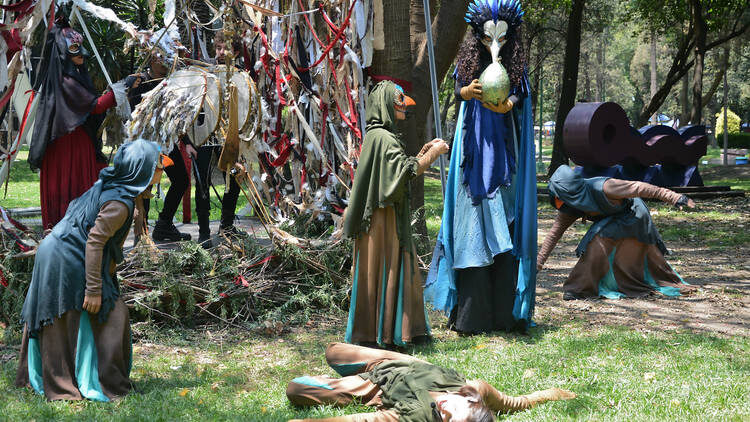 The gardens at the Museum of Modern Art in Mexico City have been the site of Emmanuel Márquez’s adaptation of a play by surrealist painter and novelist Leonora Carrington since May 5 and will remain open to the public until August 25, 2018. Strictly speaking, Opus Siniestrus is not so much a play as an event that is performed on Saturday mornings by students of the Compañía Nacional de Teatro del Instituto Nacional de Bellas Artes. Some critics classify the piece as a surrealist farce written in both verse and prose. Carrington wrote the play in 1969 and it was supposed to premiere in New York City in the 1970s, but due to lack of funds, it never opened.

Actors dressed in bird costumes welcome spectators and invite them to become part of a woman’s magical world. The audience walks along the museum gardens and witnesses four performances surrounded by giant eggs and totem poles. The scenes are musical performances and poetic interventions that portray life and death, a religious ceremony, a tribute to the gods, or an enchanting experience. The costumes, puppets, and masks were all designed by Carrington herself, and the original sketches can be found inside the museum.

The four performances are part of the retrospective of Leonora Carrington paintings and sculptures currently on display at the Museum. Her works of art are on loan from the Metropolitan Museum of Art, The Pierre and Maria-Gaetana Matisse Collection, the Tate Modern, Edward James Foundation, as well as Mexican entities such as the Museo Nacional de Antropología, the Fundación BBVA Bancomer, the Colección Pérez Simón, and the Galería de Arte Mexicano.

The play was translated by Dr. Alfredo Michel Modenessi and the costumes were created by Estela Fagoaga. Director Emmanuel Márquez explained that the play addresses such themes as the annihilation of women and the potential threat of sexually transmitted diseases. He points out that while the original version of the work is marked by an absence of hope illustrated, for example, by a lizard eating an ostrich egg, symbol of potential life, of fertility and creation, his adaptation brings to light hope’s presence which he perceives in the very act of laying an egg, that is, in the possibility of future and of life.

Opus Siniestrus is one of two plays written by Leonora Carrington. Her other play entitled Penelope was staged by Alejandro Jodorowsky in 1957. http://www.timeoutmexico.mx/ciudad-de-mexico/teatro/opus-siniestrus-teatro-inedito-de-leonora-carrington