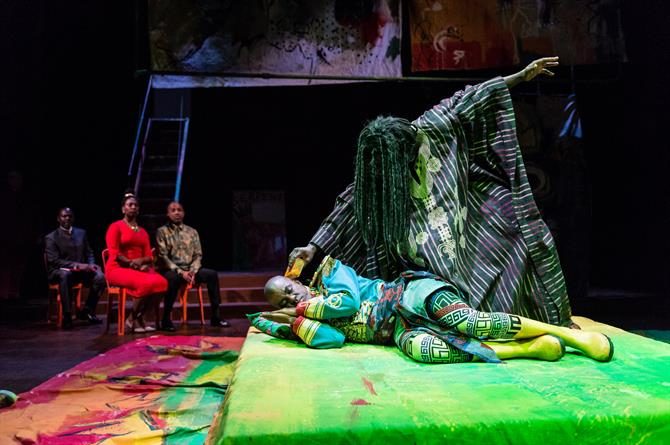 Setting Shakespeare in modern Africa is risky business for a white first-world  director. That said, the temptation is perfectly understandable. No place on today’s earth struggles more prominently and dramatically over democracy, tyranny and the corruptions of power—Shakespeare’s major political themes. Still, however well handled, this choice by any white artist is bound to seem exploitative, touristic, and opportunistically exotic to some. Then there’s the inevitable problem of spotty relevance (no contemporary setting ever fits Shakespeare perfectly). The more specific a setting is the greater the danger of encumbering a play with extraneous baggage. And making it nonspecific risks falling into a reductive generalization about Africa.

Simon Godwin negotiates this minefield as well as any director I’ve seen. His predominantly black Hamlet—the first in the Royal Shakespeare Company’s 141-year history to employ a black actor as the Danish prince, shockingly—is unforgettably vivid. It is eclectic in its African references, as was Gregory Doran’s all-black RSC Julius Caesar, which visited BAM in 2013. Yet the effect here (even in the cinema version, which I saw) is unusually compelling. The African environment feels more personal, and Paapa Essiedu’s performance as Hamlet is so strong that he soon becomes the only gauge of importance and relevance we care about.

Esseidu is a young-looking 25 and the appeal of this Hamlet is decidedly youthful. It pulsates with color, vigor, and energy. Emphatic drumming punctuates nearly every scene, and Hamlet shares clubby-cool gestures and facial expressions with every other character in his generation. The bright color is striking in a play so suffused with gloom, grief, and reflection. Funereal clothing in the first court scene quickly gives way to vivacious colored fabrics and resplendent polychrome prints. In feigning madness, Hamlet transforms into a paint-spattered graffiti artist, a Basquiat-wannabe who prances about with chic, day-glo stains on his face and grungy suit. The Act 5 fencing match becomes a ritualistic wooden-stick fight with Hamlet and Laertes stripped to the waist, both wearing sexy red pantaloons. 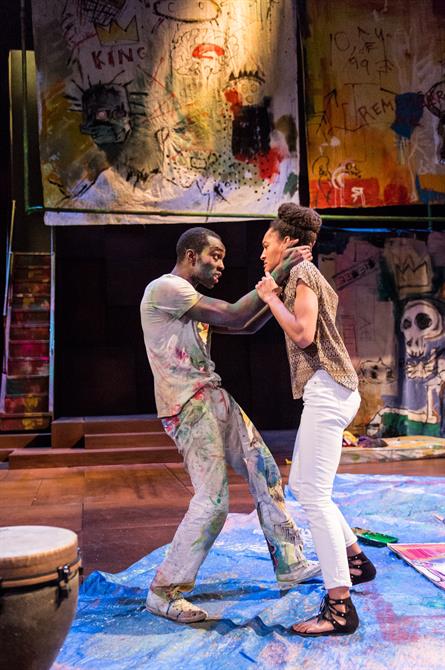 Essiedu’s Hamlet is every inch a college kid. Godwin’s production begins with an invented prelude in which beaming Hamlet receives a diploma from Wittenberg University (whose Ivy Leaguish seal hangs upstage) only to be rushed off the dais to plod seconds later behind his father’s coffin while his mother (Tanya Moodie) and uncle (Clarence Smith, in military regalia like a Sani Abacha or Idi Amin Dada) gaze down from a high window. The implication is that this popular, privileged foreign student, soaking up the civilizing light of an American liberal arts institution, was suddenly yanked from his campus idyll to face nightmarish events back home. Whatever ideas of normalcy his education gave him provide no preparation for treacherous Elsinore now.

Essiedu weeps openly and copiously in the Act 1 court scene—a perilous choice, given the limitations it would seem to impose on Hamlet’s subsequent emotional journey. Yet Esseidu makes it work. His anguish, so obviously sincere, sets Claudius on edge, threatening his tight control over the proceedings. Then Essiedu shifts and deals frantically with Horatio (Hiran Abeysekera) and Marcellus (Theo Ogundipe), moving swiftly after that through giddy gladness, gentle wit, sober self-possession, and more. The main impression is of a kid not yet fully formed, a human work in progress sidetracked and possibly stunted by his encounter with the ghost. He doesn’t know himself why he feels so distraught and grasps at the prospect of violent revenge to find psychological answers.

This sense of his vulnerability in arriving at a newly unsafe childhood home serves as the production’s emotional heart. Hamlet finds himself a misfit just when he was beginning to feel well-adjusted, it seems; and what we witness is his search for a new emotional foundation that fits his idealistic and creatively impulsive self-image. The graffiti artist is a flagrant affectation, a safe, late-adolescent form of acting out that is borderline irritating. What keeps it vaguely plausible is that it’s not overdone or overintellectualized. Essiedu wears his intelligence lightly, trying to wield it as a tool of social connection whenever possible. All of his big speeches feel electric with surprise, obviously the fruit of fresh cultivation in Essiedu’s unique mental garden. Sometimes he even seems actually mad, as when he violently attacks Ophelia (Natalie Simpson) toward the end of the “nunnery” scene.

As for the African setting, that it hangs together as a convincing environment at all is downright miraculous given how unassertive and ad hoc it is. Godwin says he took a research trip with his creative team to Ghana, Essiedu’s ancestral home, but apart from Ghanaian drum music, the show’s appearances and sounds are rather generalized (one of the gravediggers sings a calypso tune, for instance). This is Denmark as a generic West Africa where the people happen to speak Renaissance English.

As I thought about why this manufactured place worked so well as a setting a wonderful recent book came to mind: Elizabeth Maddock Dillon’s New World Drama: the Performative Commons in the Atlantic World. Dillon uses the term “commons” in both its abstract political and concrete geographical senses, meaning both a locus of power and sovereignty for a people and a public place of common use. The theater, she points out, is a quintessential commons not only because “audience and actors together form an assemblage that both embodies and represents the collectivity of the people” but also because the new configurations of that collectivity encountered in theater often stretch and challenge spectators’ notions of how their community is and ought to be defined.

This idea captures the spirit in which Godwin plies the treacherous waters of interculturalism. It’s not to advertise the brilliance of any new cultural parallels he has discovered, or to make any armchairish claims of universalism, or even (I believe) primarily to offer opportunities to talented nonwhite British actors. The thrust seems to me an impulse to use the stage as a vibrant performative commons where a truly fresh, persuasively complex, and marvelously inclusive image of contemporary life may be imagined and enacted. Considering all the terror of Others roiling among us at the moment, on both sides of the Atlantic, this is an eminently worthy and welcome vision.

Godless Clergy Members in “The Unbelieving”