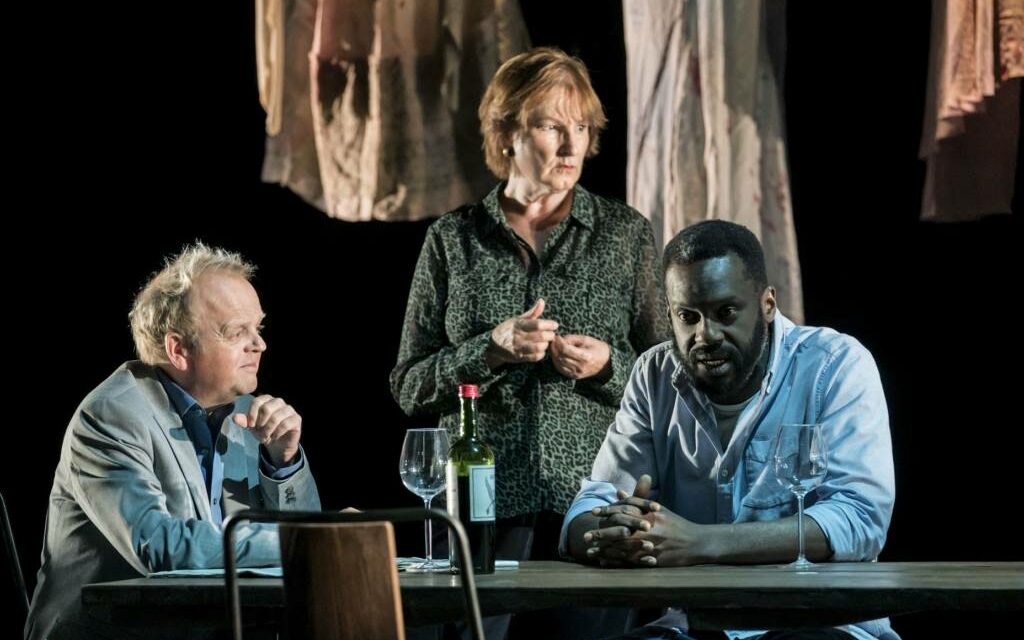 There is no denying that Cary Churchill is the greatest living British playwright. So, what you should deny instead is the naïve suggestion that her new work Glass. Kill. Bluebeard. Imp., now playing at the Royal Court, is merely a string of four short plays thrown together by virtue of their novelty. Though ranging considerably in length and tone, these four pieces cohere and build on one another in a quietly intelligent revue that meditates on violence, belief, and storytelling with an electrifying gusto. Indeed, what else could one expect from a master dramatist whose formal inventiveness has been nothing but exemplary?

Directed with intriguing precision by Churchill’s long-time collaborator James Macdonald, this quartet of surreal tales works its magic primarily through the sum of its parts. Included in that sum are not only four plays, but also two episodes of acrobatic spectacle that fill the intervals between Glass and Kill, and between Kill and Bluebeard. These awe-inspiring transitions are an invitation for us to think harder about the connective tissues among the individual plays, about the ways in which they are held together by a theatrical imagination that is characteristically unafraid to embrace its use of artifice.

Miriam Buether’s dark and darkly suggestive scenic world keeps reconfiguring itself within a picture frame lined with light bulbs. However different they may be, then, the four plays are assigned to the same plane of theatricality, unfolding within the same borders. In each, an ominously vast darkness is the backdrop to a few set pieces and props, with the actors appearing to float in this gaping space, even when they stand upright. The brilliantly elliptical quality of Churchill’s language feels very much at home in this estranged, stripped-down aesthetic. 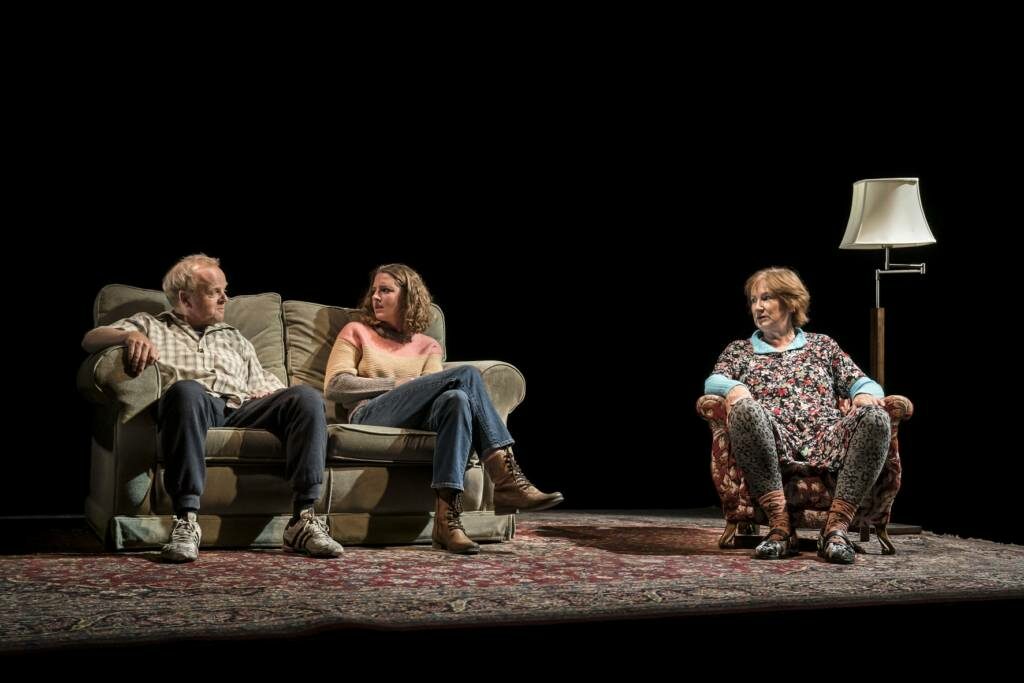 A brief look at the subject matters of these plays should reveal something of their unifying uncanniness: Glass tells the disjointed story of a girl made of glass, as she learns to love, to lose, and to shatter. In Kill, a pagan god is perched above a boy, narrating Greek myths in all their blood-drenched convolutions. Bluebeard is named after a serial killer, whose four friends try to come to terms with—and ultimately make a travesty of—his atrocious murders. In Imp, which runs to an hour, two elderly siblings attempt to pull the strings of those around them with the help of an imp that may or may not live in a bottle.

Not unlike in Churchill’s kaleidoscopic Love and Information (2012), the accretive force of these constituent parts is often more praiseworthy than their individual strengths. Death, destruction, and spite run through them in an enchantingly snaky manner, as does a marked interest in performativity. How and why does evil come about, and what do we do with it once it’s out in the world? Can you believe in something without first constructing and sharing a story about it? And what power can your speech, your stories, have over others? These questions furtively raise their heads throughout the evening, casting their sly shadows on Churchill’s quirky, gnomically eloquent characters. True to form, Churchill never attempts to drive things to a clear answer or a tight conclusion: what reigns supreme are the tantalizing evasions of her creations.

Such subtle interminglings of the everyday and the grotesque are also evident in an ensemble whose performances are remarkably refined and at times charged with Pinteresque menace. Three actors, in particular, shine the brightest: Toby Jones and Deborah Findlay are first seen as Bluebeard’s alarmingly restrained friends, and then as Imp’s two siblings whose prosaic bickering and innocuous plotting pant with repressed energy. Tom Mothersdale is a captivating storyteller in his first appearance in Kill, and when he returns in Imp as the homeless Rob, the result is a similarly affecting portrayal of suspicious affability. 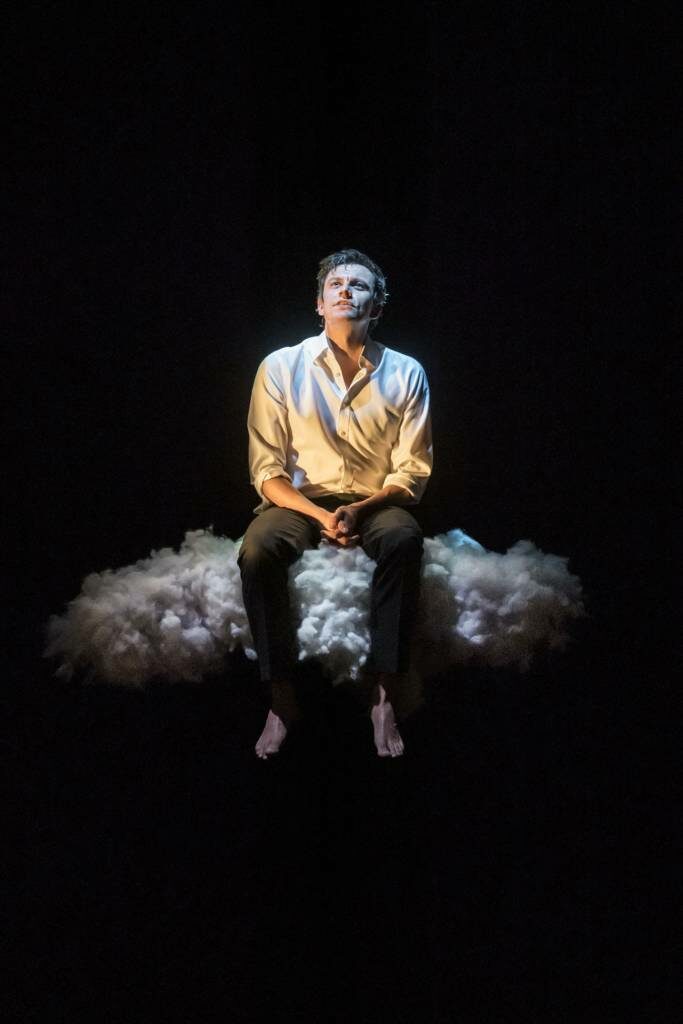 The only exception to James Macdonald’s top-notch staging is to be found in Glass, which remains unnecessarily vague throughout its 15-minute run. On the page, the play’s tender language and mutating dramaturgy are instantly recognizable, but much gets lost in Macdonald’s blurry take on this piece, which is actually as delicate as its see-through heroine. Nonetheless, this bumpy prologue is generously compensated by the remaining three plays whose executions are both brisk and positively ambiguous. If I were to pick a favorite, though, it would easily be Bluebeard, where six blood-stained dresses hover over a series of dinner conversations, haunting with a wicked charm the memories, aspirations, and relationships of the play’s four characters.

Glass. Kill. Bluebeard. Imp. will likely not find its place up among Churchill’s masterpieces, but that doesn’t change the fact that there is much food for thought in this gloriously bizarre collection. After the curtain falls for the fourth and last time, it is nearly impossible to leave the Royal Court without a whirlwind of questions and provocations playing on one’s mind. It is an enormous privilege and delight to witness Churchill keep rethinking—at age 81, and with expected diligence—what a great evening in the theatre might look like.