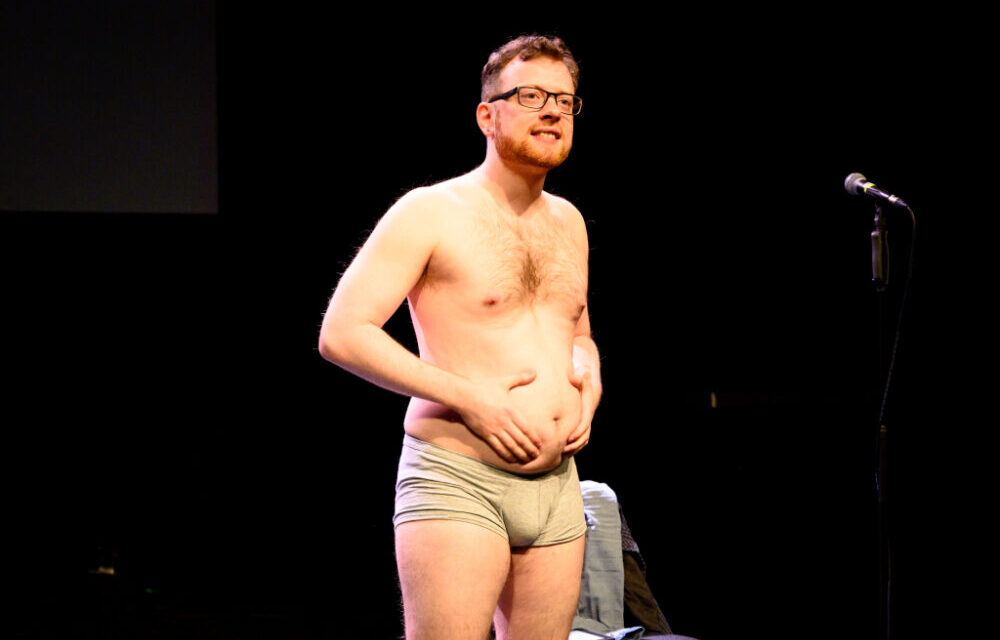 Tim Norwood describes himself as an emerging theatre-maker from Sheffield. He’s queer, disabled, and happily mining them both for material. He uses personal and confessional writing to make the skeleton of a show, and adds movement, music, comedy, and live art elements. He’s been supported and mentored by Theatre Delicatessen Sheffield, Third Angel, and Forced Entertainment, as well as supported by Sheffield Theatres.

Tim wrote and performed It’s OK to be Naked for the University of Sheffield’s Festival of the Mind 2020, in collaboration with academics and mental health professionals. The performance was streamed and is available on YouTube. His one-person show uses storytelling, gentle humour and stripping to explore our relationship with our bodies and to challenge misconceptions about body image.

Konrad: You kindly shared your production notes with me ahead of this interview. At one point, you note not to ‘skirt over’ issues of race, gender, etc. in your performance. This idiom struck me. As a non-native English speaker, I never came across it before, and it made me think about how clothed and gendered our everyday language is. The expression is built around hiding ‘shameful’ (female) body parts, used to describe avoiding uncomfortable topics. What makes nudity uncomfortable?

It seems we’ve got this deeply ingrained sex-negativity, which we possibly inherited from the Victorians – although I can’t swear by it. But it seems to be a likely place of origin for that attitude. I can’t think of a factual, solid foundation for such beliefs.

Initially, the show was going to be about how that’s an important topic. There are a plethora of subjects around this: people not understanding consent and sexual violence; people having bad sex, which is a significant concern for so many; unwanted pregnancies; STIs – there are so many problems which come about from unwillingness to talk about sex. I wanted, therefore, to examine the root of that, seeing as – for most us – it’s a relevant part of our lives.

But it’s such a broad field. When it came to the rehearsal process, I sat down with my producer, Olly Newton, and found that addressing both sex positivity and body positivity led to several challenges that kept unbalancing the performance. We, therefore, started looking at removing the sex-positivity element. Focusing purely on the body positivity aspects allowed us to arrive at a more confident production.

K: The working title for your project named it as a clowning show, and your development process involved attending ‘fooling’ and ‘clowning’ courses. Holly Stoppit, who runs the courses you attended, describes clowning as ‘dropping back into a state of child-like wonderment, where pleasure, playfulness and exploration rule’. Some, however, may associate clowning with feelings of humiliation. Is clowning something you use to counter that very feeling?

T: As I mention in the post-show talkback, some people see being naked in a situation of public speaking as their worst nightmare. That was an interesting reflection to have. Clowning is about being able to do things which feel silly – but without feeling silly about it. I would recommend to any performer, but also to all people in general, to look into clowning – and especially into Holly’s courses. They’re very healing and good for the soul. But it’s about being able to discard the embarrassment of being watched and doing something you’re not sure people will accept.

Picture a situation of a two-year-old child running around, being completely naked, and an adult trying to catch them – but the child remains completely care-free. They’ll carry on running around like that, as that’s what they enjoy doing. So it’s about tapping into that spirit, and I think it’s the way the show ended up approaching nudity after dropping the previously discussed sexual element. I would like for people to feel about their bodies the way I do when I’m clowning around naked on stage; that it’s not this big, serious thing. Maybe we can laugh at our bodies. Perhaps we can laugh about how silly we get in our approach to nakedness. I think it may be a path to having a better relationship with your body – by not taking it so seriously.

We have a lot of influences today which drive us towards wanting a body that’s a particular shape, seeing it as this project. It encourages a very antagonistic relationship with it; like it’s a piece of clay that needs to be moulded. Like it’s something that needs to be punished in order to make it do what you want it to do. And if we can think back to what it’s like to be a little kid, who doesn’t know that bodies are supposed to measure up to outside gazes, maybe we can stop caring quite so much and end up a bit happier. Taking people’s judgements of you in earnest can foster unhappiness, in my limited experience.

I understand that people do feel shame and humiliation about their bodies. It’s not to say that ‘you should just forget about that, it’s fine, just enjoy your body.’ People have a lot of history with their bodies. People internalise a lot of the shame and humiliation that others put on them. It’s good to have the possibility there to know that you can work towards feeling better – and connecting better with your body. And even if you don’t end up loving it – if you have a body that makes things difficult… Certain physical disabilities make it very hard for people to love their body… But when it comes to more superficial things, like how much you weigh, it may be possible in that sphere at least to move towards a better relationship.

I’ve heard some critiques of body positivity, which are quite valid. It can make you feel that you have to measure up to feeling positive about yourself. You need to adore your body completely, and if you don’t – you’re inferior, which is a toxic positivity. That’s not much better than having a negative relationship with yourself; which is why we needn’t take things too seriously. It can help to replace the negative stuff one internalised. But at the end of the day, it’s your body and however you feel about it is your business. 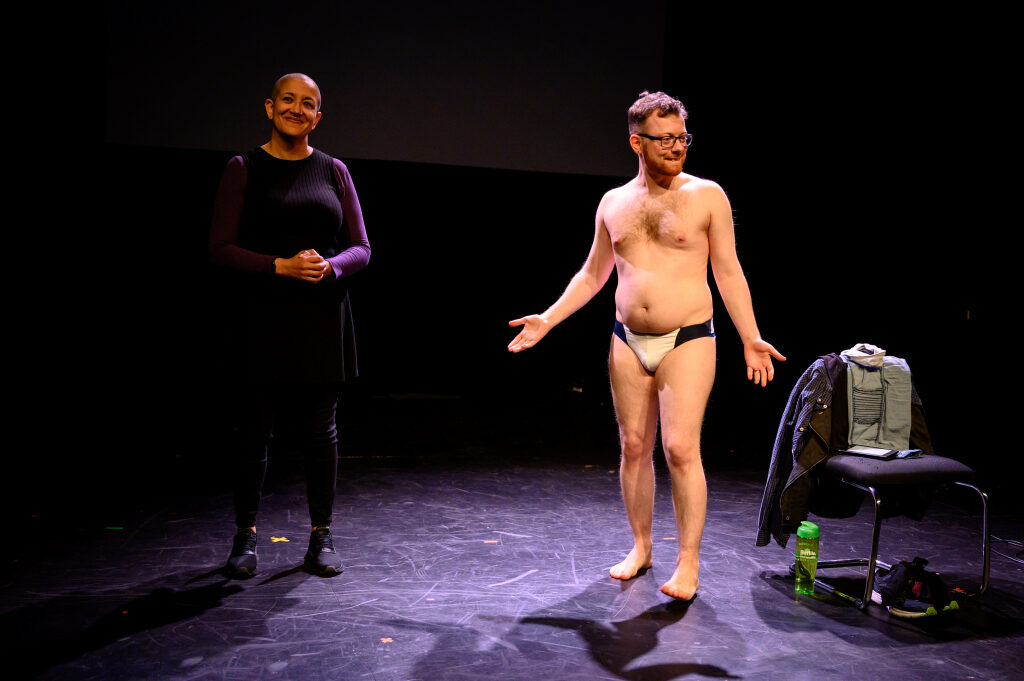 K: It’s interesting to think about this approach of child-like innocence in the context of a performance which, ultimately, frames its content as ‘adult’. You preface the performance with trigger warnings in saying not to watch it if one finds the sight of a nude body, a penis – be it soft or erect – offensive. There’s an obvious legal/procedural necessity for inserting those warnings. Beyond fulfilling those requirements, do you find this labelling helpful?

T: In an ideal world, I wouldn’t have to tag the production as ‘mature content’ and warn people that they should leave or stop watching if they’re going to be offended. In an ideal world, I guess we wouldn’t care if under 18s are seeing a naked body in a non-sexual context. I remember hearing about sex education in one of the Scandinavian countries in which classes take a very matter-of-fact approach to the body and display and explain intimate body parts. I would like to be able not to bow down to that binary, unfortunately, there are ramifications for not labelling your penis as sensitive or offensive material.

K: As your performance progresses, you carry on removing layers of your clothing. Stripping gradually builds up suspense. When you finally remove the last item – a jockstrap – it’s staged as a dramatic reveal. How dramatic of a reveal is it for you as you perform this? Do you feel this framing may perhaps reinforce conceptions of nudity as taboo?

T: Personally, as I perform this segment, the act of stripping doesn’t weigh on me. I agree that the dramaturgy of this moment ascribes it significance. Still, I also needed to find a balance between the politics of the show, the showmanship and the spectacle. It’s what makes it fun. For a moment, we can lower the politics down on the priority list and entertain through the spectacle. It’s an interesting line to negotiate. There will always be moments where you could have gone one way or the other.

K: As you mention the spectacle – one of your body – viewers can engage with it in multiple ways, voyeurism being one of them. How do you counter that gaze?

I’m presenting my body in an as uncharged way as I can, which works towards the politics of the show. If people still find that thrilling, that isn’t something that bothers me a huge amount. In terms of artistic presentation, I’ve done the work to present myself non-sexually to the extent that is reasonable. I could probably go even further with that in some way, but it would make it feel less authentic to me. If I were to give a more flippant response, I’m a bit of an exhibitionist anyway; which you might guess from the fact that I’ve done this performance. I mention pornography in the show, and if people engage with it on the same level, that’s not a problem for me. Get what you want out of it. On a more cynical note, if a naked man in this show gets more people to look at it, that can’t be a bad thing.

K: It’s probably a fair way to look at it. I still believe that, even if this is the element that will catch people’s interest, and they engage with your performance with a particular intention, it may not necessarily give them what they wanted. Instead, they may be able to find something they’ve not expected. It’s worth noting your performance is an effect of a collaborative process. One of the people you worked with is Dr Nicola Buckland – a researcher with the University of Sheffield’s Department of Psychology, specialising in questions of eating behaviour and weight management. Could you say a bit more about her involvement, and how did it change the show?

T: In practical terms, we had a discussion/workshop with Nicola and counsellor Claire Wood. I wanted to get an informed opinion of what eating disorders are like and to dispel myths around them. My work usually tends to be about trauma and mental illness, but I’ve not had an eating disorder. I certainly had a very negative body image when I was younger. I wanted to make something that’s a positive contribution to the media around these topics. I sought the expertise of Nicola and Claire to make these areas of my performance more credible.

On a more granular level, there’s a part in the production with a man I told stories about; somebody shouts something at him from a car, and he ends up binge eating that night. That’s inspired by one of the case studies that Nicola told us about. It’s a good example of how the kind of things that people say casually can impact somebody’s attempts to be healthy.

I always struggle a bit when people talk about having lost weight. I know for a lot of people losing weight is an achievement that they want to celebrate. So I always say something like ‘I’m happy that you managed to do this thing that you’re trying to do’ – although I don’t phrase it like that. But I never wish to celebrate the fact that they’ve become thinner because we moralise thinness and fatness. It’s just destructive. The moral dimension of fitness and fatness and food is a real pet peeve of mine – can’t food just be food? 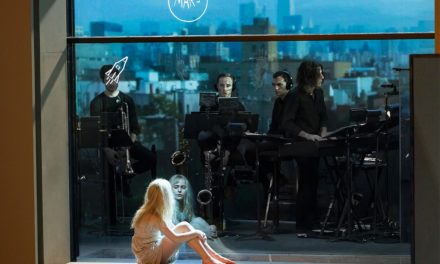 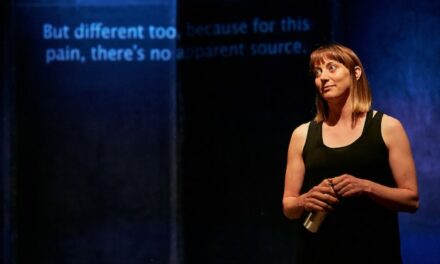