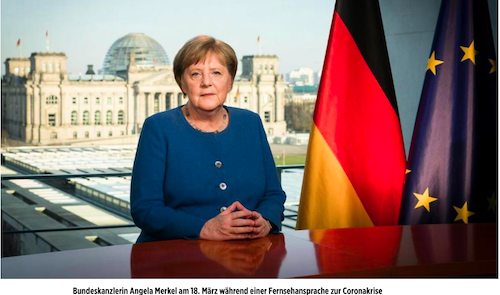 In times of crisis, we see just how closely reality and fiction really are. What seemed like a world dominated by a single scenario of endless growth and movement, turns out to be capable of drastic change from one day to the next. Lara Staal analyzes the COVID-19 crisis and gives words to the script that is unfolding around us.

How can a column supposedly about theatre performance, or in the words of Etcetera, ’aesthetic experience’, function in a world without performances? Not only a world without performances but without human gatherings, full stop? Without an audience, without stands, without theatres? Without cafés, restaurants, museums, gymnasiums, and clubs? Without international traveling? Without physical intimacy except for partners, children, and perhaps very close friends?

Is this a world defined by isolation, absence, and withdrawal? Impossible, as a whole, to describe or to capture in images, because life largely takes place outside the public realm within domestic mise-en-scènes hidden behind closed doors and curtains?

Or, on the contrary, should we perceive the current state of things as one sizeable choreography? As a series of images, we already knew from dystopian science fiction films, in which people are threatened by all kinds of epidemics and pandemics? A 24/7 performance by world leaders who speak to their people from behind their art directed, empty desks and compare the current crisis to a war? A battle between narratives fighting for their right for approval?

Comparisons with theatre, performance, film, and fiction have followed each other rapidly in describing the current state of the world. Naomi Klein’s reaction to the corona crisis was headlined: ‘We know this script’, although she notes that ‘the end of this story has not yet been written’. A thorough article by The Guardian entitled ‘We can’t go back to normal’ closes with the words: ‘We’re not watching a movie: we’re writing one, together, till the end’.

Only in crisis do we seem to see how closely reality and fiction are connected. What seemed like a world dominated by a single scenario of endless growth and movement, turns out to be capable of drastic change from one day to the next.

Recently I moved to a small village, 30 kilometers North of Amsterdam. Outside my window, everything appears as usual; the sheep, farms, and trees (although recently in bloom) behaving just as they did before the crisis. At the same time, nothing is the same anymore because the narrative has changed radically. An invisible reality – viruses are many times smaller than other microorganisms – has been expressed through language and images and we have all subscribed to the same script.

The story that we collectively endorse, which would almost make us think we’re all in the same boat, is this: there is a pandemic, anyone can be infected, so we must stay inside to minimize the chance of infecting others. But a crisis like this rarely stands alone and forces us to ask questions about the world as it was until recently. The word ‘crisis’ originates etymologically (as we theatre experts know better than anyone else) from the Greek ‘krísis’, meaning ‘distinction’ or ‘decision’. In the Aristotelian model, crisis precedes the climax and refers to the moment when chaos is at its greatest and the protagonist has to make a decision. Crises shape history. And moments of shock, according to Naomi Klein, are volatile: ‘We either lose a whole lot of ground, get fleeced by elites, and pay the price for decades, or we win progressive victories that seemed impossible just a few weeks earlier’. A crisis forces us to make a distinction and come to a decision that will ultimately determine the ‘climax’ and ‘catastrophe’, to remain in theatre terminology.

Several voices emphasize the intertwined nature of the corona crisis and the climate crisis. Pandemics are a logical consequence of the continuous movement of people and goods and the proximity between (wild) animals and people becoming smaller. Increasingly restricting the living spaces of animals for the benefit of humans is directly related to the ecological extermination of our planet that we have been steadily heading towards since the industrial revolution. Both the coronavirus and the climate crisis require a radically different way of life and can only be achieved through international cooperation. Both are also the result of global capitalism, for which scientists have been warning us for years but we have been unwilling to listen to, let alone act.

The much-shared article by Yuval Noah Harari (‘The world after coronavirus’) also emphasizes the idea of making distinctions and decisions: ‘Humanity needs to make a choice. Will we travel down the route of disunity, or will we adopt the path of global solidarity?’ We are beginning to understand that we will not return to ‘business as usual’ and that ‘going back to normal’ is exactly the problem. But the battle over who will be the final director of this world stage is far from settled.

Does this script lead to a totalitarian surveillance society? (A few days ago the Dutch newspaper NRC published an article about British researchers who claimed that the fastest way to contain the virus would be via a tracking app on our smartphones. Something that is already implemented in China and South Korea.) Or are we discovering that a call for solidarity and addressing people’s responsibility is more effective in ensuring people can make decisions that benefit the greater good? In this respect, the Netherlands scored rather badly, recently during the Prime Ministers speech he made a feeble appeal in saying: ‘watch out for each other’. For that matter, The Netherlands was not only a disappointment in terms of language. Both the rejection of the ‘coronabonds’, an EU-wide support package for the countries most affected by the virus, and the way in which the Netherlands never misses an opportunity to confront southern countries with their ‘messy’ government finances is truly shameful. Outrageous for a country that still acts as a tax haven for many multinationals and at the same time hopes to get support from other countries for the lack of intensive care beds…

In addition to the question of enforcing behavior or addressing the responsibility of citizens, there is another important dilemma: Are we dealing with a scenario that, after an era of an intense international movement of goods and people, irreversibly moves towards closed nation-states and local isolation? Or does COVID-19 finally teach us what global solidarity looks like?

It’s not as if scenarios for a fairer, more just society aren’t already available to us. Equal access to health care, an economy based on fair distribution instead of profit, other (slow) ways of traveling, growing, and consuming … The wealth of ideas are there for the taking. Initiatives such as The New Green Deal, Extinction Rebellion, Black Lives Matter, Occupy; they all come to the same conclusion. Although we might have the tendency to think this is the time for radical empathy because we are all in the same boat, nothing could be further from the truth. For some these times might be experienced as moments of welcome contemplation and renewed contact with family members, for others, it can mean sleepless nights because of financial insecurity, or worse; fighting for your life without shelter and falling victim to a racist agenda.

Once again, refugees are the biggest victims; after fleeing conflict, climate change, or scarcity, they arrive – after a traumatic journey – in EU states that label them not only as fortune seekers but also regard them as immediate threats to the health of their citizens… How can we not see the evidence of a returned form of fascism when we look at the way we are abandoning people to their fate in Moria and observe European Commission President Von der Leyen thanking Greece for being the shield for Europe.

SPEAK WITH ONE VOICE

This world stage knows many players and directors. It is impossible to predict which script will eventually be put in play, but what is certain is that the coronavirus crisis is a decisive moment. The big question is how we, people, citizens, but also theatre-makers and artists, can contribute to the final narrative written into history. How can we get our interpretations of this crisis and possible solutions into the spotlight?

Not an easy task in times of social distance. Because who are we as theatre makers without assembling? Yet this is not the time to be nostalgic for the lack of live contact. If creativity is one of the qualities we attribute to ourselves, we must be able to find answers for how we can still continue to work towards a better world in these current circumstances.

A disaster disrupts normality and makes it possible to perceive alternative worlds. Right now, people are receptive to different scenarios to the one we have been following. Let us all, no matter how big or small, try to give words to these times and collectively describe this live performance of reality. Because whatever the cost, we need to avoid a scenario of an isolated and inward-looking society that systematically sees people from outside its bubble as its enemies, spies on its own citizens, lets the market prevail over public health, and refuses to take care of vulnerable people.

It is not about what we, despite the crisis, can still achieve individually from our living rooms. The political lies in what we can do collectively. Even in times of social distancing, it must be possible to act as a greater whole. This can consist of balcony performances, shopping for others, or arranging shelter for the homeless, but it can also mean giving words to this crisis; in order to unify our interpretation.

Let’s face it: what we have been referring to as ‘normal’, ‘reality’, or ‘daily life’ is often the outcome of fiction written in the past. People like Ronald Reagan, Margaret Thatcher, and Ayn Rand were the scriptwriters of the ’60s, ’70s, and ’80s. And who are those today? The book, ‘Parable of the Talents’ written in 1998 by Octavia Butler shows how artists can play a visionary role, as the novel describes a fanatic president using the slogan ‘Make America great again’…

Once people decide to collectively act upon a new scenario it can quickly become the new normal, so much so that we forget it was once a fiction or imaginary scenario. We as artists can generate scripts but instead of singularly controlling the process and outcome of the performance, democracy demands a co-directing approach. We storytellers cannot do much more than materialize our analysis and visions produced from these times; showing and making tangible that this crisis has the potential to transform our world into a better one – in the hope that these visions will leave traces and stick to as much as possible…

We can only make the shift from ‘I’ to ‘We’, together. It is precisely now that we alter our individual voices in order to speak as a collective voice: ‘we demand that the future reflects international solidarity & ecological recovery, prioritize education, health care, and public services and provides social safety nets for those in need’. Nothing more and nothing less. Now let us continue to repeat this until this collective story has become a reality.

This article was originally posted at E-tcetera.be on April 14, 2020, and has been reposted with permission. To read the original article, click here. 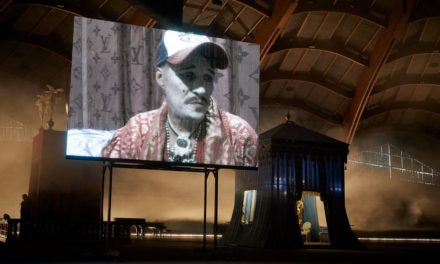