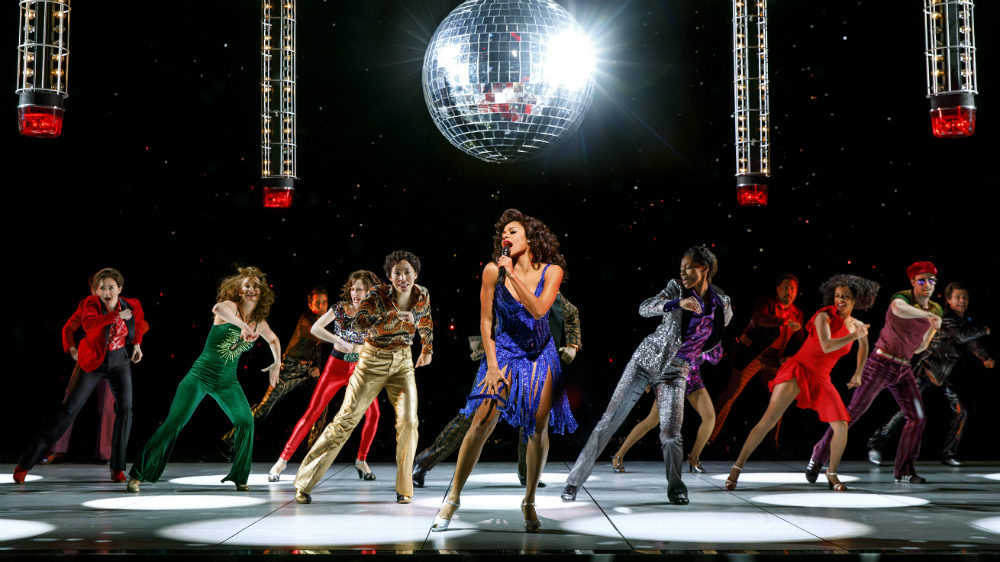 As we’ve settled into the 21st century, pop-culture vestiges of the 20th century have fallen by the wayside. Bell bottoms, platform shoes, and the ever-casual widespread use of cocaine followed disco into the place where all the things we’d like to forget go. It’s interesting, then, that one would choose disco as a genre and subject matter for a new Broadway musical. But, like most things we’d like to forget, there exists an opportunity to correct, clarify, and contextualize what we know in a way that brings new meaning. Summer: The Donna Summer Musical does just that, while delivering disco hits that stand the test of time as a cornerstone of the genre.

It’s easy to see Donna Summer’s enduring impact on some of today’s most successful and popular artists, and this musical doesn’t shy away from the Ida Corr/ Beyoncé/Janelle Monaé–esque visual spectacular that Donna originated. The show is flat-out exciting, with performances so strong that I often found myself holding my breath waiting for cadence in the delightfully indulgent visual and musical experience. LaChanze gives a performance so strong that at some point her very presence becomes a verb–an accomplishment in performance we’d all like to see. To an audience that may or may not know who Donna Summer is, LaChanze IS Donna Summer, and completely up to the task of immortalizing an icon while reminding us why she is a regular at the Tony nominee table. There are also remarkable performances by Ariana Debose (Disco Donna) and Storm Lever (Duckling Donna/Mimi), who share the weight in storytelling and repeatedly deliver show-stopping moments that meet exactly the bar set by LaChanze.

On the heels of an active movement pushing the American Theatre Wing to add in a Tony award for outstanding ensemble, this production is a perfect advocate for the addition. The ensemble of Summer, predominantly women, has the almost Olympian task of singing, dancing, and acting to a disco score, with more costume changes than one could count, and every moment of movement expertly choreographed by Sergio Trujillo.

With direction from Des McAnuff, the ensemble’s greatest accomplishment is to guide us through the rather expansive expositional work to get to a place where the rest of the drama can stand on its own two feet. As with any predictable biopic story, the musical does its strongest theatrical work in moments of strict dialogue; however, in a brilliant finesse on the part of the book writers, numbers like White Boys and I Remember Yesterday shine in biographical and expositional efficiency as we bounce from moment to moment.

In the hierarchy of commercial priority, Summer hits its first mark (to be entertaining) with clarity and razor-sharp precision. However, for the New York theatre elite (those who insist on every piece of theatre being both entertaining and intellectually stimulating), it may not be immediately attractive as a literary work. Rest assured, this new jukebox musical is not without its own literary merit. It simmers and burns as we discover what it means to be the defining artist of a doomed genre, coupled with the impending implosion of a movement that was in decline before it was on the rise.

Donna Summer, the ever-reigning queen and unfortunate victim of disco, elevates the genre, making its canon impossible to forget and laying the groundwork for pop music to thrive. The work goes to great lengths to advocate for Donna’s contribution to music and the validity of the genre. God couldn’t save the queen of disco, but the queen saved disco from musical obscurity. That alone is a story worth telling. Welcome to Broadway, Donna Summer.