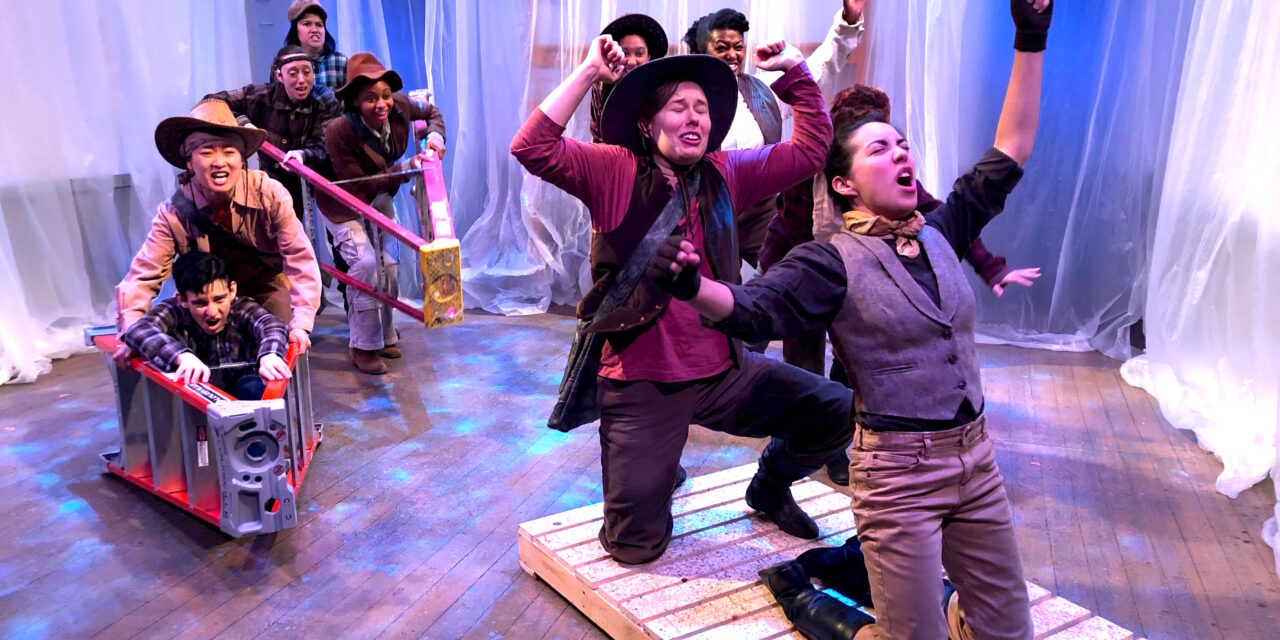 Son of Semele Ensemble brings Jaclyn Backhaus’ Men on Boats to Los Angeles audiences with a highly physical production that elicits the terrors and dangers of exploration in a uniquely simple way.  Largely based on John Wesley Powell’s journals of his 1869 expedition over the Colorado River and its canyons (including its most famous one in Arizona), the script tells the story of the cisgender white males while specifying that racially diverse, female, trans, genderfluid and non-binary actors must take on the roles.  In this production, the cast of female and non-binary actors own the story with a clarity of purpose that makes any thought of gender disappear immediately.  It helps that we are launched into the fray at the start as the four boats they begin their journey with face rushing rapids and each actor steps forward to introduce themselves.

Under the direction of Son of Semele Ensemble company member Barbara Kallir, the relentless pace of the river never lets up and its ability to turn on these men who are there to map it out for the US Government is inventively illustrated via the use of plastic sheeting that hangs on the walls, ready to be pulled into action, to cover an actor who has fallen off a boat and illustrate what it might look and feel like to drown in the fury of that water.  The clear plastic even takes on the sound of roaring rapids as the actors shape it to the story’s needs.  Essentially, the men who faced this unknown country and tried to tame it with their sextants, rifles, and stores of bacon, flour, and whiskey had to be brave and crazy to do what they did, however it seems this expedition suffered from a lack of forward-thinking and a failure to plan ways to get supplies out to them along the way… something that definitely creates conflict between the men and nearly does the group in. 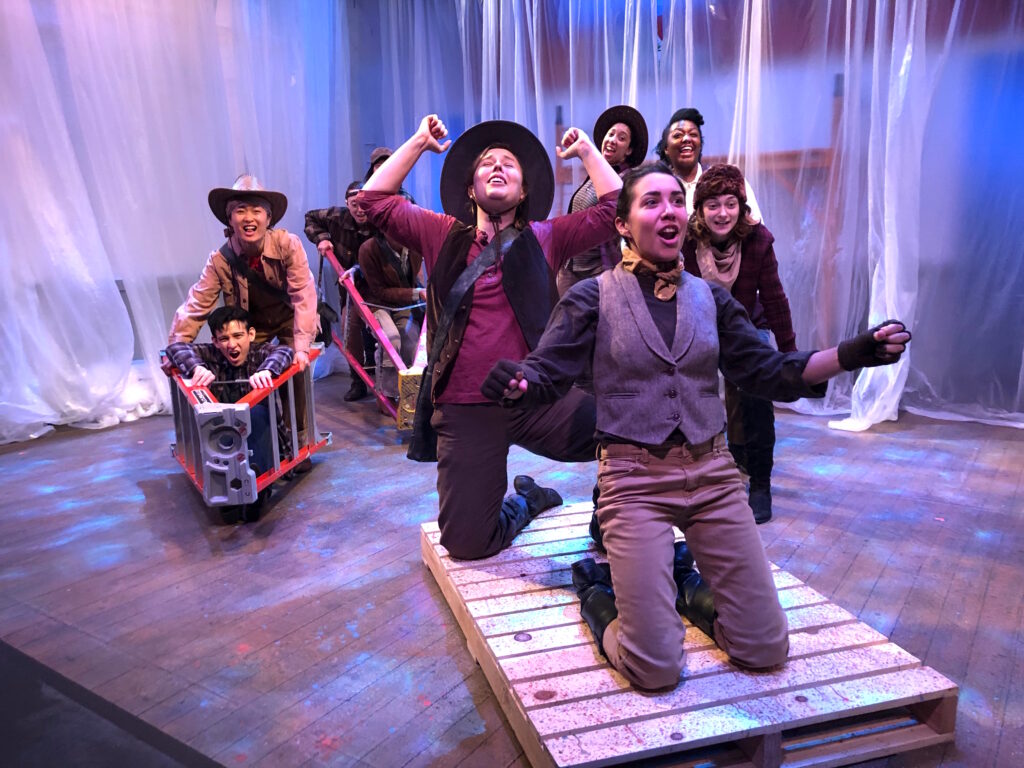 Melissa Coleman-Reed plays John Wesley Powell, the authoritative, determined leader of the group who has been sent on this mission by none other than President Ulysses S. Grant himself.  Powell lost most of his right arm during the Civil War (at the Battle of Shiloh) and Coleman-Reed illustrates this by keeping her lower arm folded against her upper, complete with a knot in her sleeve where her forearm would be.   Jinny Ryann is William Dunn, Powell’s boat-mate and the only member of the group with the strength to question their leader when things go wrong.  They seem to be close, Dunn and Powell, and their relationship offer us the clearest indication of how the pressures of daily life on the river start to unravel even the tightest knots.  The third man on their boat is John Colton Sumner played by Tiana Randall-Quant and Sumner acts as a kind of intermediary between the two until things break down near the end.

All the men on this river are seasoned soldiers, hunters or explorers save for George Young Bradley, played by Cindy Lin and Frank Goodman, played by Taylor Hawthorne (who also has the role of Mr. Asa, but he comes later).  Bradley is on his first-ever expedition, is eager to a fault, and wide-eyed and hopeful in all the ways innocence can ever be while Goodman is an extremely British traveler whose fascination with the West that has “harboured some of [his] life’s most vibrant experiences” wears as thin as his personality does on his fellow explorers.  Bradley is paired up on one boat with Shady, Major Powell’s older brother, played by Elspeth Weingarten with a stoic world-weariness that adds so much to the play.  Shady favors us with a few songs on the ukulele, which are as much of a respite and entertaining to listen to as such musical interludes must have been for the men on that river in their time.

Goodman is paired up with Oramel ‘O.G.’ Howland played by Shelby Corley (who also has the role of Tsauwiat, Ute Chief) and his younger brother Seneca Howland played by Ashley Steed.  The Howland brothers come the closest to being the bad seeds in this group, stealing tobacco and having the poorest disposition about events as they unfold and Corley and Steed seem to revel in the opportunity to lean into that.  Liz Lanier plays the cook, William Robert Hawkins who mans the ‘party boat’ Maid of the Canyon with Thea Rodgers who plays cartographer Andrew Hall (and also The Bishop, Tsauwiat’s Wife).  The character work is specific across the board and it isn’t hard to align yourself with one or several of these historical figures. 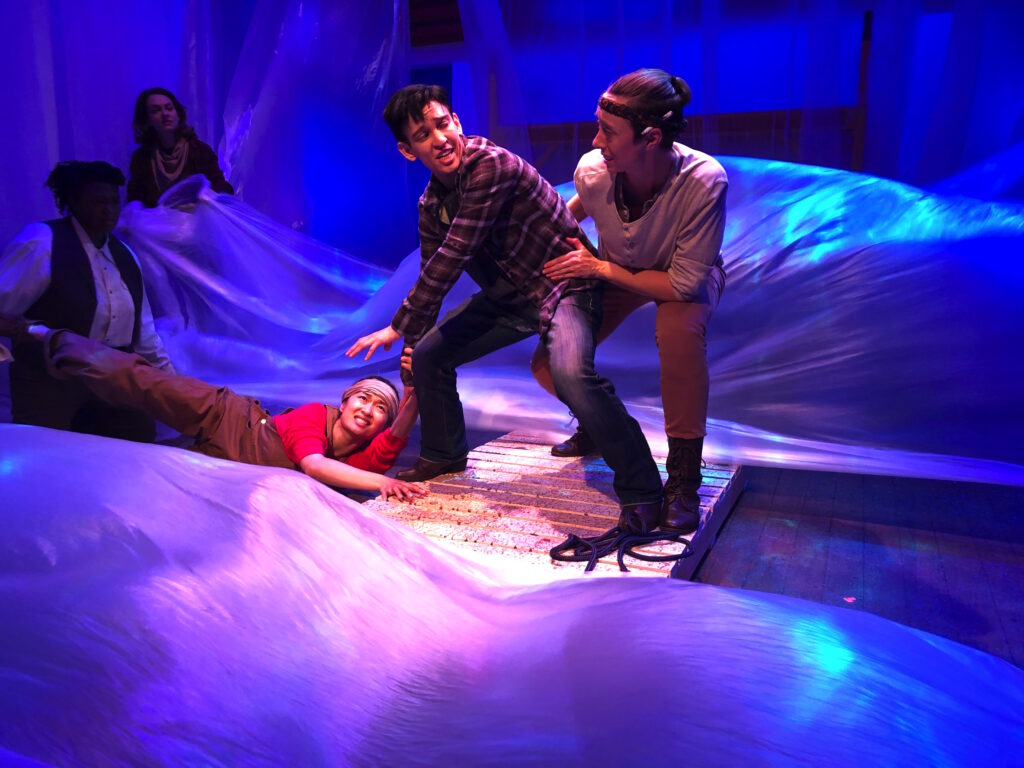 The play doesn’t only focus on the perils of their quest, there are many funny moments. Dunn doesn’t just want to succeed in getting to their destination, he also wants to name something after himself.  Powell lets him name a cliff.  When Dunn wonders whether he’ll be allowed to come back and live there, they consider what danger Natives might pose, noting they have lived there for centuries.  “Well,” Powell continues, “they’ve also probably named all this land already.  And here we are naming it for ourselves.”  The Set design by Carlo Maghirang includes an image of John Wesley Powell in a painting set above the actors’ heads that illustrates the desert canyons in a science-museum-diorama kind of way.  The boats are illustrated via the clever use of ladders and scaffold, as if in a nod to the construction work the men were doing as they explored and reconfigured the story of America. Lighting design by Allen Clark and the Sound design by David Marling meld perfectly together with the set to immerse us in this abstract world.  Wyndell C. Carmichael’s Costume design brings the character’s personality to life.

There are a couple of striking moments in the text that stand out.  The first occurs when Sumner, Goodman, and Powell climb up to ask Tsauwiat and his wife for food and for help in getting Goodman off safely to the nearest Mormon settlement.   Tsauwiat and The Bishop offer Powell all the help he needs with a laissez-faire attitude bordering on disdain as they ask whether all they are offering is “enough for you?”.  It’s a lovely scene that touches on complex questions regarding our relationship with the people who lived in this country first.   The second comes near the end when Mr. Asa meets Powell and his remaining men (Dunn and the Howland brothers gave up on the river and opted to hike out of the Grand Canyon – history notes that didn’t end well for them) after they’ve made it out of the in one piece.  Mr. Asa possesses the same knowledge that we might and therefore knows how things end for the glory-seeking Powell and his less fortunate men.  He tells Powell not to worry about Dunn and the Howlands.  “It won’t matter”, he says “, that the bulk of your crew will end up poor, drifting in the desert, dying in taverns, traversing less exciting things.  Don’t you worry about that. Because men will name places after you!  A forest, perhaps!  Or a man-made lake!”  Mr. Asa takes possession of the story, just as Powell and his men tried to take possession of America, and neither is immutable, after all.

The movement is created by Caribay Franke with music by Ben Kutner. Dramaturgy by Flor San Roman.  The production stage manager is Edward Khris Fernandez, assisted by Jimin Kang. 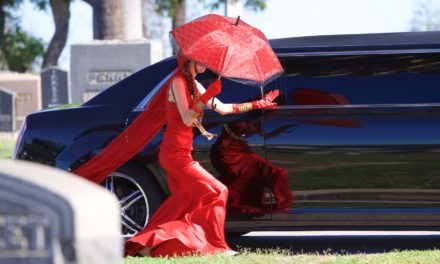 The “Masking” of Immigrant New Zealanders