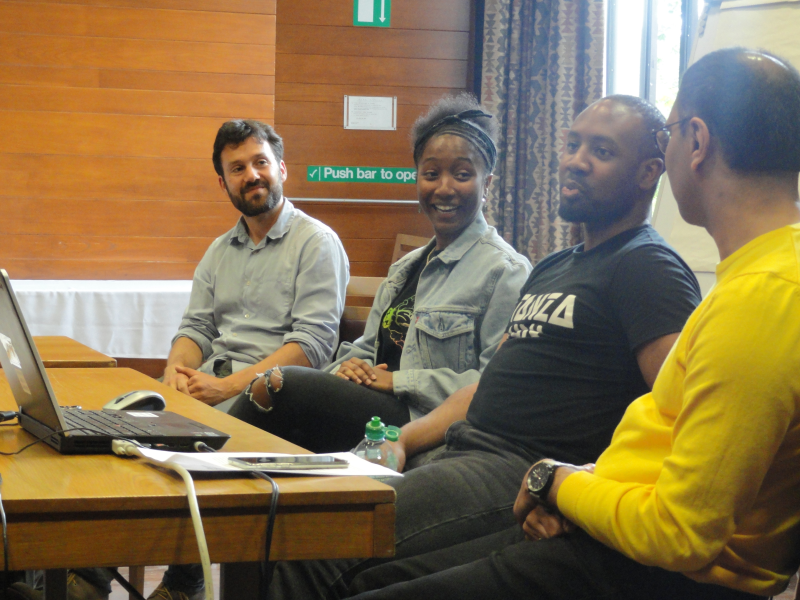 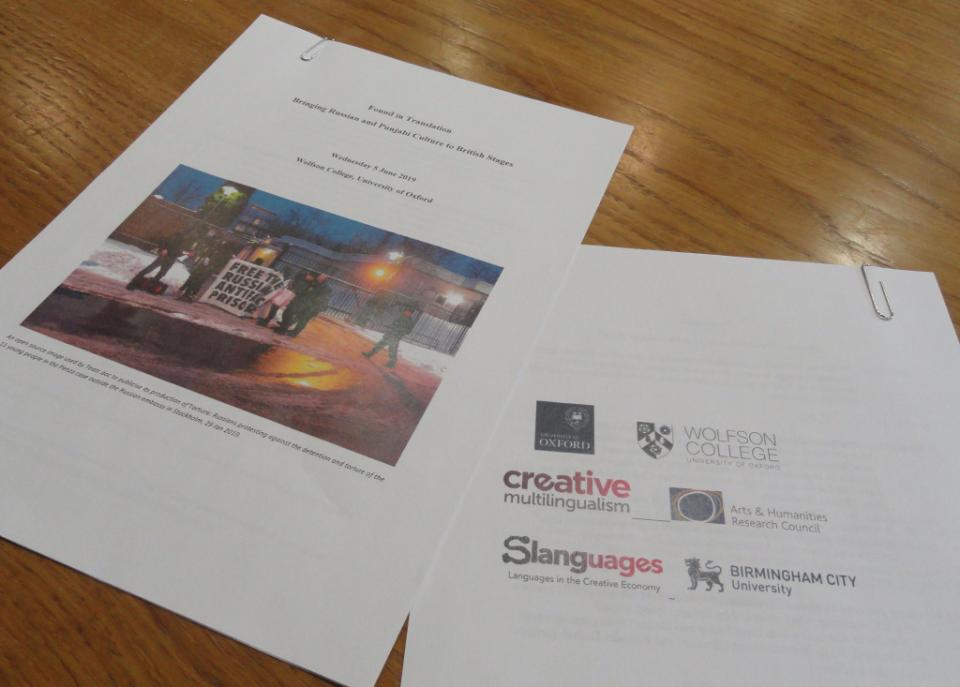 By engaging with literature from around the world in innovative, relevant and unexpected ways, Poetry in Motion showcased artistic proficiency and cultural splendor through captivating performances from hip-hop artists and lyricists Lady Sanity and Stanza Divan and spoken-word poet Rupinder Kaur.

Headed by Professor Rajinder Dudrah from Birmingham City University, Slanguages is one of several projects that offer artists and researchers a unique opportunity to study narratives and themes mutually relevant to them. Important topics like Grenfell, men’s mental health, class, identity, and race were all topics of debate at Wolfson College.

Dr. Noah Birksted-Breen and Professor Rajinder Dudrah worked with artists Lady Sanity (Birmingham) and Stanza Divan (Leicester) to produce a vibrant hip-hop theatre version of the Russian play Oxygen, written by Ivan Vyrypaev and translated by Sasha Dugdale. The research on their project can be placed in response to globalization and the increased use of the English language almost everywhere in the world, including the way we communicate (in English) on social media – something you never really think about until engaging with Slanguages. 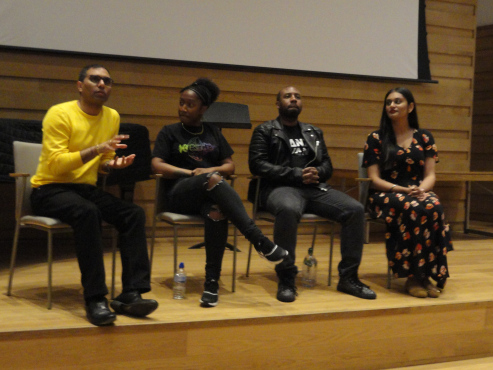 Slanguages has been creating opportunities for people with talent from diverse backgrounds, including black and minority ethnic (BME) artists as well as through their work with an urban sign language specialist, Rinkoo Barpaga (Birmingham). These are groups that are often overlooked and under-represented by the creative industries.

For instance, just last year a report funded by Arts Council England (ACE) found that only 1% of the main characters in children’s books published in the UK have BME representation and of the 9,115 titles published in 2018, only 4% featured BME characters (Flood, Guardian, 2018).

Just 4% of the staff at Major Partner Museums (MPMs) and 11% of the staff at National Portfolio Organisations (NPOs) are from a BME background, compared to 16% of the working-age population in the UK. There is a problem with representation and this is another reason why Slanguages is an important and crucial piece of research.

At a time when institutional racism in British universities is being researched and challenged by academics like Professor Kalwant Bhopal from the University of Birmingham and Katy Sian from York University – both of whom have published books about racial inequality in higher education – there is a real sense of celebration in seeing two British Black artists and a British Asian artist from inner-city Birmingham respectively performing and debating in open and having frank discussions about class and race. This is progression and is possible because the project is headed by an academic of color together with white allies and co-researchers who are conscious of the issues raised above.

So, you can see why Slanguages is a praise-worthy and much-needed project.

The day started with discussions about Russian language, a translation workshop on the Russian play Torture by the Moscow-based theatre Teatre.doc followed by conversations about how this Russian play successfully traveled to be performed at the Royal Court Theatre in London this year for British, and largely English-speaking audiences.

This was followed by one of the many enjoyable parts of the day: a debate about the brilliant reworking of Ivan Vyrypaev’s dynamic play Oxygen by British hip-hop artists Lady Sanity and Stanza Divan. The performance was directed by Noah Birkstead-Breen and curated by Professor Rajinder Dudrah. The conversations around this play were socially relevant creating an engaging debate. 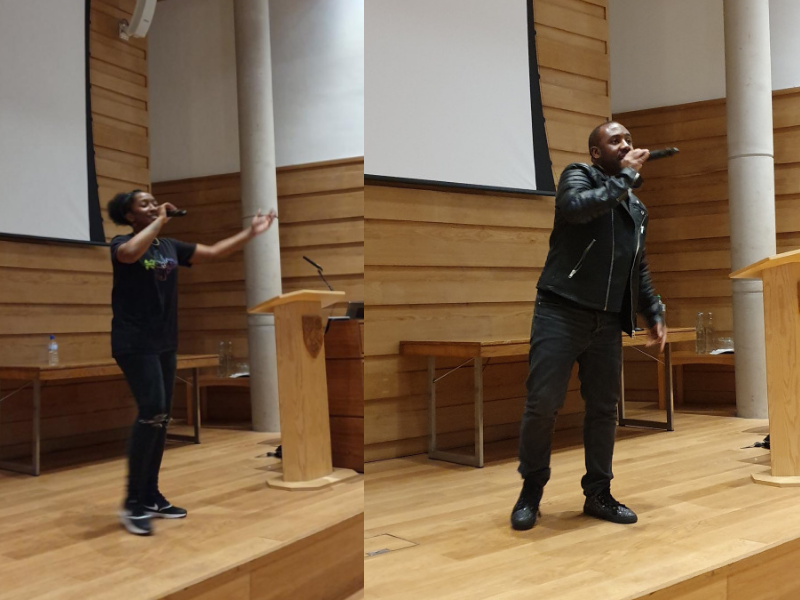 Both artists talked about their journey into hip-hop, their exploration of self as Black British artists and their time as students at De Montfort University where the two friends first met. Lady Sanity and Stanza in conversation with Professor Dudrah described how aspects of their life experiences were interwoven into their storytelling and re-working of Oxygen. By using what Stanza describes as ‘conscious hip-hop’ the two tackle the text of the play by telling their important stories whilst also exploring the oxygen, or its lack of, in relation to issues of class, capital, and race. This was excellent.

The Grenfell fire and Stormzy’s powerful performance at the Brit Awards in 2018 in response to it also featured in the discussion, and the room filled with a silent contemplation of the many lives lost on that horrific night.

“Yo, Theresa May where’s the money for Grenfell? What you thought we forgot about Grenfell?! You Criminals!”

Rupinder Kaur is a spoken word artist with a twist. When I was first approached by the Slanguages team I immediately thought of Rupinder as a potential artist for Poetry in Motion and suggested she be considered. Although I had only ever read Rupinder’s work and met her briefly before, at various events, her passion for the arts always came through. Rupinder is also an avid reader and researcher of South Asian poetry, history, and partition. Many of her poems explore these interests and as a performer, she makes for a confident and vibrant speaker. On stage, she really does come to life.

Rupinder uses her British Asian heritage as inspiration for her writing style, merging both English and the Punjabi language, and sometimes Hindi and Urdu, creating multilingual pieces. As Rupinder read from her debut poetry book Rooh (Soul/Spirit), the focus from the diverse audience of people from different age groups, ethnicities and cultural backgrounds was a pleasure to witness. This is real testimony to the way that languages can bring people together through music, poetry and other art forms. 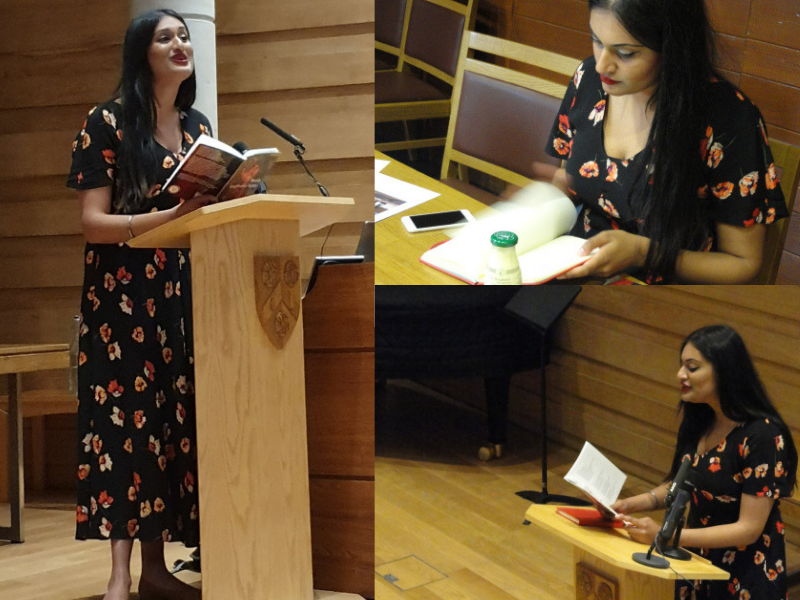 There is a mysticism in the way Rupinder recites poetry. Her merging of at least two cultures and two languages danced around us all, as the rhythm of her sound gradually pulls you in. The poem (below) was a particular favorite of many in the audience and specifically that of artist Stanza Divan who praised it during the Q&A. 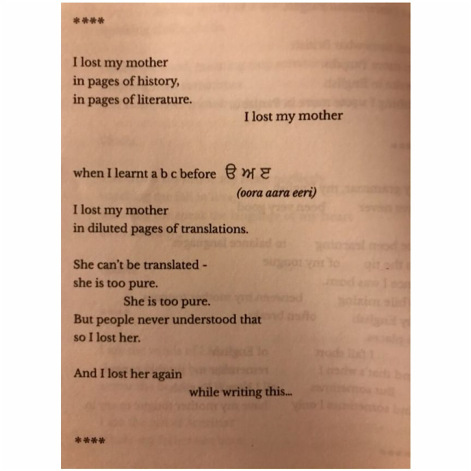 What really strikes me about the day’s events were the skilled and provocative performances delivered by all three artists and the way space was created for a lively discussion about cultures and languages being fused together. I walked away feeling inspired to explore the ways that I myself can use my own multilingual and multicultural heritage as a writer, blogger, and filmmaker. I felt further inspired by the work and spaces created by the Slanguages project. I look forward to engaging with Slanguages and Creative Multilingualism some more, as their research continues to develop.

This article was originally posted at RaveetaWrites on July 1, 2019, and has been reposted with permission. To read the original article, click here.