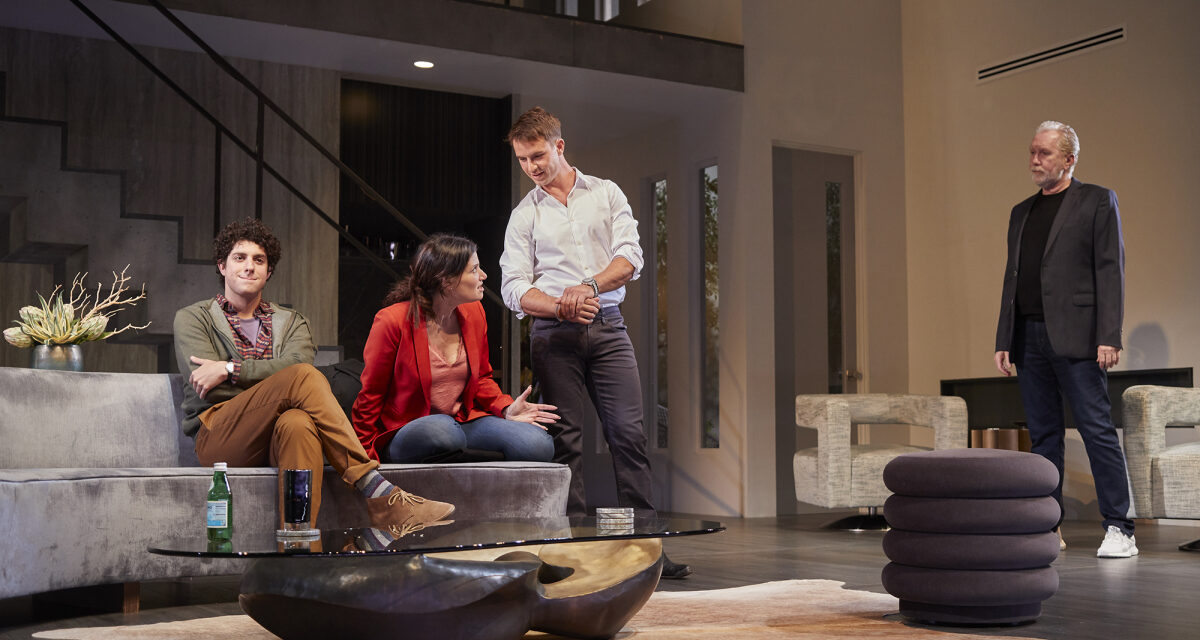 Elliot:  “You don’t get to choose people’s words, Jodi.”

Nestled in the heart of Westwood where stores and restaurants cater to students at UCLA stands a gem of a couple of theatre spaces that are owned by the University named the Geffen Playhouse (for donor David Geffen of Asylum Records, Geffen Records, and Dreamworks SKG, among other accomplishments). The Playhouse consists of two spaces named the Audrey Skirball Kenis Theater and the Gil Cates Theater, and last night an audience was treated to, if not challenged by, the West Coast Premiere of Skintight, written by Joshua Harmon and directed by Daniel Aukin in the latter. Originally commissioned by Roundabout Theatre Company (Todd Haimes, Artistic Director; Julia C. Levy, Executive Director) where it was also directed by Daniel Aukin, this production features three of the original cast members, Will Brittain, Eli Gelb, and Idina Menzel and the chemistry between these three and their LA cast is as seamless and compelling as the play is challenging. 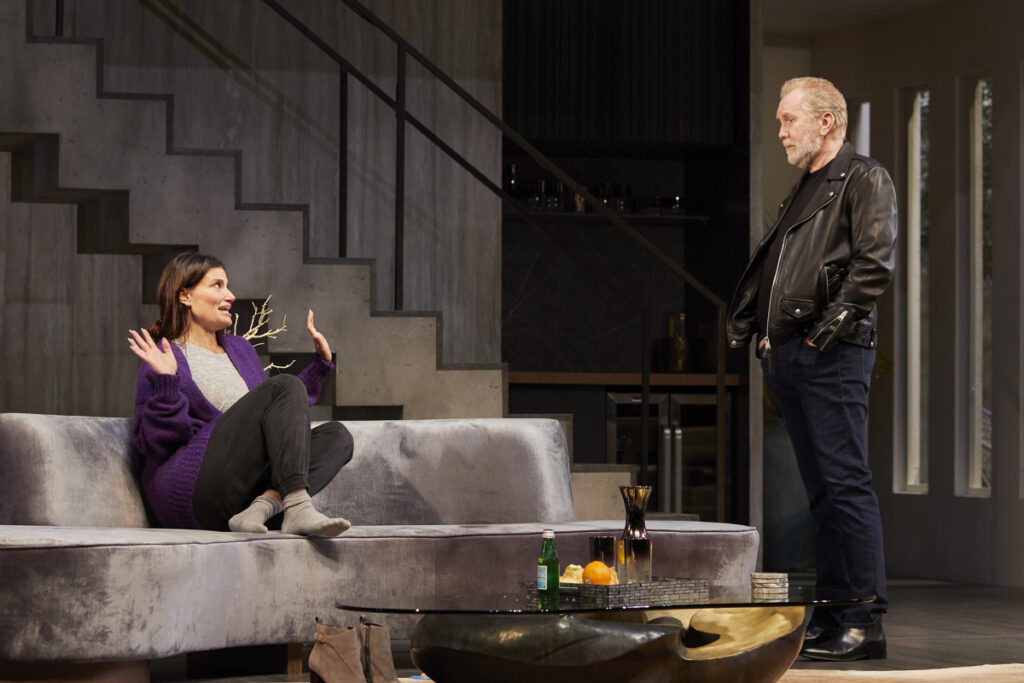 Idina Menzel is Jodi Isaac, a woman in her mid-40s with two children and an ex-husband who has shaken her world to the core with his decision to throw an engagement party with his 24-year-old spinning instructor fiancee at her favorite restaurant in Los Angeles, prompting her to flee to her father’s West Village townhouse where he lives with his latest in a revolving-door-level series of partners, Trey.  Her father Elliot Isaac (played by Harry Groener) is about to celebrate his 70th birthday while 20-year-old Trey (Will Brittain) just happens to be the same age as Jodi’s eldest son Benjamin( Eli Gelb).  Though Jodi knows that Elliot does not like surprises she needs comfort and arranges to have Benjamin fly to New York from Hungary where he is studying abroad in time for a birthday celebration.  She needs her family (you could turn the word into a solid trigger for a drinking game and everyone would lose, she stresses it so often throughout the play) and does everything she can to negate Trey’s presence. 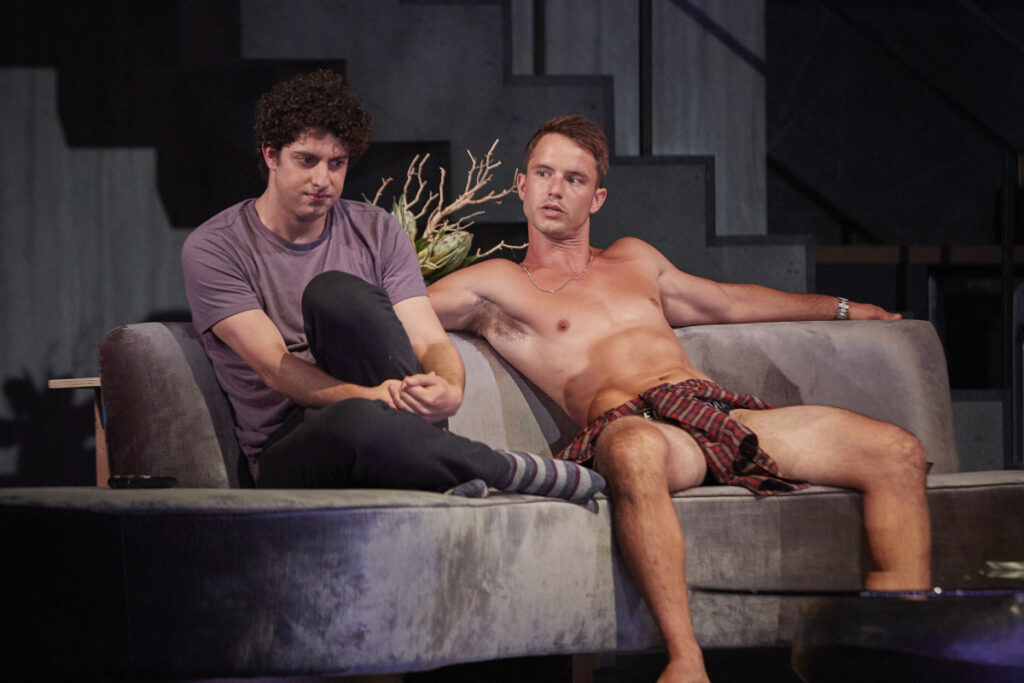 Eli Gelb and Will Brittain in Skintight.  Photo by Chris Whitaker

She can’t take him seriously, and it is hard to find fault with that for she has little reason to do so, given her father’s past.  Elliot employs a male houseboy named Jeff (Jeff Skowron) who we eventually learn has been one of many ‘partners’ in Elliot’s life but even he tries to let Jodi know things are different with Trey when he tells her the two men to hold hands – something Elliot has never done with anyone before.  Trey rides motorcycles, loves to go dancing, and tests Elliot’s patience and Jodi is determined to exclude him from her definition of a family but when she pushes that effort a bit too far, Trey ups the ante and proposes to Elliot, and that bold move nearly tears the father-daughter relationship apart.  Jodi challenges her father to see Trey for the gold-digger he is and Elliot surprises her by declaring he doesn’t care.  He loves Trey for his beauty, and that is enough for him.  “He has lived more years before puberty than he has since.  He wakes up in the morning and he smells like sex,” Elliot exclaims when he takes his stand against Jodi.  “Sex is life. It’s manufacturing, making things, producing, invigorating, creating.  Sex is life, it’s life and I want life.” 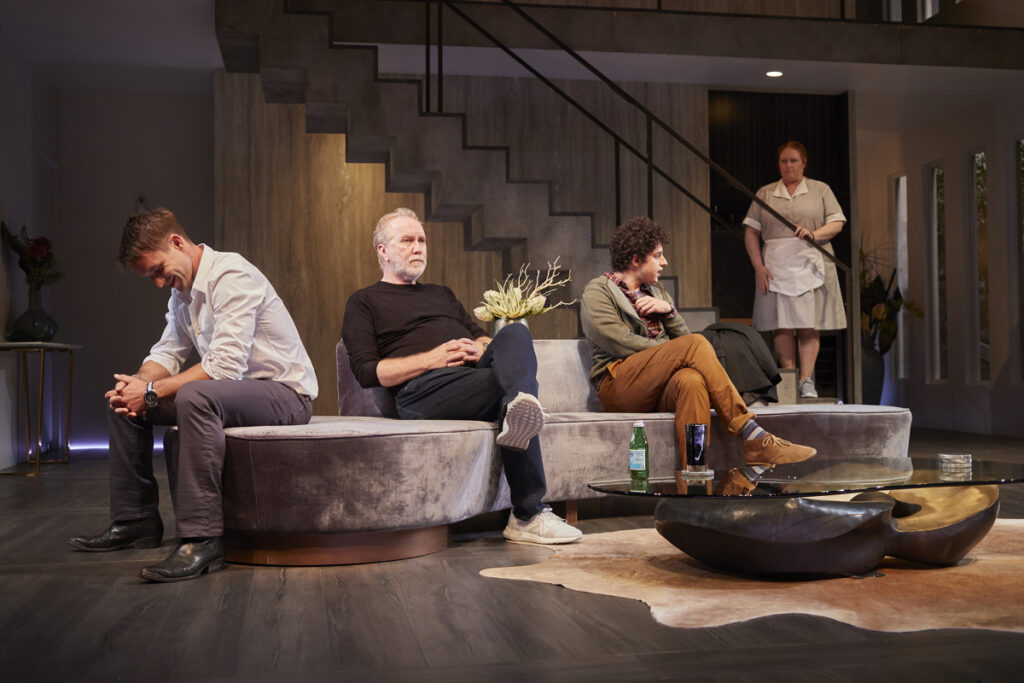 Elliot’s speech comes late in the play after he’s endured Trey’s juvenile outbursts (ripping his shirt off over his head because he doesn’t agree with Elliot’s rules, for example), Jodi’s multiple attempts to belittle Trey and his grandson Benjamin’s seeming attempt to seduce Trey away from him.  Embodied by the incredible Harry Groener, it is a startling moment to watch.  Elliot could have been nothing more than a cardboard cutout of a man who is focused solely on owning beautiful things (Trey among them) but with Groener, Elliot comes across as a man with no shame who sleeps very well at night… when he isn’t trying to make sure Trey stays in line.  “I want to wake up next to life, Jodi.  And I can.  So why the fuck not?”, he more states than asks by the end – and at the performance I attended, a man several rows behind me shouted ‘Hell Yes!’ as if in response to a Sunday preacher demanding his flock obey some kind of commandment.  It’s not a pleasant speech, and it is tempting to be offended by the play’s seeming thesis that being ‘hot’ is all that matters (also a credit to Groener’s performance). 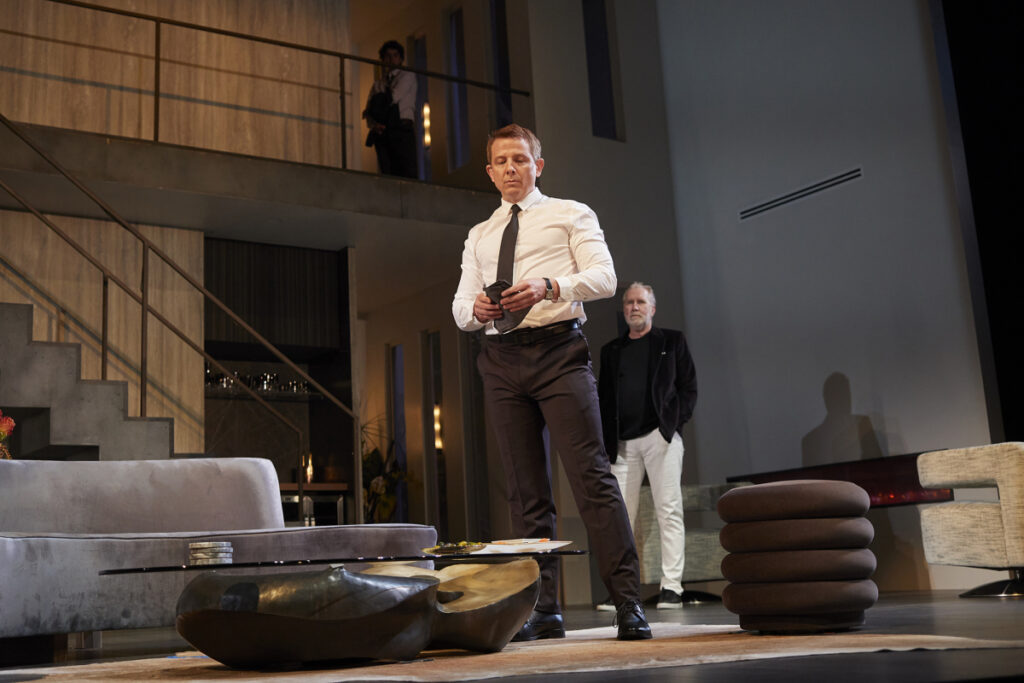 Jodi counters by stating his version of love is really lust and that she knows the difference between the two, and in her final speech to her father, Menzel is at her strongest.  She delivers the first of two things that redeemed Elliot’s harsh take on love and even on the family in the play.  Menzel has masterful timing and knows how to land a joke to the point where the audience’s reaction sometimes overwhelmed the next line of dialogue (Eli Gelb is her partner-in-crime in the best of those moments and the two of them work so well together, we could sit with them for hours).  As strong as those instincts are, at the top of the play Jodi sounds like a mess and for very good reasons but it didn’t actually feel like she was a mess – her crisis ran only so deep and her emotional state felt hazy at best.  The desperate need for a quiet family weekend never felt as vital and real as her grasp of the absurd does in moments such as the one where everyone in the house except she and her son undergo Botox injections, including housekeeper Orsolya, played by Kimberly Jürgen, Jeff’s partner witness to all that unfolds and an actress who understands how to use her presence to great effect without having a line of dialogue to say (watch her climb the stairs with a suitcase and a pile of laundry and you will know what I mean).  Menzel knows how to capture our hearts and sympathies when she tries to slyly demand the attention of every man in the house in her party dress without asking for a direct compliment in ways that would make Carol Burnett proud but it’s hard not to wonder how much stronger a moment like that could have been if it were balanced with a deeper, starker need for some kind of loving support given the fact that her ex-husband has moved on so easily and with the seeming support of her sons and her closest friends.

Even though she has gone to lengths to arrange a meaningful birthday dinner, Jodi decides not to participate and is even momentarily tempted to leave but that is when Harmon and Aukin come in to deliver a final scene that was frankly surprisingly moving.  Titan of industry Elliot declared his verdict and full of longing and need Jodi stood her ground and yet both end up together in an ending that favors action over dialogue that will melt your heart.  It’s at that moment that it is possible to see Trey as something other than just a gold-digger after comfort.  He could be the only person that could make Elliot happy.  It’s at that moment that we have hope that Jodi might recognize that the small gesture from a loved one can be more monumental than the grandest one.  Though no one says it, there’s hope for this group.  Hope that is first slyly indicated earlier on in the second act when Jodi asks Orsolya to translate a letter written in Hungarian on the back of a family photograph she compiled as part of an album for her gift.  When she finishes the translation, Benjamin asks her to read it in Hungarian, and when she does, he quietly cries for the family members he never knew in one of the most subtle and beautiful moments of the night.

Overall, it’s a bit of a challenge to fully love anyone in this play but it is incredibly easy to laugh along with them and that laughter eventually helps the character work their way under your skin, leaving you with a lot to think about.  In the end, that’s exactly what we hope for when we go to the theatre and the cast should be commended for that beautiful accomplishment.