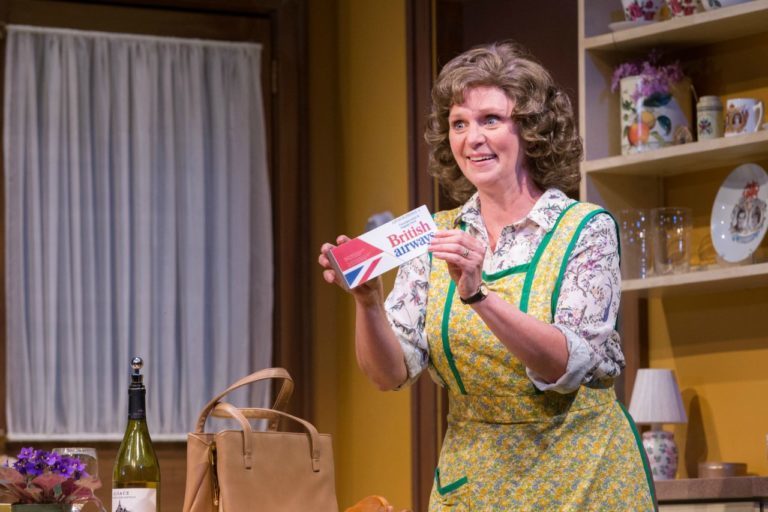 At the 1000 Islands Playhouse in Gananoque, ON.  As the final play of the season, British playwright Willy Russell’s Shirley Valentine is a thoughtful choice. Telling the story of a discontented housewife in Liverpool, England, who seeks more for herself, it leaves comparatively deeper things to ponder than a good-natured musical or comedy does. Like the play Midsummer which was put on at the playhouse earlier in August, Shirley Valentine asks questions about how we find true self-fulfillment and how we can end up being caught in a rut of dissatisfaction.

This serious spirit is carried through well by director Andrew Kushnir, who also takes care to ensure that it is balanced by comedy (the playbill cites the show as being a “comedy of finding yourself,” emphasizing its double-toned nature). That all of this is done through a single actor, Deborah Drakeford, in the role of Shirley is a testament to his effective direction.

The first act opens with Shirley coming home into her kitchen to prepare yet another meal for her unappreciative husband, Joe. With no else for company, she airs her frustrations with her family and life to the wall (and audience, by consequence). An opportunity arises when she is offered plane tickets to Greece from her friend Jane, who is going on holiday there. While she initially accepts the tickets, the decision over whether to leave her husband fending for himself in food and laundry for a fortnight becomes the great dilemma of this act. Giving in to the allure of Hellenic adventure, she decides to go with Jane despite her family’s disapproval. The shorter second act takes place entirely in Greece, where Shirley finds herself to be the happiest and most fulfilled she has been in a long time. It is this new, confident sense of self which propels her to take charge of her life through making a dramatic decision at the end of the play.

In the singular role of Shirley, Drakeford excels. Her enunciation is wonderfully clear, and she always takes care to make eye contact with the audience at regular intervals. When telling jokes or expressing humorous observations, she pauses and looks at the audience, sufficiently allowing for the punchline to sink in. Her comedic timing in this way is excellent. Although her rendition of the Liverpool accent was at first inconsistent, it got better as the play progressed. As with Kushnir’s directorial tone, she is equally credible as the raunchy and matter-of-fact housewife as she is the lost woman passionately bemoaning the dissatisfying life she has fallen into.

The technical aspects of this production are very effective in helping to exude a sense of place, both spatially and thematically. The perfectly square kitchen set in the first act, with its neatly arranged shelves with china teapots and assembly of old-fashioned appliances, is perfectly demonstrative of the supposedly comfortable yet boring existence Shirley currently leads. The white-washed patio and grey rocky crops set against a blue projection representative of the Mediterranean Sea, with all its possibilities, in the second act make an all the more refreshing contrast. The use of Greek-themed music during scenic transitions underscores the adventure to come, giving an air of excitement before Shirley goes there. On these counts, both set designer Jung Hye-Kim and sound designer Debashis Sinha merit praise.

Although Shirley Valentine may be slightly older than our contemporary moment (it recently celebrated its 30th anniversary), its popularity speaks to the deep human desire to achieve self-actualization and the obstacles that we knowingly or unwittingly place between ourselves and this. Given that society has become more work-oriented and focused on material indicators of success, these themes are arguably more relevant than they have ever been.

Shirley Valentine continues at the Springer Theatre in the 1000 Islands Playhouse until October 14. For information and tickets, see http://www.1000islandsplayhouse.com/shirley-valentine/

This article originally appeared in Capital Critics’ Circle on September 25, 2018, and has been reposted with permission.