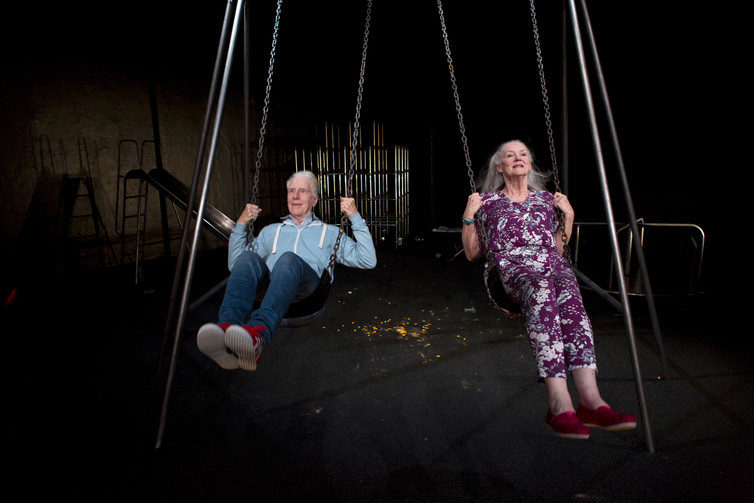 Our experience of plays is always profoundly affected by how they end: comedy or tragedy, death or marriage, hope or despair. My response to Matthew Whittet’s Seventeen (directed by Anne-Louise Sarks at Sydney’s Belvoir Theatre), a play that thinks hard about how our endings are related to our beginnings, is no exception. And that means this review contains spoilers. Sorry.

The motivating idea behind Seventeen is a brilliant one: actors in their seventies play 17-year-olds on their last day of school, poised on the brink of an adulthood which they can barely comprehend. The canny trick of using older actors to perform these roles adds a wonderfully exuberant humour. The cast dancing to Taylor Swift’s Shake it Off – which would have been cut if the pop megastar hadn’t given last-minute permission for the song’s use – is one of the most joy-filled moments on stage I have ever seen.

But it also lends poignancy and a searching irony. As they inhabit the gauche attitudes and awkward physicalities of late adolescence, the questions posed by the bodies of these actors are potentially devastating: which of their dreams will come true? Will their hopes be fulfilled?

If there is despair, will the future bring consolations? What happens to love? As awareness of mortality creeps into our lives, what will have been important to us?  or all its consideration of the relationship between childhood and future lives, this is a conservative play. And, as a gay man watching the play’s ending, I felt I’d seen this story too many times to feel part of its investments in the future. Here’s what happens:

Half way through the play there’s a touching scene between the characters of Tom and Sue. Sue is going out with Tom’s best friend, Mike, but Tom confesses his love for her by telling her about a dream he’s had in which they grow old together, surrounded by grandchildren.

Played by Peter Carroll and Maggie Dence, it’s a touching pause in a night of frantic teenage activities. The final scene echoes this moment as Tom and Sue sit on swings together (the play is set in a suburban playground), flying upwards towards a possible future in which Tom’s dream could come true.

Throughout the play, Mike is the character most resistant to the idea of growing up. He wants to hold on to the last remnants of childhood before they are cruelly taken away from him. He also, on finding out that Sue has been pashing Tom, admits that it is Tom that he has loved all along.

This provokes a tender moment in which Mike (played by the endlessly charming John Gaden) recalls, for Tom, their first meeting as much younger kids when Tom had taken him under his wing. But there is no reconciliation between these friends. Mike, perhaps rightly seeing no future in maintaining a friendship that has gone wrong, hurries himself off stage.

I wanted to follow him. I wanted to have a stake in his future and not in Tom and Sue’s future grandchildren.

So, it’s that old story: straight people have a claim on the future. Gay people don’t. I had sat through this joyous play, laughing and crying with these characters, only to be told the same thing I’ve been told since I was a kid.

Why is this story so persistent?

Freud, in the early 20th century, allied homosexuality to immaturity, claiming that it is marked by an inability to grow up, to make properly adult sexual attachments. “I don’t want it all to change yet,” Mike says, early in Seventeen and wishes that he could “freeze time so nothing ever changes”.

Freud’s theories imply, and depend upon, a narrative arc that is much older than psychoanalysis, as old as comic drama itself: one in which only heterosexual marriage is synonymous with a happy ending.

Shakespeare’s comedies are classic examples. At the end of Twelfth Night, as Sebastian is due to marry Olivia, what has happened to his friend Antonio, the dashing pirate who, like Mike, has declared his love and will risk death to help his beloved companion?

I do adore thee so
That danger shall seem sport

We don’t know because, just like Mike, Antonio doesn’t get any lines in the final scene and is excluded from the play’s investment in that universal happy ending: straight marriage with kids.

Queer theorists such as Lee Edelman, Annamarie Jagose, and Jack Halberstam have, in the last decade, reclaimed the idea of a non-productive future as their own, our own, resisting the telos (happy ending) of growing up/ marriage/ reproduction. In No Future: Queer Theory and the Death Drive (2014), Edelman calls this: “an insistence on the negativity that pierces the fantasy screen of futurity.”

Perhaps, when he was bunking off school, Mike was secretly reading No Future?

So, if I run off-stage with Mike, “shaking off” the straight swinging couple, we’ll both run into Antonio the pirate and together we’ll dream up future happy endings. I don’t know what they’ll be yet, because nobody seems to want to tell those stories.
Seventeen is at Belvoir Theatre until September 13. Details here