The cast of "The Rocky Horror Show" at the Stratford Festival. Photo by Cylla Von Tiedemann

Initially, I wasn’t too sure if I really wanted to see Rocky Horror again as I felt I had seen it enough already. Director Donna Feore certainly made me feel welcome, when I changed my mind, with the warm invitation in her Director and Choreographer Notes:

“It doesn’t matter who you are or where you’re from; right here, right now, you’re family. So come as you are, in whatever you like, and take your rightful place.”

As I sat quietly and waited, I amusedly watched a few patrons either fully or partially dressed as some of the characters. Others did just wear whatever they wanted and proudly waited for the show to begin.

When the opening bars of the overture began and ghastly clad Usherette Erica Peck strutted out and welcomed us to the “late night, double feature picture show,” I was hooked again. No regrets here as I had a hell of a good time as did others around me, especially those who threw sometimes questionable comments, insults, and remarks to the actors on stage, all in the name of the cult fun and spirit.

Nerdy Brad (a tip top Sayer Roberts) and supposedly virginal Janet (terrific vocals from Jennifer Rider-Shaw in Touch-a-Touch Me) declare their love for each other as they drive home from a wedding of mutual friends. It’s a stormy, rainy night and their car breaks down. The couple walks in the rain to the light to get help and arrive at the spooky castle of the “sweet transvestite,” Dr. Frank N. Furter (a wonderfully “hot” Dan Chameroy) along with his creepy castle denizens. Frank N. Furter is nearly finished in the creation of his perfect man, Rocky. Think of the Victor Frankenstein story, and mix in the late body builder and actor Steve Reeves.

The curtains are closed before the performance begins, but I felt I was transported back to the era of the double feature picture show. From what I could see, there appeared to be patches sewn on the musty curtains that would have been apropos of the small-town movie theatres of the late 50s and early 60s. Dana Osborne’s costumes were a visual delight from the early 60s outfits of Brad and Janet to the tattered and torn clothing fragments of corsets, bustiers and black fishnet stockings which reminded me of the Berlin nightclub settings from the film version of Cabaret. Michael Gianfrancesco’s set design is splendidly cheesy yet moves seamlessly from Brad’s car to Frank N. Furter’s castle and, ultimately, to the campy eleventh-hour big Floor Show production number.

I kept writing so much down during the opening ten minutes that I finally stopped as I didn’t want to miss anything else. In big bold letters, I wrote F U N in my book and nothing more. Recently, I had written in another review that it’s ok to have fun at the theatre and not be so concerned with the specifics of human nature and why people might behave the way they do for a sundry of reasons.

I just wanted to enjoy and simply be in the moment with these electrifying and magnetic performers. Who cares if the plot didn’t make sense at time? I had fun listening to the wild rock and roll music of the late 50s and early 60s. I had fun imagining how dangerous it might be with sinister characters who wanted to take over. And I tip my heart to Donna Feore and Music Director Laura Burton for extending the invitation to come and just have fun.

Dan Chameroy is a sexy and confident Frank N. Furter. The roof nearly blew off the ceiling twice from the audience’s reception at Chameroy’s first entrance and then his I Can Make You A Man number. George Krissa’s muscled and skimpy brief-clad Rocky is quite the eye candy for the sexually frustrated, yearning and coming of age of the trampy Janet. Erica Peck (Magenta) and Kimberly-Ann Truon (Columbia) are delicious belters extraordinaire. Robert Markus is an exquisitely eerie Riff Raff. Trevor Pratt as Eddie brought the house down with his Hot Patootie. The chorus of scantily clad Phantoms hauntingly underscored the freaky and kooky atmosphere.

I’m always fascinated how Rocky actors maintain their composure during performances as audience retorts and comments become rather “adult-like” in nature. Narrator Steve Ross impressed me in his concentrated focus at one point, with nary a laugh or smirk, in pulling the famous Michael Jackson move after an audience comment.

Final comments: Yes, it’s possible to read messages of acceptance, belonging, and discovery of who we truly are in Rocky Horror’s story. This time, I chose to sit back, watch, listen, and hear a magnificent company having a good time and transferring that fun to the audience. It takes work, but damn it’s good fun.

The performance runs approximately 2 hours with one 20-minute intermission.

This article originally appeared in Onstage Blog on August 18, 2018, and has been reposted with permission. 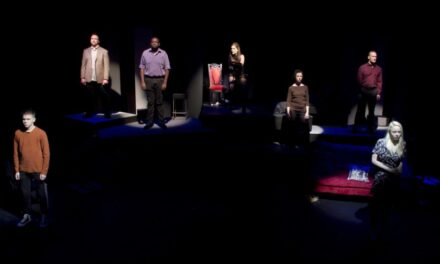