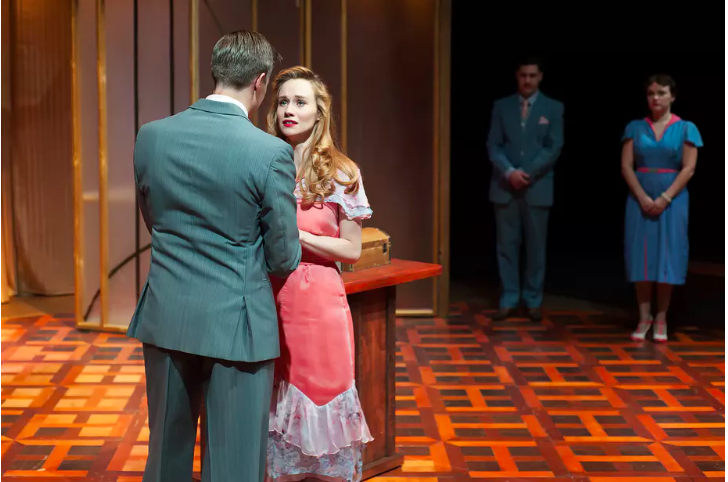 Sport for Jove’s production of Shakespeare’s "The Merchant of Venice" is now onstage in Sydney. Sport for Jove

The Merchant Of Venice (first published in 1600) boasts a problematic and sometimes controversial stage history.

During the second world war, Hitler’s “Reichsdramaturg” Rainer Schlösser organized a highly edited version of the play. In it, Shylock’s daughter Jessica was altered to his foster daughter to prevent German actresses from playing Jewish characters (for more, see John Drakakis’ Arden edition of The Merchant Of Venice).

Far more recently, in 2012 the Globe Theatre in London featured a Hebrew performance by Israel’s Habima National Theatre. Demonstrators protested during the performances (read more about both the performance and the protests here and in this review).

In an entirely different interpretation, Rupert Goold’s 2014 production set his Merchant of Venice in Vegas and turned the casket lottery into a televised game show (watch the trailer here).

The Merchant of Venice in Sydney

Sport for Jove’s current production, directed by Richard Cottrell, opened at the Seymour Centre this weekend after playing at the Riverside Theatre in Parramatta.

This production is set in a vaguely 1930s era. Anna Gardiner’s set is understated and minimalist: a circular parquetry floor and frosted glass doors. This design is peopled by an elegant and sophisticated ensemble: the eponymous merchant, Antonio, is perfectly cast and eloquently played by James Lugton. He is mysteriously sad for reasons unbeknownst to us but nonetheless is happy to risk his fortunes to enable his much-loved friend Bassanio (Chris Stalley) to woo Portia (because Bassanio needs her fortune). 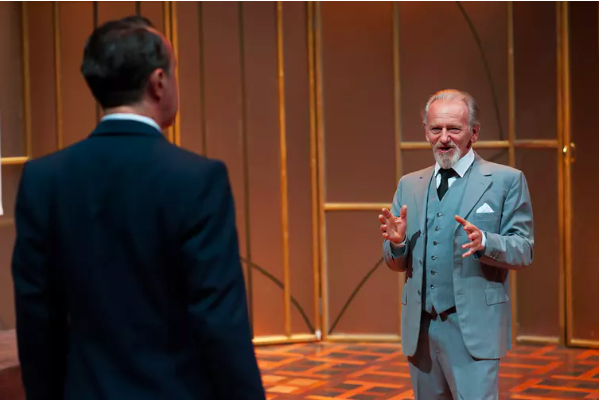 The Merchant of Venice onstage. Sport for Jove

Antonio agrees to a bond with the Jew Shylock, which if forfeited will see him lose a pound of flesh. Shylock, in the hands of John Turnbull, becomes irrepressibly enjoyable to watch, and his delight at the prospect of vengeance is contagious. The means to Bassanio’s financial success, Portia (Lizzie Schebesta), is refined and formidable, despite the fact that her marital joy depends on a lottery.

Rounding out the play’s subplots, Shylock’s daughter Jessica (Lucy Heffernan) elopes with Lorenzo (Jason Kos), one of the men of Venice who are as impeccably dressed as they are unabashedly prejudiced. Meanwhile, Gratiano (Damien Strouthos), the most outspoken and entertaining of the Venetians, secures the affection of Portia’s maid, Nerissa (Erica Lovell).

Cottrell’s production is characterized by outstanding clarity. The play is delivered crisply and clearly; emphasis is placed on ensuring that as few lines as possible slip out of the actor’s grasp.

The rich and commanding voice of Schebesta’s Portia gives credibility and power to this role, especially important during her cross-dressing turn as a lawyer.

Similarly, Turnbull masterfully makes the most of Shylock’s rhetorical style, which is characterized by highly repetitive language. Lancelet Gobbo (Michael Cullen) adopts playful accents to convey the conflict between his inner devil and his conscience, while Jonathan Elsom also transitions from the lower class accents of Old Gobbo to the elderly, quavering voice of the Prince of Aragon, and to the elite Duke.

Due to the clarity of these performances, it is an ideal production for students or perhaps even those who simply don’t often see Shakespeare in the theatre.

There is, though, a more ambiguous sense of isolation generated by the space of the play. The two locations – Venice and Belmont (Portia’s home, where the money-hungry Bassanio comes to win both wife and fortune) – seem disconnected from any sense of a real world.

The play relies on but feels distant from the merchant world of naval ventures where the Venetians hazard all their worth in precious goods and exotic locations. For a play peppered with nautical references, we are very far from any sense of this world. Visually, there is also no discernible difference between Venice and Belmont, making the entire production feel as if it is set in one small and inward-looking world.

In addition, this production also feels strangely distanced from – or deliberately refraining from comment on – its entrenched prejudices.

There is a cruelty to the comedy of The Merchant of Venice that the production neither shies away from (to its credit) nor overtly works with.

There is callous racism: the Prince of Morocco (Aaron Tsindos) comes to woo Portia, asking that Portia “[m]islike me not for my complexion”. Dressed like an over-emphasized Lawrence of Arabia and with an exaggerated theatricality, the production embraces Morocco as the embodiment of an exotic othered stereotype. When he fails the casket test, Portia laughs and says, “Let all of his complexions choose me so”. Earlier, she unkindly imitates her other suitors: the Frenchman, the Englishman, the German. 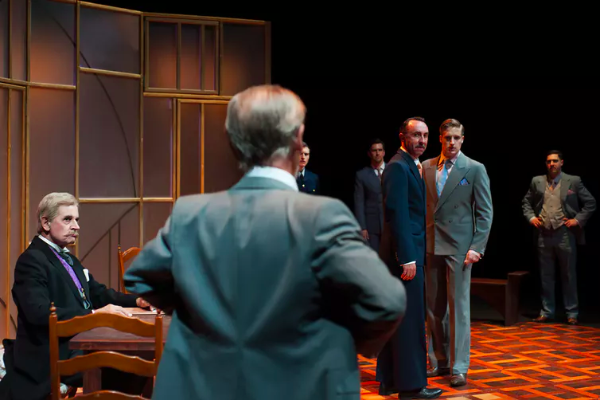 The Merchant of Venice. Sport for Jove

This kind of casual cruelty and racism puts a modern audience in a very awkward position. Does this not dampen our desire to see Portia achieve her happy ending?

Sport for Jove’s production is relatively silent on this question.

There are many similar moments of cruelty. Lancelet decides to “try confusions” with his poor blind father (Elsom) by telling him that his son is dead. Later the elderly and unwell Prince of Aragon, attended by a doctor, is mocked as he too fails Portia’s casket test. When recounting Shylock’s reaction to his daughter’s elopement, Solanio (Darcy Brown) and Salerio (Tsindos) mimic his distress over the loss of his “ducats and [his] daughter!”

Throughout, Sport for Jove does not pull back from these awkward moments, but the production also doesn’t strive to frame a response or reaction to them. Nor does it overtly seek to foreground these elements – the production notes contend that:

The relationship between [Shylock and Antonio] is not about a Jew and Gentile but about two men who hate each other.

While the notes acknowledge that “race is a factor,” the production does not seem to want to focus on negotiating these moments of discrimination, and so leaves them relatively unaddressed. While the highly xenophobic and mercantile world of the play resonates incredibly strongly with modern concerns (as demonstrated by its production history), this production doesn’t explicitly touch on that connection. In this way, it does not make a decision on how to respond to the play’s xenophobia. This indecision is refreshing in one light, and frustrating in another.

Occasionally in the first half, the production’s pace seems to lag a little, and there are some under-utilized comic moments.

Cottrell also cuts the song which is performed while Bassanio chooses a casket (this is a shame, as the song may give Bassanio a hint in the right direction). Further, the production does not especially highlight the homosocial or potentially homoerotic connection between Antonio and Bassanio. Other changes were good: Cottrell creates a female attendant for Portia (Pip Dracakis as the invented Beatrice, instead of male servants) and merges Solanio’s part and the Gaoler’s.

The second half of the production was stronger, with a focused and brilliantly executed court scene and a warmly funny final act with its crowd-pleasing play on Portia and Nerissa’s rings.

Turnbull’s Shylock is excellent in his final scene, adeptly incorporating humor, villainy, and empathy. At this point, in the excessive punishment that strips away from Shylock everything he values, Sport for Jove’s production begins to show its awareness of the difficulties inherent here. Portia is visibly taken aback by this outcome, wiping away tears.

This self-awareness is reinforced in the play’s closing moment. Jessica is left alone onstage, looking out silently at the audience. Having fled her father’s house, married a Christian and converted, she has reappeared with blonde hair and a vibrant pink dress – trying perhaps to imitate the blonde Portia with her pink accessories – but in remaining onstage alone at the end, lit up in pink (lighting design by Sian James-Holland), she hints that all is not well.

In this, the production reminds us that silence, in the words of drama scholar Peter Lichtenfels is a “strategy of important yet elusive characters such as Jessica”. In a play that does not always give an explicit voice to the marginalized or persecuted, a lot can be done with silence.

This is a lucid production that does not delve as deeply into some of the troubling issues raised as it could. That said, it presents a complex play with a sharp, understated and charming clarity.

This post originally appeared on The Conversation on May 25, 2015, and has been reposted with permission. 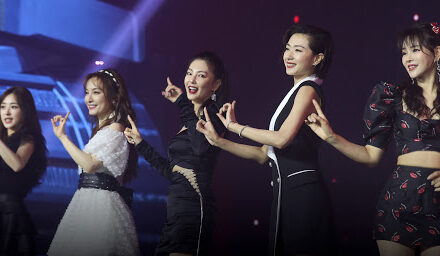