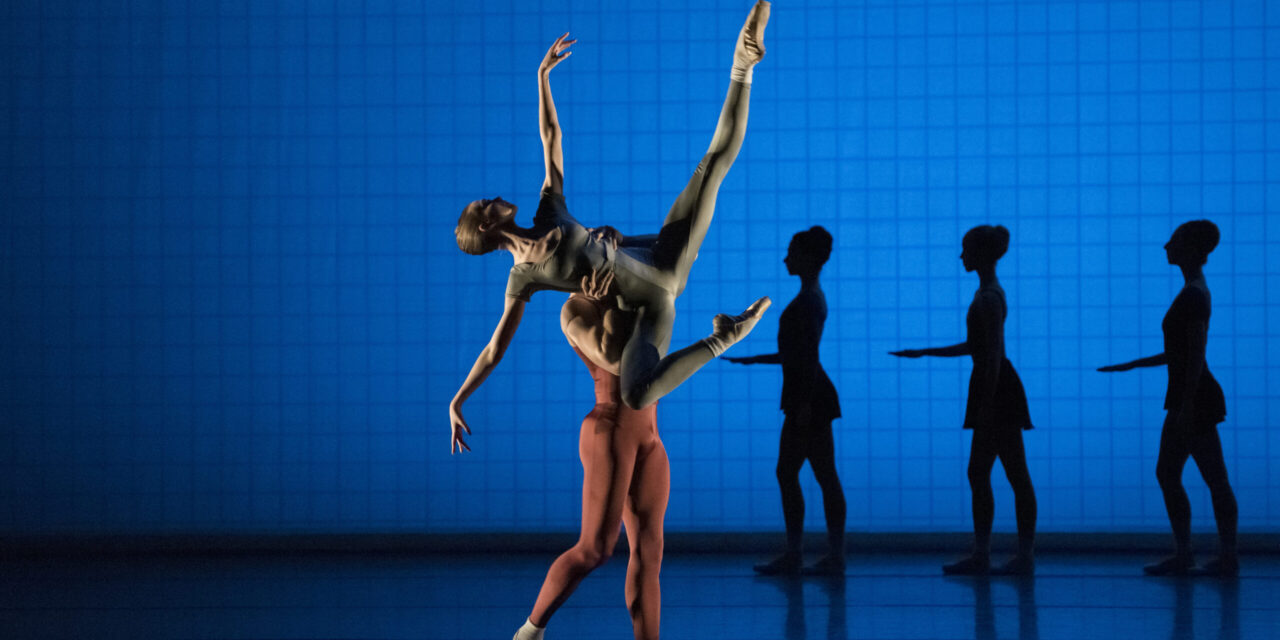 From Stravinsky’s dissonant strings heralding the arrival of four black and white clad men in the Pas de Quatre of George Balanchine’s Agon, to the final shimmering teal twist of dancers in William Forsythe’s In the Middle, Somewhat Elevated, Boston Ballet has once again provided a thrilling program of contemporary choreographers Balanchine, Jerome Robbins, and Forsythe. These celebrated choreographers represent a few of the men who “revolutionized” contemporary ballet the world over and with this program—and many over the last few years—Boston Ballet continues their tradition of “revolution.” It is, of course, gorgeous work once again gracing the stages of the Boston Opera House. But it is work that has me pondering the concept of this “Dance on the edge”—their subtitle for this series. Is this still the edge? And is the “revolutionary” the new normal?

Section one, Agon by George Balanchine returns to Boston Ballet from its 1991 debut in the city. This three-part ballet was the definition of revolutionary as it stunned audiences in 1957 when it premiered at the New York City Center. Balanchine’s pared-down, narrative-less movement had dancers turning and flexing out in ways completely novel to audiences. The excitement and tension of the piece was buoyed by Stravinsky’s dodecaphonic score; one easily hears the strains of Bernard Hermann’s later Psycho score in the aggressiveness of the bows. Critics lauded the piece for its utterly modern shapes but also for the intentional boundary-breaking casting of the piece. Arthur Mitchell, one of the first black male principal ballet dancers of a professional dance company, took the stage with white Diana Adams to share in an equally regal and erotic pas de deux; he in a white shirt and black tights, and she in a black leotard and white tights. Mitchell told of Balanchine’s preciseness in highlighting the physical difference, while also constructing a flowing intimacy. While some of the social import of this progressive premiere may be lost on modern audiences, the intimacy and complexity of Balanchine’s choreography remains. In this version, principal dancers Paulo Arrais and Lia Cirio take the pas de deux. Both are strong, attractive performers, and it is always a joy to see Lia Cirio’s lithe expressiveness.

Section two, Glass Pieces by Jerome Robbins is decidedly more colorful—literally: the entire 42-person dance ensemble is decked out in muted pastels—and artistically energizing. While Balanchine delights in the twisted, nearly cacophonic music of Stravinsky, Robbins draws his dynamism and inspiration from the driving rhythms of Philip Glass’ compositions. Part I. Rubric captures the vital energy of a metropolis, with cascades of pedestrian/dancers steadily moving across the stage, only to surprise and upend the traffic-like energy by a single shared phrase; a bend, thrust, or quick twist. Part II. Facades remains one of the best choreographic manifestations of Glass’ polyrhythmic musical structures. Far upstage, in silhouette, a seemingly endless assembly line of female bodies move in simultaneous phrases against a large gridded scrim. Before them downstage, dancers Addie Tapp and Patrick Yocum share a lovely energetic duet. While I truly wanted to watch the pair, my attention continued to be drawn to the repetition incessantly moving across the stage in shadow. Much like Glass’ best music, the slight variation of the pair demanded attention but was easily lost amongst the driving rhythms undergirding the work. Finally, Akhnaten, Part III of this work, groups the dancers by gender, gliding through one of Philip Glass’ best opera compositions. While ultimately playful, there are moments when the men’s choreography is strangely campy—there is something about the shape of men running across the stage, one hand on their hip and the other arm outstretched, palm facing outward that reads as a little like vogueing. The shared group dancing is joyous and resonant of Robbins choreography for the “Dance at the Gym” in West Side Story twenty years previous. The final part of this trio of choreographers is the perennially celebrated William Forsythe. In the fourth year of his five-year partnership with Boston Ballet and on the heels of his inventive exhibition at the ICA last year, Forsythe returns with In the Middle, Somewhat Elevated. This work, when it premiered in 1987 at the Paris Opera Ballet under the direction of Rudolf Nureyev, stimulated critics and audiences alike, and, as The Guardian wrote in 2015, “was the one that illuminated everything around it, that made its creator and dancers international names to be reckoned with.” Beneath two golden cherries, suspended above the stage (hence the title), nine dancers in teal/green leotards construct the off-balance, sculptural work of Forsythe, punctuated by the rhythmic metallic clangs of Forsythe’s frequent collaborator Thom Willems. The pas de deux naturally garners the bulk of the attention here, and soloist Tigran Mkrtchyan almost steals the show, with his muscular spins and confidently tight landings. He is also portraying a character that is read as preeningly self-absorbed. At one point he actively shoos away a female dancer so he can take center stage; she thankfully continues to perform in the corner. With the testicle-like cherries floating above the proceedings, I couldn’t help but feel that the whole affair suggested something overtly…masculine.

Which itself reminds me of the premise of this night of dance: Revolution. While these men represent an “edge” of ballet choreography, I question that status in ballet today. It has been over 35 years since George Balanchine shuffled off this mortal coil; over 20 years for Jerome Robbins. Thankfully Forsythe is still with us and is working brilliantly. We have and will continue to foist the choreographic visions of these men, and their names do sell tickets, but this revolution has been televised repeatedly—especially here in Boston. While it would be foolhardy to deny them their place as once revolutionaries—just as one would mark Gandhi, Zapata, or Trotsky as once political revolutionaries—in the contemporary ballet world, I ask, “what is revolutionary today?”

I have one suggestion: highlighting more female choreographers. It was George Balanchine who said, “In ballet, however, woman is first.” (This after he called men better cooks, athletes, musicians, composers, painters, and poets, “because they have to write beautiful poems for women—odes to a beautiful woman.”) While ballet remains a field that glorifies the female form and constructs fantasies around the role of the ballerina, it is surprising how much of the field remains framed by the male gaze. Boston Ballet has programmed smaller works by women, the last original piece being in 2016 with Karole Armitage’s Bitches Brew as part of Mirrors, yet it is uncommon in the field for female choreographers to take center stage. It certainly has me looking forward to Carmen coming mid-March to the Ballet, where Boston will once again see Helen Pickett’s work take the stage and next season’s closure (May 20-30, 2021) ChoreograpHER, which will feature all-female choreographic works. That, in my estimation, is “dance on the edge” and borders on revolution itself.