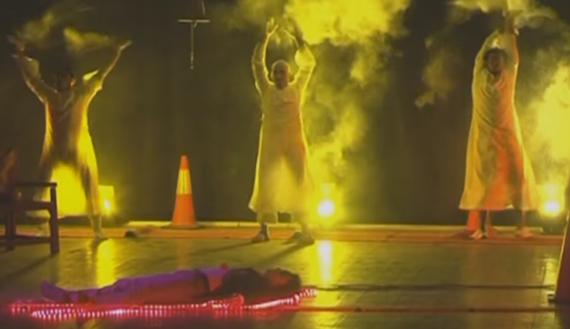 Political violence (resistance violence, revolutionary violence, state violence, wars and terrorism) has been a compelling topic for many playwrights and researchers. As far back as the classical drama of ancient Athens, plays like Prometheus Bound, Oedipus Rex, Antigone, and the Bacchae have depicted violence that could be, in a sense, regarded as ‘political.’ During the Renaissance, terror was used as a “weapon of state power”, and this is reflected in some of the Elizabethan dramas where “Renaissance tragedy has its origins in Tudor terror and in the embryonic British state as much as in the Italian city-state of Machiavelli” (Orr & Klaic 3-4). However, it is chiefly in the twentieth century that playwrights like Sean O’Casey, Peter Weiss, Trevor Griffiths, Bertolt Brecht, and Edward Bond have explored the dialectics and problematic of violence and resistance, violence and revolution, and violence and terrorism, seriously and in-depth. Their plays address the ethical and political problems of the justifiability of violence in the theatre. Even more recently, with the escalation of terrorism as a global phenomenon, contemporary playwrights like David Hare, Victoria Brittain, Gillian Slovo and Robin Soans have begun to deal with such issues as the “War on Terror,” the investigation of terrorism suspects, and the personality of the terrorist.

In Political Violence in Drama, Mary Karen Dahl postulates that contemporary playwrights “variously recognize, manipulate, and focus the conventions,” which she sees as the “directed use of violence,” to “create diverse images of human power” (Dahl 10). Contemporary dramatists who explore the use of political violence are asking “whether directed violence can resolve the crisis [the polemical legitimacy of using violence] (or at least revive the health of the body politic)” (9). They investigate the problematic legitimacy of political violence, asking whether “directed violence or even a spontaneous sacrificial event could generate the belief systems and social institutions that might re-establish the distinction between legitimate and illegitimate violence” (9).

Since political violence is a recurrent noticeable phenomenon in the history of Iraq, the representation of political violence in the Iraqi drama has ideologically taken different shapes; it has been dramatized either directly or indirectly through various dramatic vehicles and trends, be they mythology, history, folklore, and so on.   In the pre-invasion era, the oppressive Ba’athist regime tried to control and mobilize the Iraqi political drama for its ideological goals. However, a few playwrights managed to escape the censorship and sometimes jeopardize their lives to produce plays (whether by utilizing indirect strategies such as Western drama, far-reaching settings, and experimental modes of representation, or by employing a direct realistic approach to probe and expose the deepest tragedies lying in the protagonists’ lives and situations) that touch on the oppressive policy of the Ba’athist regime. Nonetheless, in the post-invasion era, the depiction of political violence revolves mainly around the American invasion and the destruction caused by the invasion. To portray the violence perpetrated by the Americans and their allies in Iraq, Iraqi playwrights use various dramatic techniques and modes of representation such as mythology, fantasy, realism, etc.

After the invasion in 2003, numerous playwrights and directors, like other artists and scientists, fled the country and started producing plays in Arab-speaking countries (such as Syria, Jordan, the United Arab Emirates, Morocco) and in European countries (such as Denmark, Sweden, and England).  The issue of political violence was a prominent theme in most plays produced during this period. The majority of contemporary plays showed a sort of traumatic violence where the American invasion and its military presence were represented as the only reason or agent of the current political violence in Iraq. Torture, destruction, and displacement were depicted as committed mainly by Americans as in Aslak Sha’eka (Barbed Wires), Shahwa al-Nahayat (The Lust of the Ends), Ishtar fi Baghdad (Ishtar in Baghdad) etc. Other plays explore alternative agents of violence such as Abdul Razaq al-Rubai’s Umara al-Jahim (Hell’s Evangelists), Muhaned Hadi’s Hadher Tijwal (Curfew) and Fi Qalb al-Hadath (In the Heart of the Event), Kahil Khalid’s Wehdet al-Inaya al-Muraqeza (Intensive Care Unit), and Haithem Abdul Razq’a Dhilal (Shadows). 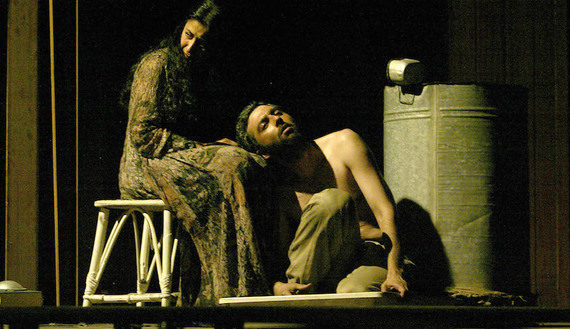 Iraqi actors perform on the stage of the damaged Al-Rashid Theater in Baghdad May 4, 2003, during the first post-war theatre play in the city. Photo by REUTERS/Damir Sagolj

While most of the English language plays about violence and terrorism in Iraq try to awaken the audience to the deception and ‘spin’ practised by their governments’ policies and therefore ignore other important violence-agents and violence-facets, a number of Iraqi plays either represent violence that has been overdone by the media and thus indulge the traumatized[2] audience in their self-pity, or encapsulate their argument about violence in fantastic, mythological, poetic setting and language. Hence, I think that neither the English language nor the Iraqi-Arabic playwrights may be judged to have succeeded comprehensively and objectively in incorporating the main factors that have caused political violence in Iraq.

Several Iraqi-Arabic and English language playwrights show violence against Iraqis as a result of the invasion/occupation only, especially in the Iraqi plays where the Americans are portrayed as the new (barbarian) Mongols.  They either neglect or ignore other factors that cause political violence. In fact, many of them, except for Betrayed and Hell’s Evangelists, do not mention or reveal the violence that is caused by, for instance, religious militias, al-Qaeda, the new Iraqi government, and other Arab countries in the region.  In the case of the Iraqi-Arabic playwrights, their limited view might be a result of either the playwrights’ religious, ideological, and artistic background, the influence of the media, or the playwrights’ fear of being targeted.

Regarding the English language playwrights, their narrow depiction of violence could stem from either the influence of the media and journalism as the key source for their drama, the collective (passionate) feeling of guilt as being subjects of the invading governments, the intention of addressing the Western audience only, or their lack of a complete understanding of the real situation in Iraq.

It is important to note that while playwrights of this period tackled the issue of political violence, the direct representation of revolutionary and/or resistance violence in Iraqi plays is rare.  Why do Iraqi playwrights, in spite of the obvious public indignation and dissent against the American occupation and the new Iraqi government, refrain from advocating and/or utilizing revolutionary and resistance violence?[3]  There are possible interpretations that may be assumed to answer this question. It could be that Iraqi playwrights may not believe in violence as a cure to the problem of the occupation. Many people in Iraq have not believed that violence could end the occupation. However, this does not deny the fact that nearly all Iraqis have been unhappy with the American presence. Second, Iraqi playwrights could be afraid of being politically prosecuted or tracked down by the government/the dominating militia groups. Fear of being arrested has historical roots in the Iraqi memory— many writers and artists were captured and tortured during Saddam’s reign. Third, they might be concerned about being labelled as violence agitators.  Fourth, they might not believe in the direct depiction of revolutionary or resistance violence nor in the direct address/communication in drama.

Because the main source for English language playwrights who write about Iraq is the media and soldiers’ testimonies, verbatim might be the appropriate dramatic vehicle to show the conflict in Iraq. The problem here is that the media is not a completely reliable source of information, not even taking into account the ideological orientation. However, what verbatim drama tries to achieve, as Alecky Blythe claims for her plays, is to “provide insight where journalism fails” (Verbatim Verbatim 101); for Soans, it provides a venue for the people to speak for themselves, an “implication of otherwise lost voice” (ibid 32).

As for Iraqi playwrights, experiencing at first hand the traumatization of the populace, their main source is the knowledge of the situation which comes from their ongoing involvement in the daily struggle and violence. Some Iraqi playwrights draw on the media itself to write their plays, as in dealing with the Abu Ghraib scandal. Channels like al-Jazeera and al-Sharqiya, imbued with propaganda and nationalistic ideology, have played their own role in manipulating the attitude of many Iraqis and Arabs concerning the war.

In general, it can be said that while most American and English plays about Iraq try, first and foremost, to unveil the public ‘spin’ fabricated by the American and British governments concerning the Iraq war, Iraqi dramatists attempt to dig deep into the tragedy of the situation to reveal the injustice of the invasion and of the human suffering in Iraq. The violence shown in Iraqi plays, though sometimes too passionate and overdone, usually aims to provoke the audience emotionally, or as Qasim Matrood puts it: “the violence in the Iraqi drama tries to generate an impact on the emotional side of the audience which in turn creates a bridge for the audience’s later thinking” (Matrood).

Since 2003 a considerable number of plays have been written and/or produced in various parts of the world, basically in Iraq, the UK and US, as a response to the 2003 war and its consequences in Iraq. In the US and the UK, while some plays have been written by playwrights like David Hare and Gregory Burke, others have been written by what are called “embedded reporters” or adapted from classical and Shakespearean drama to evoke, even indirectly, the issue of the Iraq invasion. Though the dominating form of the plays, especially the British, are verbatim, documentary and tribunal, playwrights have tried a variety of forms, settings, and techniques to represent the issue of the Iraq invasion. The plays written about the Iraq invasion can be divided into five main categories:

Most of these plays are written as a verbatim drama where the playwrights dramatize collected interviews and/or politicians’ and stakeholders’ public speeches using multimedia devices. These plays can be seen as “blips in that broader public theatre” which, hinging on the mediatized and the virtual, shows the social reality of the Iraq invasion and highlights “that perception of the public theatricality”; therefore, these plays could be considered as “part and parcel of the establishment strategy for managing public belief and disbelief that is conducted continuously in courtrooms and parliaments and press conferences and so on” ( Gupta 117).

In studying the Iraqi plays, I have noticed the following: 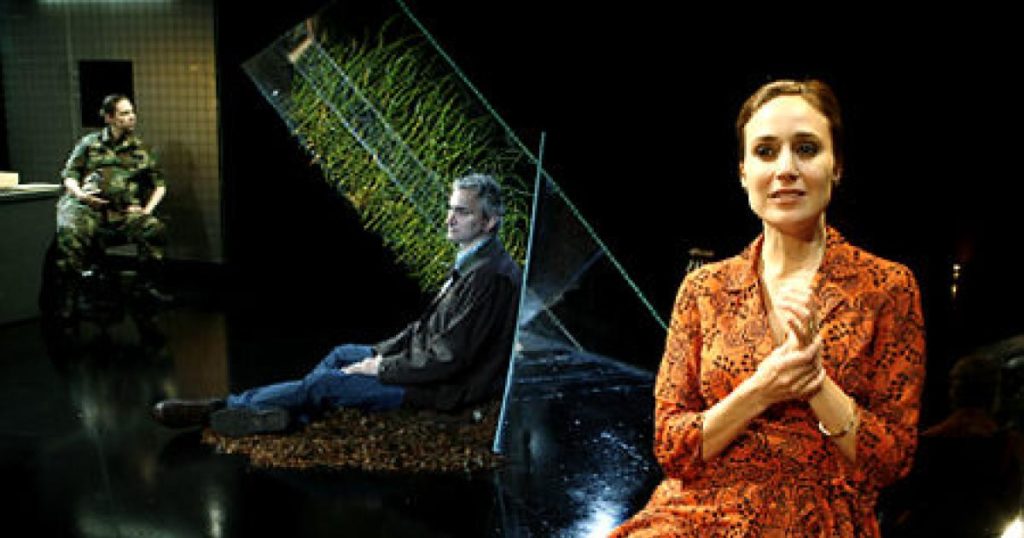 From left: Teri Lamm as Lynndie England, Rocco Sisto as David Kelly and Heather Raffo as an Iraqi woman in Judith Thompson’s Palace of the End commissioned, developed and produced by Epic Theatre Ensemble. Press photo

[1] This article was adapted from Al-Azraki’s Clash of the Barbarians: The Representation of Political Violence in Contemporary English and Arabic Language Plays about Iraq (Doctoral Dissertation). York University, Toronto, ON, Canada, 2011.

[2] By traumatized audience, I mean those who were either affected by or had experienced the violence in Iraq.

[3] During Saddam’s reign, Iraqi dramatists and directors avoided direct and even indirect representations of revolutionary violence as they were very cautious of being impeached by authorities. 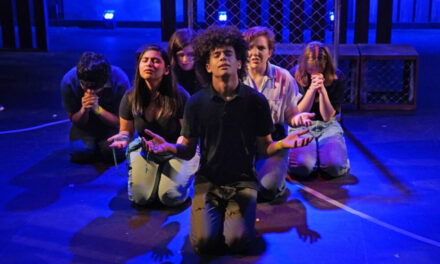 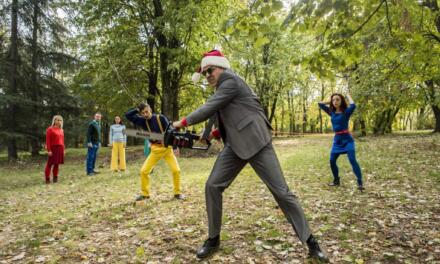 Ecocide is Everywhere in Serbia, but Eco-Theatre Remains on the Fringes 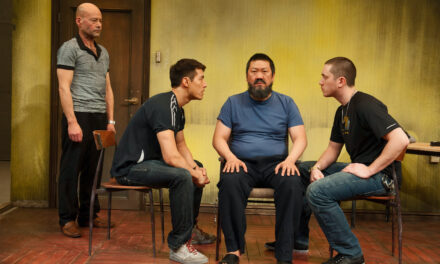