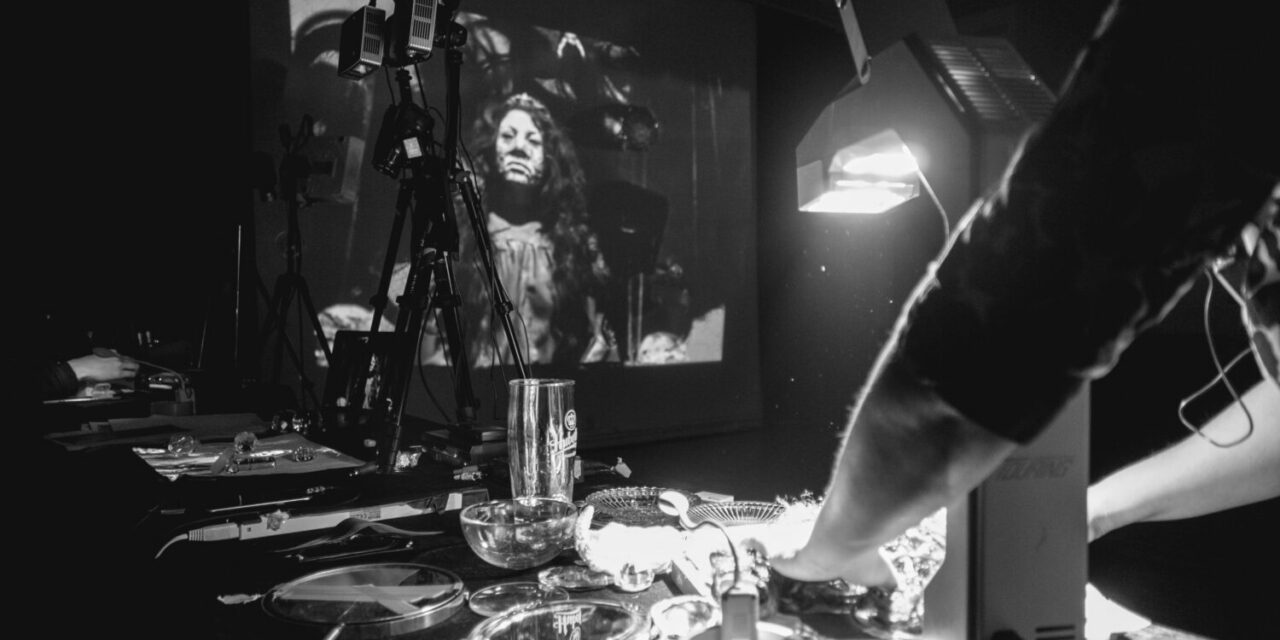 I didn’t know what to expect from the Telekinetic Assault Group. The name was aggressive and the venue, Punctum in Prague’s working-class Žižkov neighborhood, was unmarked from the outside, and inside looked like a hostel bar. I was there because I was intrigued by the description on the Prague Quadrennial website:

“With the help of visual collage, projection, and a new soundtrack, TAG reinterprets the B horror film Santo vs. The Vampire Women in real time. The result is an audiovisual ritual, in which immediate reality mingles with fiction as the noir atmosphere of the supernatural film infiltrates the theatre space.”

Santo vs. las Mujeres Vampiro or Santo vs. The Vampire Women is a classic Mexican horror flick from 1962 featuring mesmerizingly beautiful women, a mad professor and a luchador – a masked wrestler. I probably would have shown up just for a screening of this gem. Seeing how a contemporary artist would reimagine it was icing.

Telekinetic Assault Group is Cristina Maldonado, a Prague-based artist from Mexico, and musician/dramaturg Jára Tarnovski. Their set-up is simple: a large screen projecting the film and, on either side, their lo-fi laboratories. Tarnovski composed an original soundtrack for the film, a loopy, codeine-laced track which he plays on an army of moog-y machines. Maldonado’s equipment is simpler. She had a projector that allows her to interact with the film and insert various materials – a red filter, a crystal candy dish, a wig, some lace, her own self. It was like shadow-theater at the drive-in. There were a couple of flies that happened to be buzzing around the venue, and when they crossed the path of the projector, they would appear larger-than-life on the screen, a well-timed accident.

The performance was an interaction with the film, as Maldonado and Tarnovski took inspiration from its themes, sounds, and images, and brought them to life. In a funny way, using their low-tech equipment, they made it into a real 3-D experience. We didn’t watch the whole film, only certain scenes that really invited this kind of interaction, mostly involving the vampire women, shape-shifters who transform from hideous hags into seductive queens of the night. In one fantastic sequence, two of these vampires go to a nightclub on the hunt for fresh victims. As they sat at a table and eyed the room, Maldonado projected herself into the scene, taking drinks off the table, whispering into their ears, holding up a mirror to reveal their true appearance.

Oftentimes Maldonado would distort the image on the screen, putting her fingers in front of the projection to scrunch it up, or a piece of paper to heighten the effect when one of the vampires was set on fire. But sometimes she put herself through the wringer. She rolled on the floor wearing a small mask that covered her eyes with the eyes of the actress, which were too large and too dramatic for her face but somehow made her resemble semi-celebrity chef Carla Lalli Music. The creepiest bit was when she held up a small video of her own mouth over her mouth telling a pre-recorded story about encountering the smell of death on the tram. Her face participated in the story-telling, and it was like she was lip-syncing to herself. 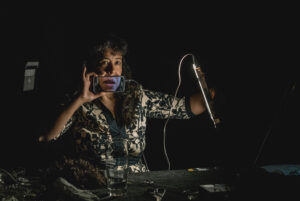 There are all kinds of ways to pay tribute to a beloved film. You could adapt it into a Broadway musical, or reshoot it shot-for-shot Gus Van Sant style, or make your boyfriend dress up as Margot and Richie Tenenbaum with you for Halloween. What Maldonado and Tarnovski do, though, is unlike anything I’ve ever seen. They take the film not as a finished product, but as one of many artistic materials at their disposal. By today’s horror standards, Santo vs. las Mujeres Vampiro is pure camp, but Telekinetic Assault Group returned its eerie otherworldliness while maintaining the humor. They took some fluff and gave it back its substance. It’s not the Mystery Science Theater treatment; it’s reverence.