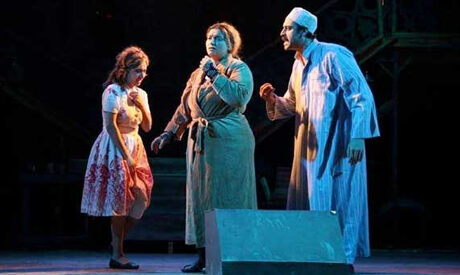 This polyphonic novel has been successfully adapted for the small screen in 2016, through television series screened during Ramadan, directed by Mohamed Yassine and with a script by Nashwa Zayed.

This time the theatre director Youssef El-Mansour offers his take of the novel with performances that took place at Cairo’s Al-Ayem theater. Presented by the Youth Theatre troupe, the play has premiered in January 2020 and has returned to the stages in August.

The story of Wedding Song is about the life of a troupe in a theater in the Al-Qobba neighborhood (hence Arabic of the book Afrah Al Qobba which literary means Weddings of the Qobba) neighborhood.

Sarhan, the producer and owner of the fictitious theater, offers the actors a new text written by Abbas, son of the prompter, Karam Younes. The actors discover that the play they are about to perform traces their own lives on stage as it reveals their secrets, their intimate relationships, and their scandals.

In the play, Abbas questions the deeds and morals of all members of the troupe including his own parents (Halima and Younes). He even suggests that he killed his wife Taheya, the former lover of a comedian from the Tarek Ramadan troupe.

In his novel, Naguib Mahfouz underlines the degradation of moral values ​​in Egyptian society between 1948 and 1970. He especially denounces the policy of economic openness and nepotism under Sadat.

Mahfouz’s work did not receive much success at the time of its publishing. Not only was the topic challenging for the political environment, but also the work introduced a new style for the Egyptian readers whereas the same story is told, from four different points of view: the actor Tarek Ramadan, the playwright Abbas Karam Younes, the prompter Karam Younes and his wife, Halima. From Television to Theatre

In the TV series that aired during Ramadan four years ago, Mahfouz’s story was extended, many characters have been added, offering great richness to the work, so as to allow the events to fil the 30 episodes aired throughout one month.

The TV series gave new impetus to Mahfouz’s text. “It was a big challenge for me to do a theatrical adaptation of this novel, especially after the success of the series. The comparison is inevitable. But I believe that this novel carries elements that are suitable for the theatrical form. The story itself takes place in a theater, so it’s a privilege to present it on stage. The suspense of Taheya’s death and the secrets that unfold require theatrical focus. To better satisfy the audience, it is better to present them with answers and solve the intrigue and suspense in one evening,” comments Youssef El-Mansour.

In fact, in the TV series, several characters were developed. For example, Taheya, Tarek’s former lover and Abbas’s wife, wanted to break away from the surrounding of the reality by playing different roles on the stage. Through performing, she defies her fate, having been born in a destitute environment where debauchery reigns.

In the original work, the description of Taheya does not exceed a few sentences, while in the theatre she takes the lion’s share of the script. She is described as a young girl who left her hometown during the war and lost her younger sister to the bombings. The director portrays her as a loving woman who gives herself entirely to her beloved, Tarek, yet due to a series of misunderstandings between the two, the couple splits up.

Unlike the television series, the theatrical version opted for a compact dramatic performance based on the novel’s four main characters. El-Mansour even deleted a few characters and added two others capable of adding a light comic spirit.

“I wanted to keep the polyphony of the novel and I wanted to respect the main characters and their points of view,” the director explains.

The scenographer, Amr Al-Ashraf, created a rather sober entourage, yet rich in symbols. With lights stressing on chiaroscuro, the theater without curtains easily becomes the home of Karam Younes. Add to that the elaborate choreography by Monadel Antar.

Instead of the narrative stories, known to the novel and the television opera, the director has developed new speeches and monologues, and through them introduced the characters’ transformations, moving from one state of mind to another. The actors excel at embodying these changes. Aging Karam Younes recounts his debut in the theater and his love at first sight for Halima. In one scene, he takes off his coat and moves on to another phase of his life, standing face to face with his mother, a low-level prostitute. Then he changes to the role of the deceived husband, then to that of a game leader in his house, then to that of the demanding father.

Same regarding Tarek Ramadan who moves from being the lover to the jealous man, to the confused man, etc.

However, this rule of adopting the many changes is not that obvious in the case of the Halima and Abbas. The latter appears as a child, then as a teenager, and then as a young man, each time played by a different actor. Halima is also played by two actresses: one in her youth and the other in her middle age.

The play of the theater in the theater adds a unique rhythm to the play. In addition, it allows the director to avoid a classic narrative approach. Halima and Karam, seated among the audience, intervene directly on stage, and present their views on their son’s story.

After presenting the different points of view, in order to solve the mystery of the death of Taheya, the director chooses a heartbreaking ending.

“By juxtaposing the points of view of the characters, Naguib Mahfouz left us hungry with an open ending. He didn’t want to decide: either Taheya’s death was caused by typhoid, or she was killed by her husband. In the television series, everything is revealed at the end. I also wanted to answer the audience’s questions and come up with a satisfying ending,” the director explains.

With that, the final scene in the play unveils the confession of the manipulations of all the comedians, including Sarhan, the owner of the theater, who has orchestrated many events of the troupe of Al-Qobba theatre.

Through his actions, Sarhan wants to get rid of all the people who know his weaknesses, as he talks about his plot and being the only triumphant person in theatre and one who can create a new troupe.

The ending is definitely disturbing and mischievous. This article was originally posted on Arham Online on September 10, 2020 and has been reposted with permission. To read the original article, click here.