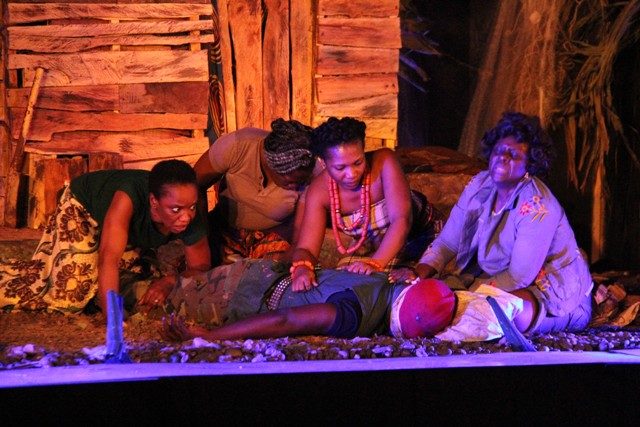 March 8th is celebrated world over as the UN International Women’s Day, and over the years, the month of March has become symbolic with celebrating women. In line with this month of eulogies for the women folk, the Niger Delta Development Commission did a drama tour in four locations in the country with the play Little Drops by Ahmed Yerima.

This year’s theme for International Women’s Day is ‘Pledging for Parity’, and this movement has gathered thousands of signatures across the world. Before each command of the play in Abuja, Port Harcourt, Benin and Calabar, members of the audience were urged to add their signatures to the #IPledgeForParity movement. And they complied; male and female alike, young and old. The NDDC’s mandate is to facilitate sustainable development in the Niger Delta, and as Mrs Ibim Semenitari, MD of NDDC said, working together as partners is a message that she reaffirms, as the region is too important to be neglected and “Virtue can only flourish among equals.” 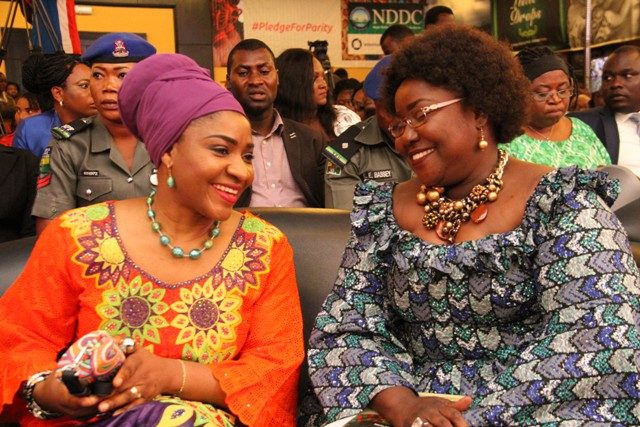 Little Drops captures on stage the torment, the bruises and malcontent inherent in the Niger Delta region. This sometimes painful, yet deeply engaging narrative is woven through the experiences of four women. These are women who have known helplessness, have tasted the trauma of loss in the conflict-ridden Niger Delta, still they forge on— indeed these are women we can relate to, for the air they breathe is the same as ours. In the words of Mrs Seminitari, these issues are “a constant narrative in national discourse, demanding and requiring healing. We must also begin to think more on helping to rebuild the lives of women and children who are unscripted victims of the conflicts in the Niger Delta.”

The play opens at an embattled waterside, with a war-ravaged Mukume (Najite Dede) running from rebels, into what she presumes is another male tormentor. She begs for mercy and pleads not to be raped in the ensuing exchange and my heart goes out to her, for this does not seem like a fight she can win. When her assailant demands from her ‘Why? You think you’re too good for me eh?’ Mukume responds, ‘No, I’ve been raped three times already today…’

This exchange feels strongly symbolic of the rape and plunder of the Niger Delta, by those whom her lands and waters have nurtured and fed for decades. 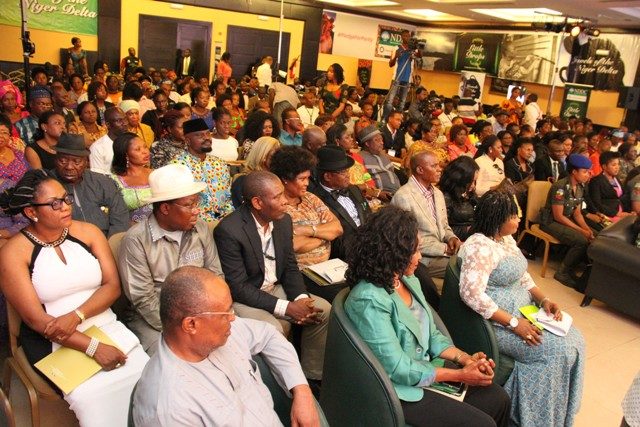 We soon find out in the play that Mukume’s attacker is no tormentor at all- the attacker is Mama Mememkize (Tosan Ugbeye), mother to all who stumble to her riverside home, the ever watchful hawk who speaks of the war in which she lost her sons and husband: “Why they fought this war, who won this war, I do not know. What I do know, is that my losses are real”.

After having scared her with a giant spoon disguised and clothed to resemble a gun, it is Memekize who tends Mukume’s wounds- praying with reverence to Mary mother of Jesus and then immediately turning to Benikrukru, goddess of the river, she pleads “Let the whiteness of the sea goddess be hers, come and make her your own!”

The psychological effects of rape are captured vividly on the stage and by reflex, the collective sighs and shaking of heads go on in the audience. The plunder does not end in rape, there are murders, including that of the king, and shellings that claim scores of innocent lives. The land is at war, with its young men splitting into factions of rebel groups, with each group claiming to be fighting for the improvement of the Niger Delta region.

We meet Azwe (played by Zara Udofia Ejoh), the young queen of the land, who runs from the palace incognito after her husband is felled by rebels shortly after they share his meal. But Azwe’s trauma is not complete, not until the crown prince strapped to her back is found dead – with a stomach “full with the lead of death…” as Memekize says. In little drops of blood, his life had been seeping away.

Our fourth female character is Bonuwo, (played by Joke Sylva) a teacher who is also caught up in the war after losing her 44 pupils to a bomb, and pursued away from a town that once saw her as a messiah come to bring enlightenment to their children.

A worthy lesson is learnt from this play; all of these women’s pains and troubles is soothed with some infectious humour and a tot or two of hot drink. Local gin also known as Sapele water is an all round elixir. it is tincture and antacid and relaxant. 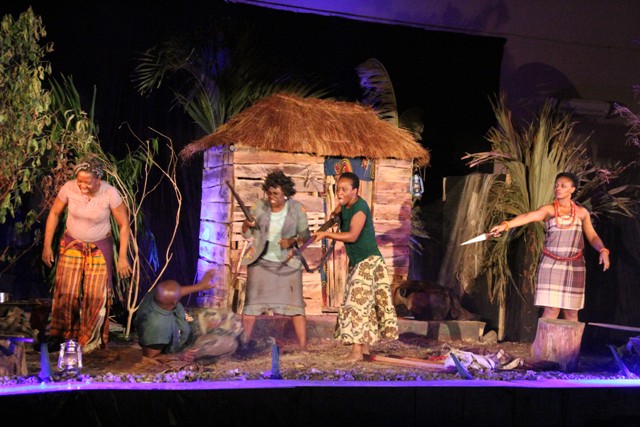 The male characters are implicated in this piece in ways that leave little room for doubt of their complicity in the state of the Niger Delta. Ovievie (Mukume’s runaway groom) is a rebel leader whose opponents attack his wedding night and take turns desecrating his bride’s virtue – after he has run and left her behind of course.

We meet another rebel leader Kuru from Gbaramatu kingdom (played by Toritseju Ejoh), who disregards Memekize’s dignified grey hair and stoop, who ignores the queen’s royal majesty and even the honour of his teacher from way back; all in the heat of rebellion. According to him “when you wear a hood and carry a gun, your blood boils, you are not of this world.”

The play raises many pertinent questions, questions which are inescapable when talking about the problems of the Niger Delta: How long will the people of this region suffer irreparable damage to their means of livelihood and their psyche? If really the militants fight for the development of the region, why do they destroy and vandalise? Why the kidnappings? Where do they keep the money gotten from these illicit activities? Does it go into a few individual pockets or is it used for the good of the land?

In the words of teacher Karamo, “perhaps the mothers too have a hand in this … perhaps we let them play too much by the sand, made them believe the world is easy…” 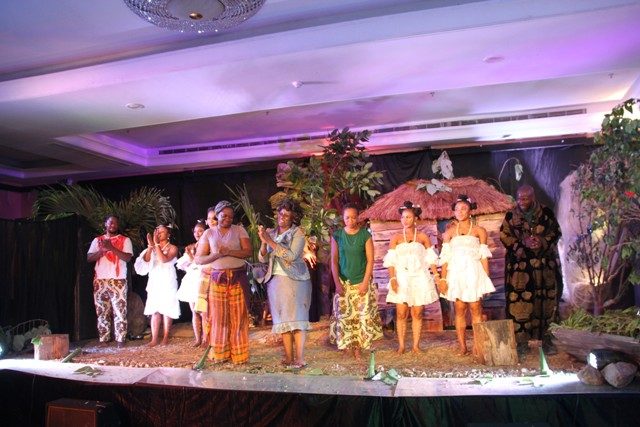 As a celebration of women’s month, it is surely no coincidence that the female characters in this play represent the elderly, royalty, youth and guidance and instruction embodied in a teacher. There must be symbolism in the choice of characters; women of all ages and strata of society suffer when the land boils, just in the same way these women can each contribute her bit to improve the situation of things around her. This strongly echoed Mrs Ibim Semenitari earlier words when she said that women more and more have shown a great capacity to drive the course of development, holding society by the scruff of the neck and demanding to be taken seriously.

One cannot end this without calling to mind the words of the special guest of honour, the wife of the governor of Cross River state Dr (Mrs) Linda Ukwuye Ayade in her opening speech. she urged women to resist the negative traditions which tie them down and expressed her wish that women would be at par with the other gender(this raised general applause within the audience). But Mrs Iyade spoke not necessarily of unhealthy competition, but of a condition where women are goal oriented, setting the right goals and not letting initial failure limit their striving. “The challenges are huge,” she said, “But what to do is keep trying. As Einstein said, ‘The woman who follows the crowd, will stop where the crowd stops, but the woman who goes on her own will find herself where no one else goes’”

Ahmed Yerima has indeed written another masterpiece in Little Drops, and Niji Akanni’s directing skills brought this to the fore. One can only hope that more bodies and corporate entities would emulate the commitment of the NDDC to encourage the arts through specific campaigns that aim to improve human capacity.

This article was first published on Olisa.TV. Reposted with permission. Read the original article here. 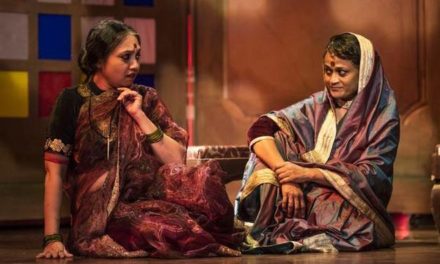