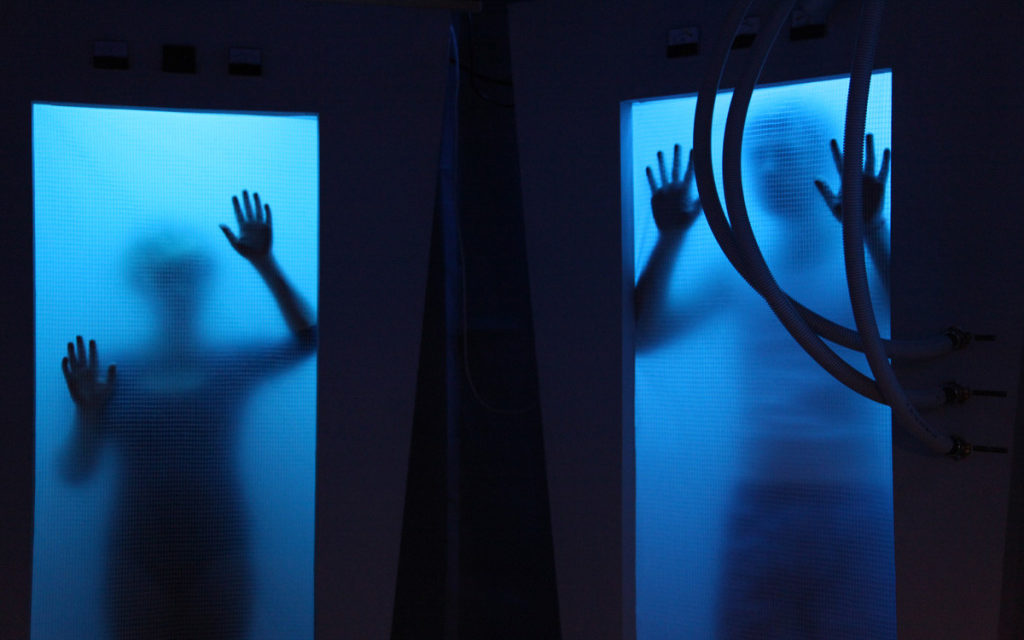 machina eX is one of the most immersive theatre company in Germany. They constantly recreate surrounding of video games where the audience can experience how is to be a real protagonist of such games. Interview with machina eX’s member, Lasse Marburg.

What is exactly your background?

I studied in Hildesheim, with all of the people with whom I did our first game. We came from different specialties and directions but we found out at the university that we had this common thing in our mind and then we applied it in practice. We had eight weeks to really work on this format that we still use in variations. But the idea to work together pretty much came up with by two of the people. The story is that Laura Shaeffer, who is in America now unfortunately, she wanted to play a real computer game. She searched something like Super Mario but for real, as a birthday present. She couldn’t find anything similar, but she thought that it would make so much sense to play a real computer game so she started to figure it out.

The university has a focus on theatre and on games studies as well, so we came together at the game study classes and developed some technical expertise. Me personally I studied humanities, but from teachers with background in dramaturgy and I also added a little bit of information science, some programming and we had a workshop on media programming, too. This was also where we started to think about it, how can we use this in staging, how interesting is to have interactive media staff in the staging. 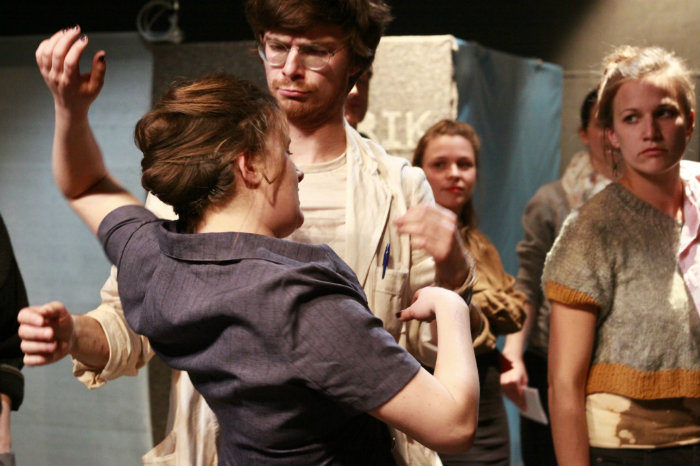 And then, you found each other?

So we’ve met at this self-made tech workshops, we also invited other friends who were interested in it and had different talents, Laura Nauman, for example she was already writing the pieces. We had a circle of guys having a kind of expertise in craftmanships, but still very open people for ideas.

What was your first project?

It was called Maurice. It was a site-specific project but we were making up the scene very realistic. This eight weeks meant: working on the format, checking how can this work, testing the place of acting and building devices to make it like a real computer game.

Mainly you are the programmer?

What is your relationship with performing/acting? I just saw you in the Right of Passage, one of the latest machina eX production.

Actually, this is the only performance where I am also acting. Before I did some acting stuff, but not too much. Performing in the machina eX is like being a computer program because you have to listen to events, it is not only about following the line, you always have to be aware of what is going around you, but that is still systematical. The better the system, the better the improvisation part is. In the first place, my role is to be like an information point. People come to me and I give them information. But of course, the system is about that you have to follow the rules. It’s more learning rules of the game so you communicate for the people how the rules are. In other performance is much clearer: people come in and something there is made up. For example, you can see that you “are” in a restaurant by the surrounding what is supposed to be: there is an actor, who is playing the scene and every actor knows what she needs to do. After a while, the actor is stuck and is always repeating the same problem with variations, for example “where is my purse?” “Hmm, I can’t find my purse” – that is the problem and people can recognize the problem and they have to do something or there is an event that has to be done. You have to do what is communicated, you have to act the problem so people can get it.

How big is now the core group of machina eX?

Eight people but there are several people who are working with us sometimes, and some who are working project based. In the beginning we were all involved in all projects. Now it’s more that we split up the people from the core group, and they work with other people and we do two projects at the same time. It’s pretty crazy to do that. The group is like a family, you get problems, but now we work in other constellation, everybody gets to say more, there is space and you can make new stuff that is pretty cool.

How was your path recognized by the founders, how do you see this process that your genre was recognized as an outstanding artistic production?

Actually, I was so much into the engineering staff, that I recognized very late, only afterward that we made a pretty big jump in some month. In Hildesheim after our first production, we had to throw everything away and very few people have seen our production. But everybody liked it. After that, we made a smaller project 15.000 Gray, and we played it 120 times. We made it in two weeks, and we didn’t think that it would be complete, that people will think that it is a play for itself or that it represents something. We played in for example in 100 Grad Festival, and after that Matthias Lilienthal (ex-director of Hebbel am Ufer Theater) was pushing it and we were invited to Impulse Festival. People started to tell us, “hey this is interesting.” The words like game and theatre matched, nobody knew what does it mean, but at the end some people said, ah this worked.

I also saw on your website that you have a so-called browser game: can you tell me more about the 15000 Shades of Grey?

The Shades of Grey is a computer game, with the bomb and the professor. We took a very basic computer narrative: the bomb, you have to stop it, the world is gonna end if you don’t stop the evil guy, so everybody knows what to do, nobody is arguing about it. A lot of computer games are working like that. They don’t put too much effort in writing complete scenes and characters. We could really show how the game works, when we were there, in the scene talking to the other players, arguing what to do …We didn’t write a complex stuff, that somebody had to understand.

So it’s like you are putting the interactive technique in the space, but you are also doing application or installation?

I would call it more as a game installation: you are in the environment the only thing that is missing are the people, the actors. So in this case, is more like a computer game ‘cause there is a computer in the background but you are not playing with those boring devices, but with other things like telephones. Because we do that as well. But I find it not so far from putting actors there. Still is theatrical because there is a social situation. The situation for the players are pretty similar if you are in the room only with light and sound interaction – it’s like solving a problem.to see who is the leader, who is just watching, or just doing things that doesn’t change too much about it. It’s like a basic element of our stuff, which is always the same.

How are you designing a game?

It is always the problem that for whom do you make it: for the person who plays it….If you make something like that is still education. I mean do it, better do a bad game about migration then not do an interesting game, or a politically influencing game. It is a lot about research: if you have really researched, you will find a way to make things. There are some pretty cool games, for example, Papers, please. Games are more about systems and friends, it is not so much about telling stories….of course, it is, but then maybe you have to make a film or documentary. And how are we aiming to create a realistic context? It is important to choose the right color, to have the right setup, to have customs. In our case, that was more coming from the game area. We are trying to make different stuff with a real environment.

For example, I saw in the Right of Passage: your context was the migrant issue.

The content is being in this situation as a migrant, but the problem is to be stuck in this bureaucratic system. The narration is about the camp, but the game is about the system: the bureaucracy being just working for itself, and you can’t even make up who is responsible but it is there and everything depends on your paper which is randomly given to you. We sense this problematic gap between the two things.

Your main ideas were primarily about presenting the bureaucratic processes, and after that the migration.

Yes. The migration topic is also an application thing, so if you write the application with this topic, you will get it. We cannot do anything, so we cannot beat anybody (just to be more realistic) but as a participant you can do anything. This is also an agreement, it is not that complicated, in this case it is that I need these stamps, and I want to get it, they made it harder for me. It is very hard to accomplish. One or two persons per evening can accomplish it. We didn’t want to tell that it is possible: if you really really work and you are lucky, too then you can make it.

How long does it take to set up?

What do you have to install here?

The alarm doesn’t take too much time. But it is good that you didn’t see the rest, hanging the lights etc. The telephone, were you get your birthday certificate, they had to call the embassy. If you want to get the press…The biggest part is the wiring, there is so much wire. I think if we would make it right, we could save a day, just by putting in a track.

You mentioned in an interview that you already feel, that some people are going to plagiarize your work?

There is stuff coming up, of course, making games in real environment…in a way, it is totally natural ‘cause there is so much to do. I always think we can’t make all, I have so many ideas. But I think that it is natural. Sometimes you think, that “Oh, we should have had done it, ‘cause we also had the idea” but that is totally normal. For example, there is this escape room community, which I find very cool, but five years ago we were also thinking that let’s have a house and build it over and over. So this is not a plagiarization, it is natural to come up with. It’s a global idea to use games to make really cool stuff. 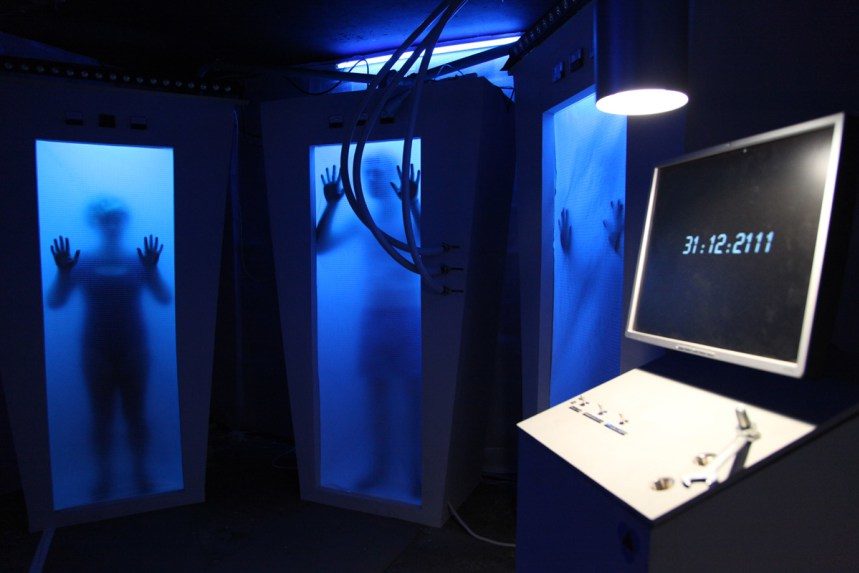 This interview was originally posted on Zip-Scene.com. Reposted with permission. Read the original article. 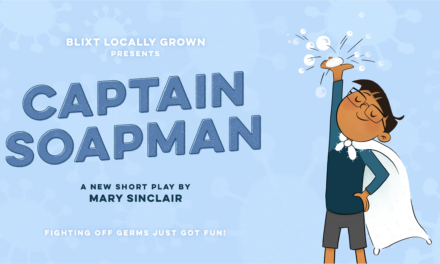 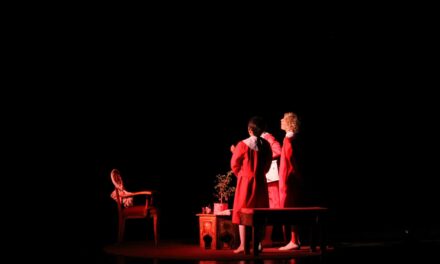