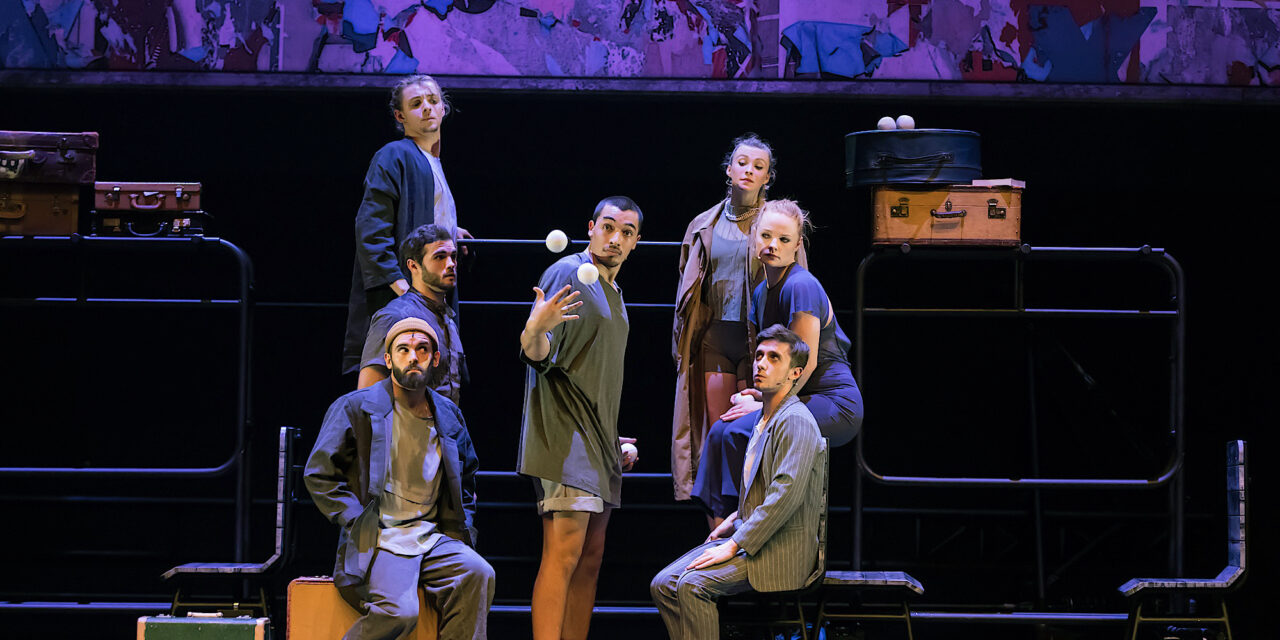 A train may no longer be the most novel mode of transportation, and yet it remains a powerful metaphor for human life. In their upcoming three week-long engagement at the Cutler Majestic Theatre, circus troupe 7 FINGERS embraces the train symbolism and invites us on a ride through beauty, doubt, emotions, and towards the undeniability of human connection. Two of the 7 FINGERS performers Sabine Van Rensburg and Brin Schoellkopf shared their thoughts apropos their new show PASSENGERS with The Theatre Times.

Irina Yakubovskaya: When people hear the name 7 FINGERS, they probably get confused. Is this ambiguity part of the concept of your circus company?

Sabine Van Rensburg: The title of the company comes from a French expression “Les sept doigts de la main” which means “seven fingers of the hand.” It means “a group of people who form a very close community.” The company was founded by seven very close friends, they formed a collective, and the name of the company reflects that.

Brin Schoellkopf: This company started about seventeen years ago, so they were all circus performers themselves and had their careers in various companies. They wanted to do a show together, where they [the founders] performed, choreographed, and directed everything. After that, they decided to evolve the show into a company 7 FINGERS/7 DOIGTS.

Sabine: We recently graduated the Circus School in Montreal, so this is our first professional engagement. This company is very family-like, and they care for the artists and their long-term careers.

IY: Nostalgia seems to be a major theme in PASSENGERS. Does the concept or experience of nostalgia resonate with you?

Sabine: In the context of this show, nostalgia for me resonates as the ability to remind the audience members of their own experiences and have them re-reflect or relive their personal experiences through watching us [perform]. For me personally what triggered nostalgia was when on certain days, during the creation of the show, I remembered moments of saying goodbye to my family in South Africa where I’m from, as I went away to pursue my dream. These are the topics we touch on: the reasons for leaving, the reasons to go somewhere… I’ve lived that, Brin has lived that.

Brin: In general, circus performers are always traveling the world, so we are all experiencing it. There is always nostalgia. I have very specific moments of my life that I remember which spark a feeling during a specific scene. Everyone has a relationship to traveling, whether locally or globally. The reason the show is so special so that it is relatable to everyone in some way. It depends how open each audience member is, how much they want to reflect on their own experiences. The show is like a tool to spark people’s memories. We took our time to talk about the experiences of traveling that we had, and to play on themes of traveling and interacting with people.

Sabine: I also think we really focus on the human connection, meeting people on your journey of life, whether on a train or not, and then having to say goodbye to those people, whether lost in death or in distance. Even if you have never taken a train in your life, the train is your life metaphor.

Brin: Even if you decided to take a metro to work, and then to have a conversation with someone there for some reason, those are specific moments you remember for years even if you never see the person again. It takes you out of your daily routine. For those who don’t have a lot of experience with travel, our show could maybe motivate them to do something they’ve been wanting to do their whole life. They might drop everything and just go.

IY: Nowadays, taking a metro/subway often means witnessing people glued to their phone screens. How does the show engage with the challenging question about the role of technology in human lives?

Sabine: This is a big question. On a specific level, there is a scene in the show where a character changes two people’s lives by taking away a distraction and making them face each other. This is a reminder to look up from a screen a make a connection. The question of the role of live circus in society is a bigger topic…

Brin: I think that nowadays often when we perform, we see phones in front of faces. I think “Why are you buying a ticket if you are not going to experience it? I know you are never going to watch that [footage].” It’s crazy to think how fast the world is changing. For me, what’s special about performance, or coming to the theatre – it is different from your reality and what you do every day. Maybe this show is a reminder to wake up.

Sabine: It is almost like a competition [with phones and cameras]. We need to maintain the interest of the audience. I always fight for the real-life human connection. When I see a screen, it lights a fire and I push even harder.

Brin: I make the eye-contact that says “No, don’t do this!”

IY: What are the biggest challenges and rewards of creating and performing in multicultural environments?

Sabine: The different cultures in terms of applause are interesting. In Moscow, they buy flowers before the show, and they choose their favorite performer and give flowers to them. They also know your name from the program, and they call you by name at the curtain call. In Montreal, it’s always a standing ovation, but the applause is short. In France, they do a rhythmic applause, and nine callbacks at times.

Brin: For me the special part of it is that every culture experiences this show so differently. The first place we went to after Montreal was Russia, and it was such a complete change. In Montreal, we were performing for friends, and coming out of school it was more about your ego and wanting to impress the people you know. As soon as we went to Moscow, I felt differently, I realized [we performed] not for us but for these people who mostly never experienced something like this. Russia of course is very appreciative of the arts, but still contemporary circus specifically is not that common [there]. Even people we collaborated with [in Russia] told us “You don’t even realize how impactful this is.” Even if it’s just two guys holding hands on stage… It’s the little things that we don’t think about, we take for granted, especially in Canada and in the arts community where we all are comfortable with each other. This has been my eye-opener.

Brin and Sabine: We are very excited to come to Boston, we’ve heard amazing things about how welcoming the community is! 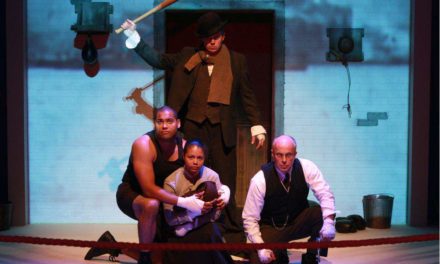 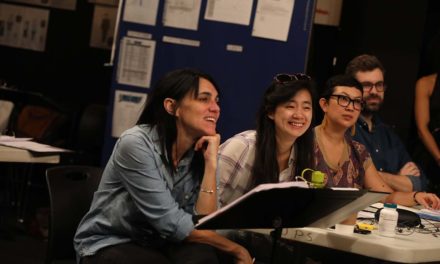