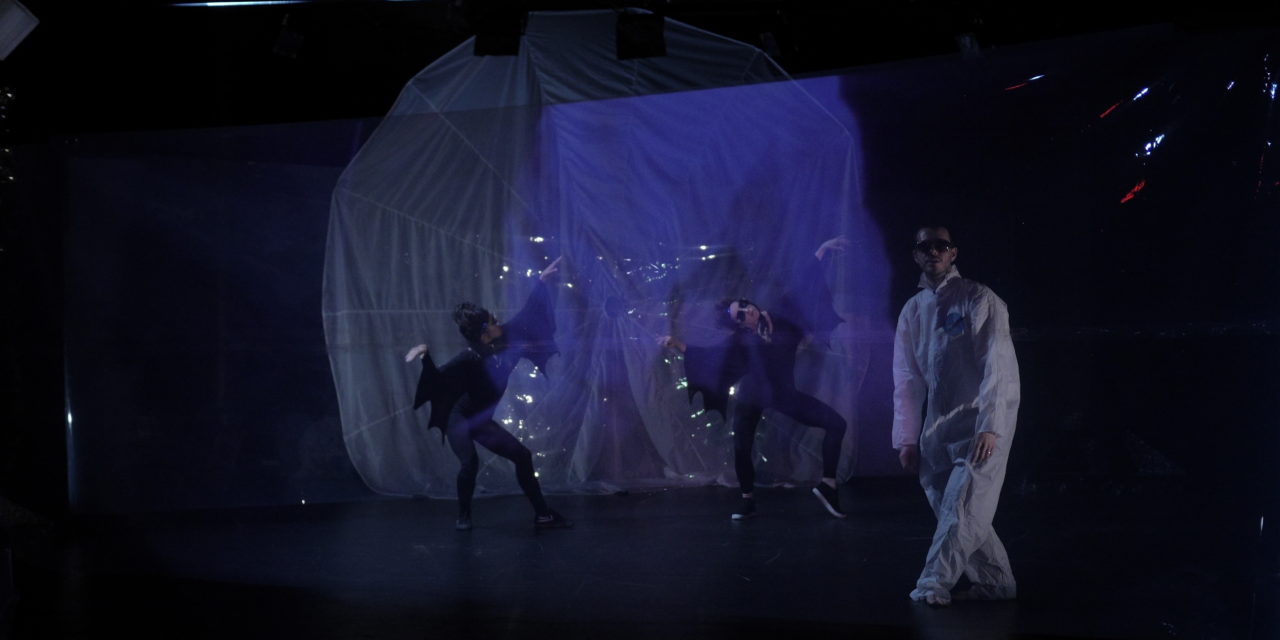 Downtown theater pioneer the New Ohio Theatre has emerged with its annual summer festival called the Ice Factory. The festival has hosted dozens of noteworthy theater companies over its tenure, including Elevator Repair Service, guest curator of a visionary production by the Saint Fortune Collective called One Small Step.

Saint Fortune is an omnibus ensemble which was created in Rochester, New York before later relocating to New York City. In addition to actors, their members include designers, dancers, and filmmakers. One Small Step is thus a suitably multi-dimensional performance featuring a small video monitor downstage right, various film projections, several layers of transparent screens to delineate different tableaux in the production, and performers as equally adept at playing instruments as they are at dancing.

The production commences with the three main characters, two men, and one woman, moving in a sleek, angular pattern diagonally across the stage behind one of the plastic screens. The performers then proceed to decamp downstage left to fiddle with a series of important-looking electronic devices. The fact of them hunkering down in a far corner of the stage for several minutes tending to decidedly undramatic matters is oddly enticing. Credit is due the actors for moving with a clear sense of mission to help lure the audience into the mystery and magic evoked by the audio of moon landing excerpts that comprises much of the first half of the approximately 80 minute evening.

The actors next appear to resemble a sort of LSD-fueled recording session circa 1967, whether it be the Beatles in London or the Velvet Underground in New York at exactly the same time. It’s the sense of sartorial extravagance of the former mixed with the mystical power of the latter that evokes these musical parallels.

While the inspiration for the production and the moon landing in question is in fact 1969’s Apollo 11 space mission, the sense of 1960s magic is palpable in this first section. It’s as if Roxy Music-era Brian Eno had manned the boards for a long lost Velvet Underground recording session, so immersive is the unusually synergistic melding of vintage audio footage, moody lighting, and spare yet stylized movement.

Were the performance merely a laundry list of clever effects combined in an inventive manner, the show would be a diverting entertainment. That the performers seldom speak and the evening is thus largely non-narrative is remarkable, given the cumulative potency of One Small Step. The kaleidoscopic imagery that Saint Fortune throws up in One Small Step is so myriad that it is challenging to analyze when instead one wants to surrender reason and go on the journey that’s unraveling at the New Ohio.

Much credit belongs to director Gavin Price, also one of the performers. Emily Craver and Emily Pacilio also deserve merit for their choreography and likewise as performers. Video designer and performer John Gasper is a standout for his transportive visuals. The fifth remaining performer, Natalie Mack, also handles music. The show has much to recommend it with very little to quibble about.

Alas, the climax of the performance arrives a bit early with the moon landing approximately halfway in. The press release explains the mission of the production, that of an alternative historical exploration. A bit more detail in the program notes would’ve likely helped set the scene for the audience members.

The final segment, a monologue bereft of the ambient sound design, is one of the only moments where the text is spoken live, not a recording. This attempt to pare the various components away to best evoke a sense of immediacy, of urgency, is ultimately a letdown not likely envisioned by Saint Fortune.

There is simply so much essential adornment leading up to this dénouement that the too-bare stage cannot quite handle the sense of emotional heft such a stark mise en scéne demands. Since virtually all the preceding text is communicated either via non-verbal utterances by the actors or by found audio footage, it’s hard to imagine any text being sufficiently potent to live up to that sort of stripped-away scrutiny. That minor complaint, in addition to the sense that the second half could’ve been trimmed of a bit of inertia, does little to detract from a majestic evening of experimental theater that is unusually vibrant and engaging.

Saint Fortune’s influences evidently include guest curator Elevator Repair Service and while their modern theater antecedents are numerous, theirs is a creation that is enjoyable independent of the sort of drinking game of naming references indicative of lesser new works. While One Small Step is enjoying but a brief festival run, Saint Fortune’s fortunes are likely to result in more work by them in New York and hopefully soon.

One Small Step was presented at the New Ohio Theatre at 154 Christopher Street in New York City.