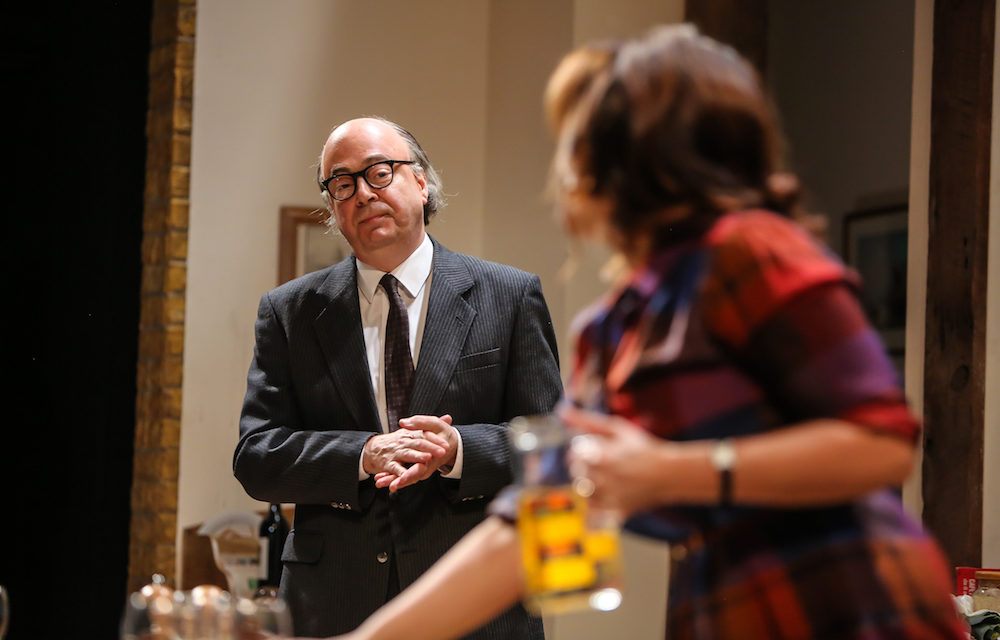 Politics is a serious business, but it’s also a fun spectator sport. Think of the duels in Prime Minister’s Questions or the marathon that is Brexit. It’s a place of cartoon villains (Corbyn), straight villains (Trump) and plain cartoons (Boris). But while the pace of events makes writing about the present rather perilous, the past is a happy hunting ground, an area full of stories that all seem to prove one depressing thing: that history repeats itself, the first time as tragedy, the second as farce.

Opening on Budget day, Steve Waters’s new play, Limehouse, at the Donmar is a delight for politics buffs. Set entirely in the kitchen of David Owen and his wife Debbie, an interior designer’s dream in an obscure but regenerated corner of Limehouse (there’s more than one joke about how hard it is to find this area of East London), the 105-minute play cleverly condenses the story of the foundation of the Social Democratic Party (SDP) in 1981. On the morning of Sunday, January 25, a group of senior right-wing Labour Party members — Owen, Roy Jenkins, Shirley William, and Bill Rodgers — meet in secret and split from the party to set up their own. If you don’t recognize these names, then there are three useful essays in the program that help to fill you in.

Known as the “Gang of Four,” their drastic move was a response to the success of left-wing militants within the Labour Party. The previous day the party — in opposition while an initially unpopular Margaret Thatcher was shrilly devastating the economy — had held a special conference at the Wembley Arena. As one left-wing measure followed another, the four were appalled and concluded that Labour could not be saved. Instead, they decided to create a new, alternative, party of the center left. It hardly needs saying that these events resonate with Labour’s current woes as several senior figures rebel against Jeremy Corbyn, who, like Michael Foot in 1981, is seen as an unelectable radical.

Limehouse is a highly intelligent account of the birth of the SDP. Of course, it summarizes weeks of discussions and decisions into one manageable meeting, suggesting that on the morning of that fateful Sunday there was all to play for. Waters characterizes his protagonists with great clarity. Owen is seen as the prime mover and shaker, manipulative and unpleasant, pushing and pushing his colleagues into making the split. Jenkins is a bon viveur and has-been (in another resonant moment he castigates the left for being against Europe), while MPs Williams and Rodgers express the pain of splitters whose whole lives had been defined by an intellectual and tribal allegiance to Labour.

Naturally, the tensions between political conviction and personal ambition take several walks around the kitchen, and there is plenty here about the history of the Labour movement. I particularly liked the passages in which Jenkins expounds on the importance of the Liberal contribution to center-left thought (Beveridge et al). Nor is the dodgy issue of class avoided. The conflicting priorities of working-class trade unionists and middle-class professionals are beautifully symbolized by Owen’s “bourgeois” home and his “bourgeois” profession as a doctor. The youngest of the group, he is also the most energetic and most underhand of them all. And he doesn’t really care, at one point admitting “There’s no friendship in politics.”

Waters also underlines the role of Debbie Owen, an American literary agent who not only supports her husband’s ambitions, but also tries to temper his hot-headed abruptness. As well as cooking up a macaroni-cheese bake (one of Delia’s), she is shown smoothing over the ruffled egos of the other three as the hot-headed Owen lets his passions get the better of him. She also gets to deliver an epilogue in which she briefly discusses what happened to Labour and the SDP, and this might help younger audience members get a handle on the significance of this historical episode. Since we know that the SDP signally failed to break the mold of British politics, with the first-past-the-post electoral system diluting the new party’s support, the protagonists carry with them the air of the deluded and the doomed. Knowing they will not succeed gives their aspirations a dose of dramatic irony.

There are several passages which are designed to have echoes today. At one point, Rodgers asks why Labour members “always hate our leaders,” and “Why this distaste for office as if power was somehow a betrayal?” Later, Jenkins’s characterization of politics as “wrangling, plotting, a thousand ephemeral gestures” sounds strangely familiar. While, at the end, Williams’s conclusion that “The Labour Party’s the house hope built for us” sounds particularly bleak given Corbyn’s leadership, and his constant undermining by his MPs.

Polly Findlay’s effective production, attractively designed by Alex Eales, features the projected image of a large electronic clock, which in the scene changes ticks down the minutes until the arrival of the press. Her cast is led by an energetic Tom Goodman-Hill as Owen, and features a super performance by Roger Allam as the lisping and pompous patrician Jenkins, who is more interested in wine (yes, Debbie has acquired a bottle of Chateau Lafitte) than press releases. Allam manages to infuse phrases such as “I am replete” with just the right amount of comic absurdity. Nathalie Armin brings out Debbie’s emotional intelligence, while Debra Gillett suggests some of the steel in Williams’s character. Paul Chahidi mixes physical comedy (Rodgers has a bad back) with that rare commodity: political sincerity. The result is a treat for politicos and those interested in mighty moments from the past, but for others the comedy of the piece might not be enough to outweigh its obscurity. If you don’t already know the story, you’ll definitely need to do your homework.