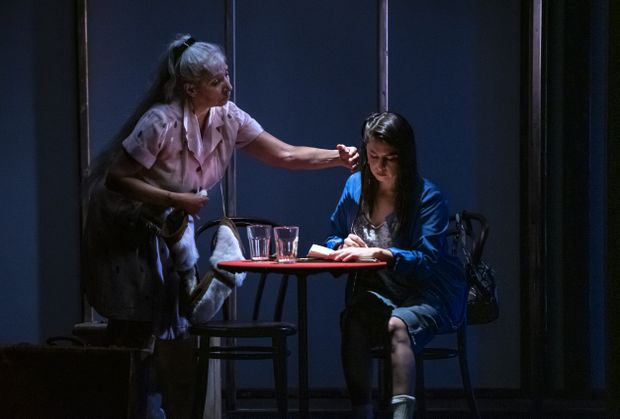 No two ways about it: Opening night of Marie Clements’ play The Unnatural and Accidental Women at the NAC was significant.

It marked the revival of a respected writer’s story about murdered Indigenous women that, including its premiere in 2000, has had only a couple of previous productions (yes, alarm bells did chime at that infrequency). More importantly, it was the first show in the inaugural season of NAC Indigenous Theatre, a much-anticipated landmark in Canadian theatre.

Expectation and goodwill had the audience buzzing on Friday.

Kevin Loring, the passionate artistic director of the new Indigenous theatre department, greeted us, as did Jillian Keiley, Loring’s counterpart in NAC English Theatre (the show is a co-production by the two departments).

Algonquin elder Annie Smith St. Georges, who’s been welcoming NAC English Theatre audiences to traditional Algonquin Territory for some time, spoke before the show, concluding her introductory remarks by saying, “Miigwech, and have a great time.”

And there’s the rub.

Despite the reputation of its Métis-Dene writer, its large cast (13), its ambitious design (two levels of performance space, projections, recorded music, all of it signalling occasion and, ultimately, a celebration of Indigenous women’s strength and resilience), its important subject matter, and its intermittently riveting nature, the play is too fractured, busy and self-conscious to be anything approaching great.

The story Clements presents is at once horrific and affirming.

Over two decades, starting in the mid-1960s, Gilbert Paul Jordan murdered Indigenous women on Vancouver’s notorious Downtown Eastside by forcing them to drink so much that they died of alcohol poisoning. The women were accorded little attention by police, coroners or the media, while Jordan, a barber, was. Clements’ play sets out to right that wrong by making Jordan almost a bit player in the saga and, instead, presenting us with flesh-and-blood women — mothers, sisters, daughters whose isolation from their distant homes were part of their downfall.

Clements frames it as a ghost story set in motion by a daughter’s search for her vanished mother. PJ Prudat, an actor whose clarity of purpose is matched by her clearness of voice, plays the daughter, Rebecca, while her mother, Aunt Shadie, is depicted by Monique Mojica, a performer of singular presence.

As the story progresses in almost hallucinatory fashion, with distinctions between place and time virtually erased just as the sweep of colonialism attempted to erase First Nations people, the ghosts of women murdered by Jordan reveal their lives.

At first, each is in her own hotel room on the second story of Andy Moro’s set, with Jordan’s barbershop and a bar on the main level. The women don’t speak to each other, instead playing out their own versions of misery and hope.

In a funny/disquieting scene, Valerie (Yolanda Bonnell) has an argument with a piece of furniture that makes obscene comments to her.

Another, the self-possessed Mavis (Columpa C. Bobb), keeps trying to connect with people back home by phone but reaches only answering machines (remember, the play was written 20 years ago). “All I want is a good laugh,” she says at one point — not too much to ask for in a human life.

As the play progresses, the ghost women begin interacting even as Jordan (played by Pierre Brault, who does much with a character with no discernible back story or motivation for what he does) kills their living selves.

Ultimately, it is the women who triumph, their strength and bonds celebrated, under director Muriel Miguel and choreographer Penny Couchie, in two electrifying dances.

One of the dances occurs at the end of the first act, and we had been told by Loring in his introductory remarks to return after intermission. Turns out that some audience members at the previews, apparently thinking the play had ended, did not return after that first dance. Audiences at a well-constructed play don’t need to be told when it’s over.

Much of the problem with The Unnatural and Accidental Women is its fragmentary nature. In the first act especially, we get snippets of projections, tableaux of the women in their hotel rooms, loosely connected scenes involving Jordan or Aunt Shadie or Rebecca. That may be consistent with Clements’ surrealist vision and a reflection of the women’s shattered lives, but it winds up simply feeling fractured, making both characters and play tough to connect with emotionally.

How different that is alongside the visceral strength of something like Corey Payette’s Children of God, about residential schools, that played the NAC in 2017 or even Clements’ own taut The Edward Curtis Project, which the Great Canadian Theatre Company mounted in 2013.

There are also stretches of dialogue that, while waxing poetic, are not compelling and do little to inform the story, despite the actors’ skills and commitment. While you might be able to abide such stuff in a shorter piece, the play’s bloated, almost three-hour running time makes them a chore.

All this left me, for one, feeling largely unmoved and wondering how much better the play might have been had Clements simply taken a red pen to her script.

This article was originally published in Capital Critics Circle by Patrick Langston on September 15, 2019, and has been reposted with permission.