“My Country; A Work in Progress” – The First Brexit Play at the National Theatre 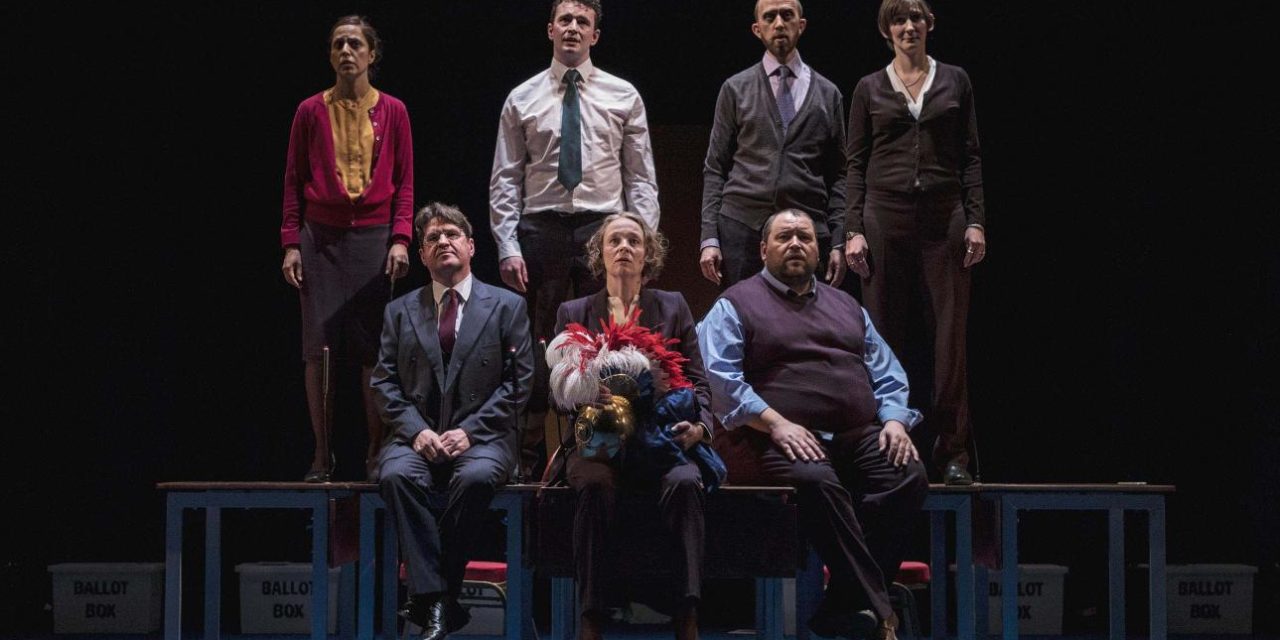 "My Country; A Work in Progress." Photo credit Sarah Lee

Oh dear. The first play explicitly about Brexit is being staged by the National Theatre in a production that has all the acrid flavour of virtue signalling. It is well known that in the wake of the referendum vote to Leave the European Union on 23 June last year, shock waves affected artists all over the nation. Many felt that the decision was a loss — like a bereavement. For some reason, Rufus Norris, artistic director of the National Theatre, decided that his theatre should “listen to the people” — as if we didn’t already know what people around the country were, and are, thinking. I mean, doesn’t he listen to the news? Or watch documentaries? It’s not as if the Leave campaign was carried out in secret!

Anyway, the result of this “listen to the people” project — so reminiscent of the feeblest of Labour Party ventures — is My Country; A Work in Progress (in the words of people across the UK and Carol Ann Duffy), whose text is made up of verbatim interviews with a selection of members of the public from all four corners of the land. (London, home of the cosmopolitans, is excluded, except for professional politicians such as Dave, Boris, Jeremy and Nigel). As a BBC Radio 4 tie-in makes clear, it has been edited and arranged by Norris himself and Carol Ann Duffy, the poet laureate no less, and the effect is at first not ony clichéd, but also a bit bizarre: the evening starts with the figure of Britannia (how original), who summons the audience (how embarrassing) and tells us to listen (how patronising).

So. Britannia is joined by Caledonia, South-West, Cymru, Northern Ireland, East Midlands and North-East. And while Penny Layden’s Britannia gives voice to the politicians with some mildly amusing mimicry, and tells the story of the referendum, the other actors — Stuart McQuarrie, Adam Ewan, Christian Patterson, Cavan Clarke, Seema Bowri and Laura Elfinstone — imitate a host of interviewees, whose opinions come at us in sections devoted to subjects such as Europe, patriotism, hardship and, inevitably, immigration. As you’d expect, the attitudes are predictable: some reasonable, some racist, some frankly stupid. Conflicting emotions of anger, despair and disillusionment (and suspicion of foreigners, who are not given a voice and clearly don’t count as “British”) snake around the text.

At its best, there are moments of loveable eccentricity — Philip from the North-East equates Britishness with sitting “in a damp shed, brewing tea, pouring down rain” — but these happy phrases are very rare. Mostly, what we hear are clichés, resentments and ignorant opinions. Occasionally, Duffy lends some poetic flourishes, but mainly the words are mere journalistic reportage. Eloquence is swamped by cacophony, and the silliest images of Scotland (kilts), Wales (rugby) and Northern Ireland (line dancing) are played for laughs. To me, much of this has the cringing feeling of a student revue — and not a very good one at that.

What is so deeply disappointing is not just the wrong-headedness of the whole project, but its lack of imaginative theatricality. For most of the mercifully short 75 minutes running time, the cast sit at desks, or — in a dramatic surprise — stand on desks, or — in the ultimate stroke of originality — sit on a chair on a desk — in a show as static as Jeremy Corbyn’s poll ratings. All the things that characterize the best National Theatre shows — narrative ambition, wittily incisive text, visual splendour, imaginative use of space and star appeal — are missing.

So despite the odd glimmers of interest — a Geordie chip pizza, terrorists in Wiltshire, and a good joke about a brothel — the rest is a litany of the already well-known and well-digested. Added to this, the sheer pretentiousness of phrases recited in Latin, the tone of hectoring and loose talk about the sacrament of listening is all deeply tedious and uninspiring. The saddest aspect of the entire enterprise is that it is so unenlightening and such a waste of effort. What a missed opportunity, what a fiasco. So much so that it seems unnecessary to condemn designer Katrina Lindsay or David Shrubsole’s music. No need to labour the point. Congratulations Rufus Norris, you’ve just produced and directed the worst show of the year.

This article first appeared at http://www.sierz.co.uk.  Reposted with permission.  To read an original article, click here.