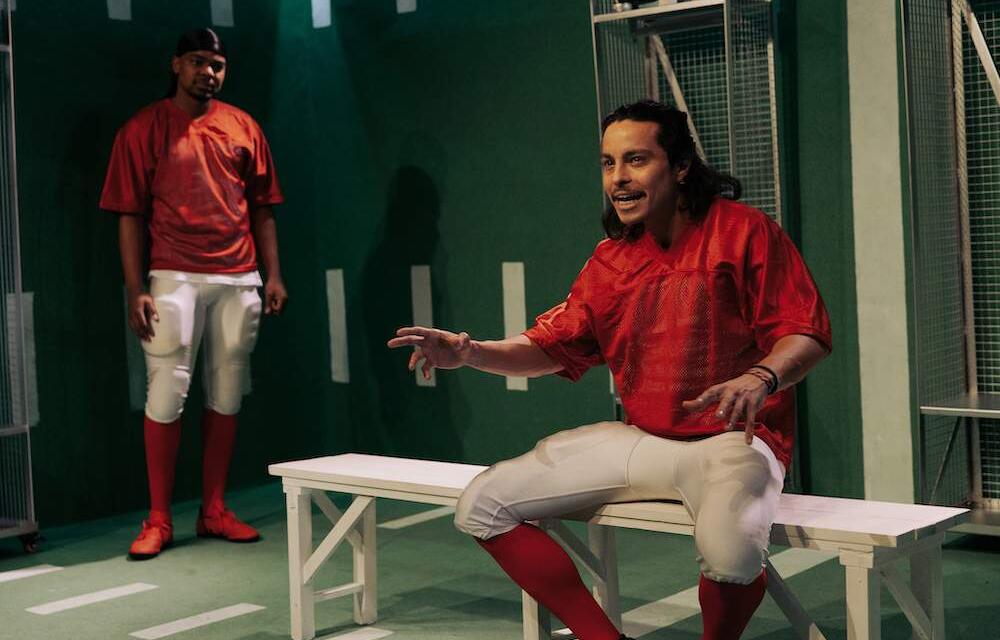 When do you have to take a stand? What compels you to do it? And what are the costs involved? These questions, which not only reflect the desire to protest against injustice in our increasingly troubled times, but also seem to prefigure a new spirit of defiance against our heartless government, form the tensed up backbone of American playwright Pravin Wilkins’s Moreno. This excellent debut play, which won the 2020 Theatre 503 International Playwriting Award and has recently completed its run at this inspiring new writing venue, brings together compelling ideas about personal ethics and race, celebrity and duty — and throws them into the context of American football. I watched the streamed version while isolating with COVID.

An unnamed National Football League team is looking forward to a record-breaking season because they have just signed a celebrity star player, the Mexican-American Luis Moreno, who has recently recovered from a knee injury. It’s a compact play so Wilkins has given him only three fellow players: the well-characterized Danny Lombardo, a white quarterback obsessed by the desire to win, and two African Americans: the serious and thoughtful Ezekiel Williams, who contrasts with easygoing and indiscreet Cre’von Garson. At first, their energetic locker room banter is all about macho posture: who’s a winner, why do they want to win, and how much are their abilities worth in money terms? Then something happens at another stadium which creates new tensions.

In 2016, during a series of pre-season games, NFL quarterback Colin Kaepernick made the decision not to stand during the playing of the national anthem. After he then repeatedly took the knee, instead of standing, he was criticized and explained that “I am not going to stand up to show pride in a flag for a country that oppresses black people and people of color. To me, this is bigger than football and it would be selfish on my part to look the other way. There are bodies in the street and people getting paid leave and getting away with murder.” The reference to police shootings of black people is clear, and clearly referenced in this play. Inspired by Kaepernick, Ezekiel — like many other black players — decides to also take the knee. But what will his team mates do?

At first, they are too shocked to do anything. Then the personal and racial tensions emerge. Danny, secure in his white privilege, argues that you should keep politics out of sport, and that gestures of protest are just wokeness gone crazy. Likewise, Moreno at first is pretty dismissive of taking the knee: his season is going really well and he is basking in the adulation of fans. He is in top form — a winner again. Cre’von, who gets on by pleasing his mates, is undecided. But when, after the election of Donald Trump, who excoriates Mexican migrants as “drug dealers, criminals, rapists,” Moreno’s mother suffers a racist attack, he begins to see more clearly what he has always known: that the issue of race in America affects Chicanos as well as blacks.

Wilkins clearly shows both the solidarity of protest, but also the tensions it provokes. This is a story about male friendship, and it convincingly pictures a world of testosterone-fuelled ambition and competition, expressed in sweaty hugs and bottom patting, as well as in verbal duels and point scoring. This boy play has to balance the call of teamwork and brotherhood with the individualism of personal glory and the desire for celebrity and its prizes. Pre-game rituals and bromance rub their padded shoulders with the personal and the political. But Wilkins is also asking, with increasing urgency as the drama unfolds, the crucial question: what would you do in order to protest against injustice? And, when this repeated protest is finally ritualized and ignored, how much further would you go?

The personal cost of standing up against power — whether it is racism or capitalism — is brilliantly underlined in a work of sheer emotional intensity, whose craftsmanship is outstanding. It is neatly plotted and there is no excessive over-writing. Like a good athlete, everything in the play text is taut and muscular, all tight and focused. As well as political goals, such as the depiction of black players as modern day slaves on a sporting plantation, there are lots of jokes and fun moments. I also really like the addition of background detail, of the parents who were Black Panthers, a gay brother, a vulnerable mother. Not only is the history of racism and anti-racism well sketched in, but Wilkins also delivers on the phrases that matter: I particularly appreciate his point about how black activists can get “mythical conscientious white folk” to join them in struggle.

Nancy Medina’s elegant production is well paced and rests on the skill and appeal of her actors: Sebastián Capitán Viveros (Moreno) and Joseph Black (Ezekiel) are very different characters, but they share a compelling watchability, offering powerful moments of convincing argument. These are also fully rounded people. In perfect counterpoint, Matt Whitchurch (Danny) and Hayden Mclean (Cre’von) add shades of complexity to both their own characters and to the play, notching up its intensity and its comedy. Aldo Vazquez’s colorful set is simultaneously a changing room and stadium pitch, while Ingrid Mackinnon’s choreography makes the scene changes thrillingly balletic. With its deeply relevant ethical questioning, its powerful portrayal of emotional truths and its political urgency, this is a superb piece of new writing.

This article was originally published by Aleks Sierz (https://www.sierz.co.uk/) on April 2, 2022, and has been reposted with permission. To read the original article, click here.