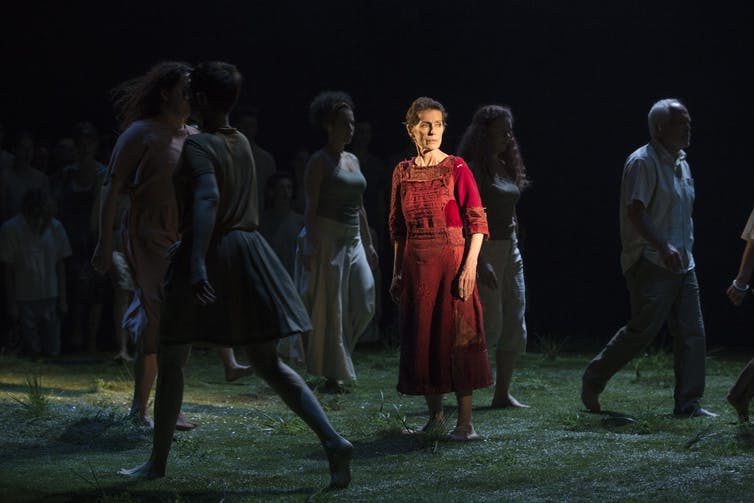 Helen Morse lends her voice to the poetry of "Memorial." Photo: Shane Reid

Arthur Danto, in his Analytic Philosophy of History, calls the common noun “scar” a “past-referring term.” In this way, language acknowledges the passing of time, representing verbally what happens to us physically. The mystery of appearance and disappearance in the world–the cycle of life and death–is caught in the warp and weft of how we speak, the soul made manifest by the word.

Memorial is a large-scale performance piece drenched in a sense of time passed. Based on Alice Oswald’s poetic exploration of the Iliad (the precise, and again temporally charged, descriptor is “excavation”), it brings together a transcendent score by composer Jocelyn Pook, deft movement of 150 supernumeraries by Yaron Lifschitz, and a charged narration by actor Helen Morse, a voice born to convey feelings of love, loss, and grief.

Chris Drummond, whose work has headed towards a new synthesis of refinement and ambition for some time, writes in his director’s note:

The idea of translating a work’s atmosphere is a compelling one, but coupled with the notion of enargeia (“bright, unbearable reality”), Memorial offered the possibility of being an immensely theatrical proposition. In the theatre, gods (and ghosts) are manifest, real, physical presences and in the right context, at its greatest, theatre can conjure a living communion with our immortal selves.

Just so. In essence, Oswald’s poem is a 90-minute-long casualty list. It names and details the deaths of the ancient combatants on both sides of the ten-year Trojan war–that distant struggle that has become the universal index for all war.

No Australian has to be told of the significance of blood-soaked beaches in the Dardanelles, of savage death under perfect blue skies. From the opening image of a stage covered in prostrate bodies all of whom slowly raise one arm, Memorial occupies a register of high pathos that is both personally familiar and nationally confronting.

Here we go: the long itemization of those who have lost their lives in causes that now seem so much hazier than the deaths they engendered. Things are much easier–and shorter–when enumerated rather than enunciated: one reason governments prefer statistics to vivid description.

The brilliance of Oswald’s writing lies in its combination of unrelenting singular focus with endless poetic invention, of simile and metaphor drawing on the natural world to capture a repetitive and eventually routine outcome (the deaths of combatants). Watching, I felt a visceral tug to memorize the text, to ingest its words into my mind. Hurriedly, I wrote down snatches afterward:

“He opened a door in the earth and an entire generation vanishes.” “This whole river is a grave.” “Grief is black; it is made of earth.” “The works of men pass away.” “Thousands of names, thousands of leaves.” “… and is gone.”

The stage of the Dunstan Playhouse in Adelaide is a forgiving one, but, even so, moving 150 people on it requires outstanding choreographic skill. Three of Memorial’s “soldier chorus” are listed as dancers; the remainder are drawn from South Australian choirs and opera companies. Choreographer Lifschitz’s approach is to keep the physical text in motion most of the time, then still the picture, or clear it, leaving Morse alone, in the gloom.

Sometimes this works with startling power, sometimes it feels a little overdone; movement for movement’s sake. The great benefit of such massification, however, is that it acts not only as a reminder of scale, but that a non-professional chorus cannot hide its polyglot humanity–the mad variety of visages and elbows, walks and hairstyles, eye-lines and auras. It is this difference that war kills, returning everything to the sameness of the grave, of gone.

Pook’s score is a golden stream of soft, devastating sadness: the sinuous reediness of oboe, shawm, and clarinet; the pong and chime of bells; the wail and keen of countertenor and Bulgarian and Macedonian vocals. The musicians are suspended on an illuminated bridge above the stage, like demi-gods. At its most climactic, Memorial’s music is almost literally mind-blowing. I thought, “If death is like this, it might not be too bad.”

But that’s life talking. In truth, when people die we have no idea what happens to them next, and that goes equally for the Archbishop of Canterbury and Richard Dawkins. De-heroicizing violent death, which has been part of the English literary tradition since the War Poets a hundred years ago, is surely also Oswald’s intent here. Many of her vignettes include the paralytic sorrow of those left behind–bereaved lovers, wives, brothers; crippled parents and children; lives torn apart and torn up. War looks sort of OK in the movies. But it really, really, really isn’t.

In bringing this piece into existence, director Chris Drummond shows two things. First, that his ability to handle the outsize tools of epic performance, previously on show in Night Letters and When The Rain Stops Falling, is now approaching the definitive. Second, that his interest in the human condition, in vulnerability, in drama, remains squarely at the center of his vision.

Plays always have to be entertaining, one of my students said to me the other day. Well, yes. But they also have to be much more than that. Memorial is full of the death that life is full of. It is deeply compassionate, a quality emanating not only from Oswald’s poetry but from every artist involved in the production.

Most compellingly from Helen Morse, who vibrates with feeling like a musical instrument herself. Her command of the text is total, her delivery shattering. She keeps herself on a short leash, emotion never spilling over the structure, bleeding heart shielded by dry eyes. But then if we started weeping, would we ever stop?

Memorial was staged as part of the Adelaide Festival.

This article originally appeared in The Conversation on March 6, 2018, and has been reposted with permission. 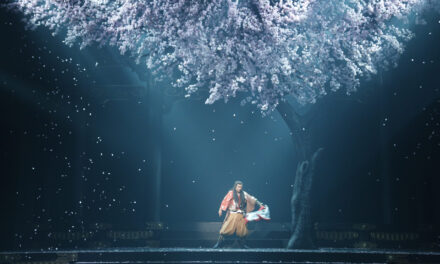