A Matter Of Grave Concern: The Oldest Theatre Group in Delhi Stages “Kafan” and “Kafan Chor” 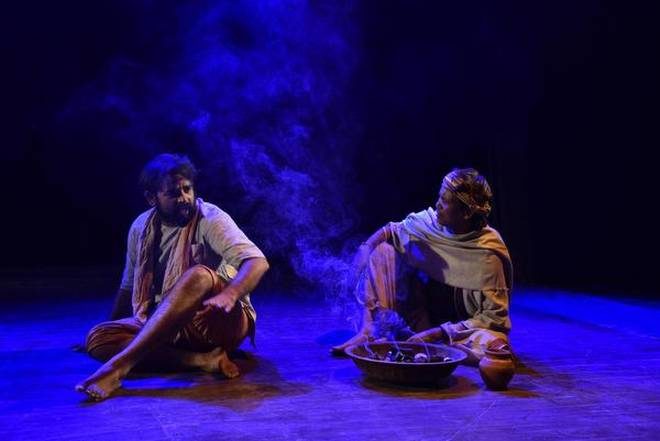 Three Arts Club formed in 1943 is one of the oldest theatre groups in Delhi which had attained popularity for regularly staging plays which entertained the audience and conveyed moral overtones. The plays produced by the group attracted a large number of emerging middle class as well as won over the patronage of leading political personalities like Dr. Rajendra Prasad, Jawaharlal Nehru, Dr. Zakir Hussain, and Hindustani theatre pioneer Prithviraj Kapoor who often attended its shows. After staging shows uninterruptedly for 40 years, it gradually stopped functioning with the aging of its founding members. It is heartening to know that the group was revived in 2008 with the concerted efforts of Anuradha Dar, an educationist and theatre promoter. Initially, it revived vastly popular plays by Ramesh Mehta which formed the repertoire of the group during its heyday under the direction of Sohaila Kapoor. Later, under the direction of M.K. Raina, Three Arts Club staged serious plays to cater to the changing aesthetic taste of the modern audience, commenting on the emerging socio-economic forces unleashed by neo-colonial forces.

Kafan-Kafan Chor, which Three Arts Club presented at Shri Ram Centre recently under the direction of M.K. Raina is yet another step to create socially relevant serious theatre that deeply disturbs, shocks and awakens the audience to dark forces that endanger human freedom and happiness. Thanks to the consistently brilliant acting of performers, the viewing was engrossing. The performances’ text is written by the director. 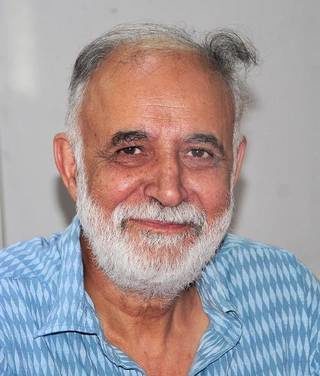 As the title suggests, the evening offered to the audience the enactment of two short stories which have one characteristic in common: kafan (shroud) which is a catalyst that sets the action afoot in both the adaptations. The show opens with Prem Chand’s immortal story Kafan with two characters—father and son—sitting downstage at right. Cries of the pain of a woman in advance stage of labor from backstage are heard. The repeated cries of the woman unnerve the father and son. In tattered and shabby clothes, they appear to be the poorest of the poor. They have neither money nor willpower and desire to take the woman writhing in labor pain to a hospital or take the help of any woman next door. However, they have not stopped eating roasted potatoes which they have stolen from the field of a farmer. They have no concern for the present and no worry about future—all that they wish is to lead a life of slothful ease. The face of father brightens up when he savors nostalgic moments, remembering a variety of dishes he ate up at the wedding of the son of the Thakur, praising his generosity. They work only when on the verge of starvation. The father asks his son to go into the room to see the condition of his wife but the son is too timid and lethargic to go inside. Father narrates the similar circumstances in which his wife died. Both son and father are trying to outsmart each other in eating more potatoes. Gradually, the deafening cries become feeble and then stop.

In the morning, they discover the young woman has died. Another humiliating quest begins—they go to a rich and generous Thakur to get money to buy a kafan for the dead. With the money they got after begging, they go to the market. Instead of buying a kafan, they go to a wine shop, buy a wine bottle and some eatables and, forgetting the dead, enjoy themselves.

Raina had directed this story for Hindi Akademi, Delhi a few years ago with the same presentational style. However, in the production under review, he has cast excellent actors. Durgesh Kumar as the father and Avanish Pandey as the son draw their characters with deft strokes.

This is followed by the enactment of another story entitled Kafan Chor written by Amin Kamil, an eminent Kashmiri writer. This piece brings us to the present, takes to another sensibility and another milieu. Kafan depicts the life of the downtrodden condemned to live at the bottom of the suppressed humanity with the narrative set in the time of Prem Chand (1880 to 1936). It presents the image of dehumanized humanity caused by severe deprivation, social and economic. Kafan Chor tends to deal with the contemporary political situation in Kashmir Valley with a collective struggle of the oppressed to discover its enemy who is robbing kafans from the bodies duly buried after performing rituals by exhuming the dead person’s body, leaving it in the open stark-naked. People become furious to discover this grave sacrilegious act. The mystery about kafan chor keeps on deepening as the nude bodies are scattered all over the graveyard. People’s earlier shock gives way to anger and then takes the form of a violent collective fight against chor.

Who is the chor, thief? With whom the people are engaged in a bloody combat? On this score, the production seems to be characterized by ambiguity. However, two abstract images—one depicting a woman carrying on her back the body of a dead person and later she carries the body of a man who appears to be a soldier—metaphorically suggest that it is a fight between state and the people and it also suggests that the violence ultimately destroys both the victor and the vanquished. Towards the end, we watch a woman in a wheelchair moving about downstage with national flags of different countries stuck to the wheelchair, symbolizing crippled humanity in search of peace.

The director has infused life and vitality into his production. The ensemble acting is engaging.

This article was originally published in The Hindu on December 1, 2017, and has been reposted with permission. 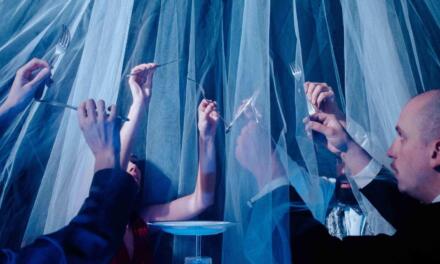