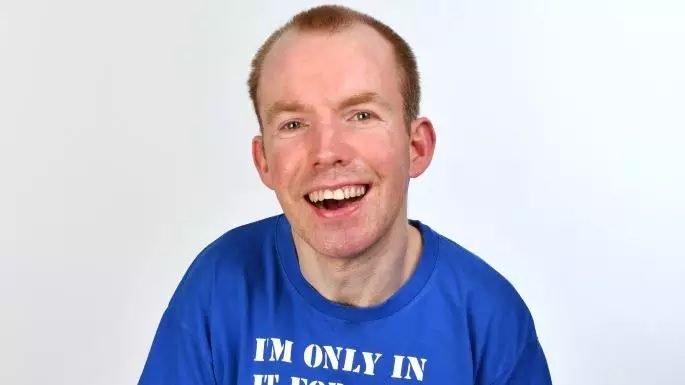 Lee Ridley, to give Lost Voice Guy his real name, is a former council officer from Newcastle whose cerebral palsy means he cannot speak. He starts as he means to go on. After we see the inspirational film made by Channel 4 for the Rio 2016 Paralympics, called Yes I Can, he says flatly: “No I f***ing can’t.”

He’s a talented gag writer, and the show is packed with one-liners as Ridley stands onstage with his iPad, his words delivered by a synthesizer with “a posh old man’s voice,” which he says cramps his chat-up style no end.

His love life–or occasional lack of it–supplies a lot of material, and he talks about the reasons his most recent relationship failed. As if to undercut any unwanted sympathy from the audience, he has a fine collection of wank and knob gags too.

Ridley slyly mocks his disability, saying that he’s too lazy to be a Paralympian, but that he’s the perfect companion in the quiet coach on a train. He’s also keen to dismiss the trite notion that having a disability somehow makes him a better person.

The computerized voice, which often has the emphasis in the wrong places and cannot do nuance, means that long-form jokes sometimes suffer in delivery and there’s dead air in the room.

But when the pace slackens he introduces his version of Play Your Cards Right, a sort of disability Top Trumps in which the audience must decide if disabled celebrities would have more or fewer points than Ridley under the Government’s assessment system for fitness to work and eligibility for benefits.

Do we go higher or lower from Lost Voice Guy to Stephen Hawking, or higher or lower to Oscar Pistorius under Ridley’s ludicrous made-up categories? The point is deftly made that his don’t make any less sense than the official definitions of disability.

This article first appeared in Inews on August 7, 2018, and has been reposted with permission.