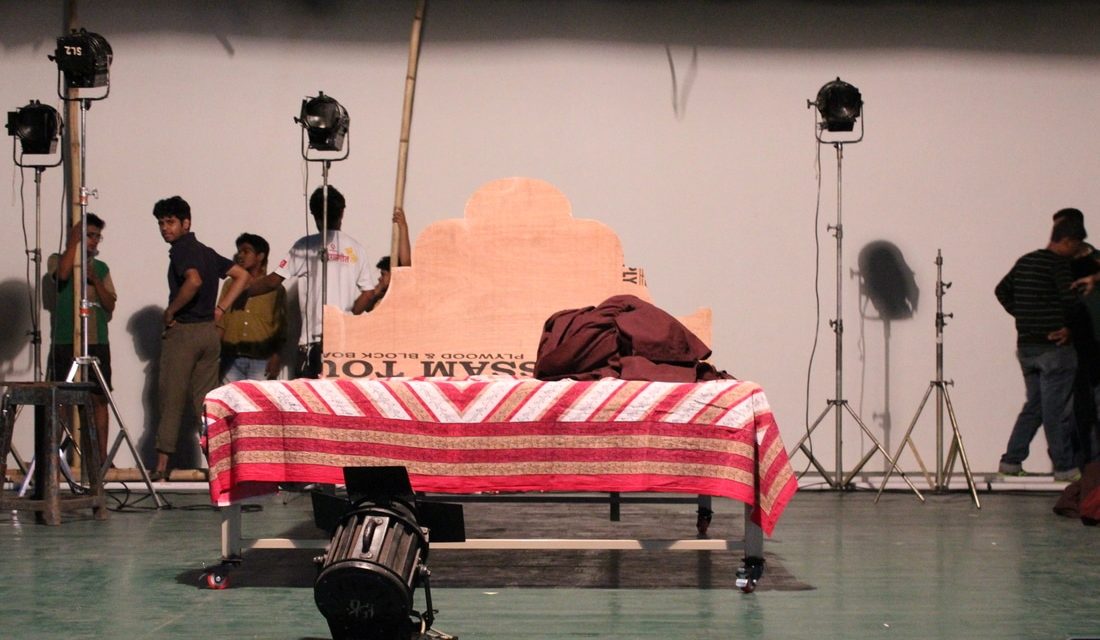 The dark horse at this year’s Mahindra Excellence in Theatre Awards was the Natak Company’s Item, which shared winners’ spoils with Jino Joseph’s political allegory, Nona. Written by Siddhesh Purkar, Item features poker-faced Sainath Ganuwad as its de facto narrator, a Mr. Fix-It persona who shepherds the mercurial career of a B-grade star, Sapna Shetty (Dipti Kachare). Shetty’s star-crossed trajectory from wide-eyed ingenue to jaded also-ran follows the predictable arc we have come to expect of such cautionary tales about the pitfalls of showbiz but receives a decidedly novel treatment by director Kshitish Date.

For one, the set design by Ravi Choudhary is unrelentingly hyper-real, taking us on location a B-film teeming with stagehands, light fixtures, and other identifiable paraphernalia. The lack of artifice surprisingly lends itself well to a theatricality of presentation (including the inventive use of the dolly track). The “films within the play” allow us detours into the eponymous item numbers (choreographed by Spruha Kulkarni and Bhargavi Sardesai)—it is a transference easily achieved.

Ganuwad’s wry, deadpan commentary has parody written all over it, and gets the requisite laughs, milking the benefits of depravity from an audience eager to lap up the smut along with the satire, almost counter-productively for a play that is also part-exposé. As things wear down, Item’s empathy for Shetty’s lot reveals itself. The B-film ethos to which she belongs is evoked in an impersonal rather than invasive manner, recreated without moral judgment or critique. The sleaze, always implied but never present, remains undercover, and we are invited to look at this world as just another everyday profession.

This certainly carries with it the charge of sanitization. This is most evident in the “items” that are positioned as desultory set-pieces perfunctorily staged by Shetty and her accompanying dancers. Although they feign a mock catchiness and are about as risqué as 1970s era chest-heaving or pelvic-thrusting, they do not contribute to the play’s entertainment quotient in any gratuitous sense. These choices certainly speak of the play’s strong dramaturgical design.

In one scene, where only the cameraman shooting a soft-core sequence is present on stage (and not the scene or its actors), the absence of graphic detail allows the interlude to unfold much more unsettlingly. Less is certainly more on such occasions.

Item is a play that is rife with contradictions because, on one hand, it does not wallow in the luridness of the world it trains its steadfast gaze upon, it also wants to embrace the realism that films like Miss Lovely or even The Dirty Picture haven’t shied away from. That Item doesn’t go all the way seems like an allowance made for the straight-laced middle-class audiences that the Natak Company has assiduously cultivated, and in that sense, it regrettably “others” the play’s universe and makes us voyeurs rather than co-conspirators. We are invited for an intimate dekko via Ganuwad’s compelling insider narrative but also protected from being complicit in an ethos whose products we have no doubt consumed in the privacy of our homes. In that, the power of the satire is stunted somewhat.

Kachare’s impassiveness, though, speaks volumes. Her character certainly lacks an awareness of the morass she is stepping into, thus she remains unsullied by the salaciousness of her profession. The eschewing of heavy-duty theatrics in her performance—which the life story of an actress would otherwise pivot around—might accommodate Kachare’s range as an actor but it also allows us to view her through a strangely neutral gaze, never feeling for her but staying with her story through and through.

In just her early 20s Kachare still does much with the slow-cooked degradation of soul her character goes through over a veritable lifetime (that ephemeral spell under the arclights). It makes her, quite deservedly, the stricken centerpiece of the documentary endeavor that Item indubitably is.

This article originally appeared in The Hindu on August 3, 2018 (IST), and has been reposted with permission.