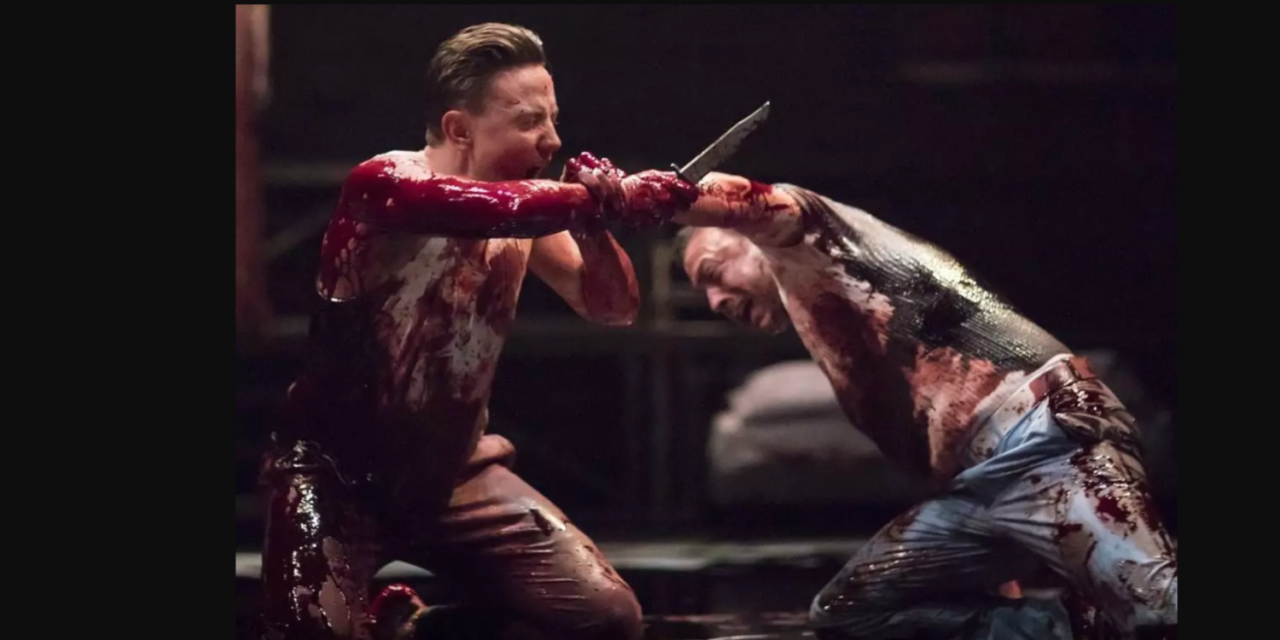 Actors covered in fake blood during the "Duchess of Malfi" at the RSC.

“We will not glorify violence”

Visit Ruth Cooper-Brown at the weekend and you might find her “getting bloody” in the kitchen. Just how bloody will depend on whether she wants to produce a splat or a spurt.

Making and selling different types of theatrical blood is part of the “recipe for violence” the fight director offers through Rc-Annie, the dramatic violence company she runs with Rachel Bown-Williams.

The pair choreographs fight and death scenes for stage and screen, and are behind the stranglings and stabbings in the Royal Shakespeare Company’s current production of John Webster’s revenge tragedy The Duchess Of Malfi in Stratford-upon-Avon.

Between 70 and 80 liters of blood, albeit not made by Rc-Annie, are pumped onto the Swan Theatre stage during every performance, with audience members in the splash zone given protective blankets.

This gory staging presented its challenges. The fight directors had to choreograph fights closer to the sticky and slippery floor to make them safe and build slips into the actors’ performances.

“You’re in the blood”

“The fights become incredibly visceral very quickly because you’re in the medium; you’re in the blood,” she says. “It’s on your hands: you touch someone, you leave it there. You put your hand to your mouth, you’ve left blood.”

She and Bown-Williams, who are among only a handful of women making a full-time living from fight directing in the UK, pride themselves on making their (safe) fights look messy.

But they do not believe in violence for violence’s sake.

“There is no point putting any act of violence on the stage unless you’re looking at it from intention and story,” says Cooper-Brown, who works on everything from boxing to aerial stunts, gun battles to sword fights.

For that reason, there is work they will not do.

“We will often be asked, maybe because we’re women, to do things to excuse the fact that maybe this is a bit dodgy in how they are treating a woman,” she says. “Sometimes…the women are scantily clad and they’re doing a fight scene. You go, ‘So why’s this happening? This is pure titillation, isn’t it?’”

There are positives to being women in the business, however, as performers doing an intimate scene, or one dealing with rape or domestic abuse, can be more reassured to work with a female fight director. Sometimes actors have experienced similar scenarios off-stage.

“We pride ourselves on approaching that very sensitively,” says Cooper-Brown.

Starting out as an actor, Cooper-Brown, 46, found herself drawn to “slightly more aggressive roles.” She trained as an actor fighter by taking British Academy of Dramatic Combat (BADC) qualifications and then met Bown-Williams when both were training to become fight teachers.

In 2005, they launched Rc-Annie, which also hires out weapons and provides specialized combat training, and believe themselves to be the country’s only fight-directing duo.

To choreograph a fight or death, they start by reading the script and creating a “fight manifest.” In this document, they detail when their help might be needed, make artistic suggestions and identify potential risks. They then share this with the director and formulate a plan.

Meeting the cast at a read-through allows them to get a sense of the show, and how the actors move and their abilities.

“Everything has to be tailored to that human but, equally, with the end sight of what we need to achieve,” says Cooper-Brown, who was the first woman to chair the BADC. “It’s all about the story. We’ve got to fulfill what the director wants within the realms of the costume and everything.” 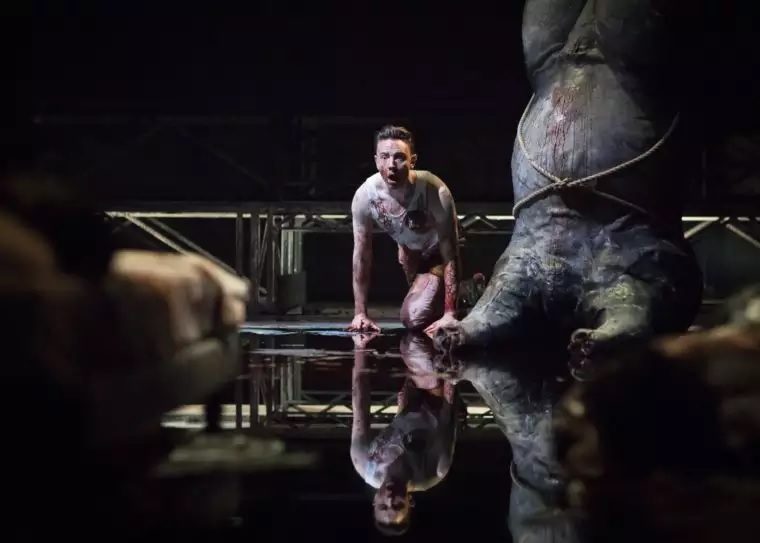 An actor crawls across the stage during the Duchess of Malfi at the RSC.

The staging of one small scuffle could require them to make three visits to a theatre; The Duchess Of Malfi has at least six moments of “fairly complex action.”

The show has been a learning experience for Cooper-Brown.

“I’m finding it very interesting how in some respects you don’t need a lot of violence because the blood is having such an effect on the audience,” she says.

There is an ongoing debate about the depiction of violence on stage and screen.

The National Theatre’s production of Sarah Kane’s Cleansed, on which Cooper-Brown and Bown-Williams worked, made headlines in 2016 when some audience members fainted watching scenes of violence, rape, and torture, and others walked out.

Cooper-Brown did not find Cleansed that shocking.

“By our standards, it was actually quite tame in terms of how disturbed you are–it really goes to show how it’s all about psyche,” she says. “When you watch [The Duchess Of Malfi] it’s fascinating watching the audience. When the blood starts to seep…some people have a massive reaction to it.”

She and Bown-Williams “will not glorify violence,” but reflect society.

“Violence shouldn’t just be there for the sake of it. If you were to do something really shocking then you have to justify that.”

This article originally appeared in Inews on April 6, 2018, and has been reposted with permission.