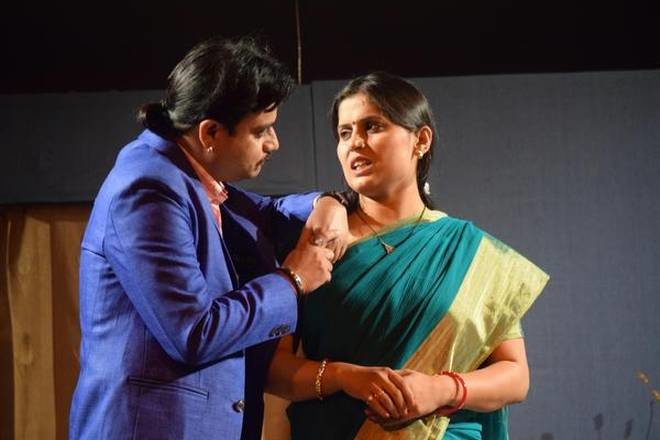 The well-known amateur theatre group, Pratibimb Kala Darpan is committed to providing aspiring theatre artists platform to produce a serious play maintaining artistic standards. It is also wedded to the objective of conferring awards to a veteran as well as young artists for their contribution to enrich theatrical art at an annual event known as Pratibimb Natya Utsav. Featuring five plays directed by seasoned directors, this year’s festival was held at Muktadhara Auditorium recently which evoked a tremendous response from the discerning audience. The festival ended with the presentation of Life… A Bitter Truth by Pratimb Kala Darpan. Prior to the opening of the show, eminent theatre director, playwright and innovator Bhanu Bharti was conferred Pratibimb Lifetime Achievement Award which carries a citation, a shawl and a sum of ₹10,000. Expressing his gratitude to the Darpan for honoring him, Bhanu donated the award money to the group to provide aspiring artists with more avenues.

Directed by Rajesh Babbar, Life…A Bitter Truth is Hindi translation of Pali Bhupender Singh’s play Ghar Ghar in Punjabi done by the playwright himself retaining the original title. Babbar changed it to Life…A Bitter Truth, suggesting human life as the wasteland devoid of happiness. In fact, the narrative of the play is precise, logical with the resolve to revolt against female oppression to create a better world to achieve gender equality. Thanks to Punjabi Academy, Delhi we have seen a one or two plays by Pali revealing a new awareness of resistance among women oppressed by patriarchal society. In the struggle lies the hope.

As the curtain rises, we watch two images on the either side of the center stage — one image depicts two kids quarrelling over a game they are playing and the other reflects a woman and a man — indicating that the drama is about a family. These images set a serious tone which intensifies as the narrative unfolds. As soon as the kid and the man leave the stage, the woman expresses her indignation at the daughter for ignoring her homework. The box set and the properties used to establish the ambience of the middle-class residence with a female domestic help. The monotony of the atmosphere suddenly animates with the unexpected arrival of a young woman, Kamini, who claims that she was the class fellow of Ajit, the head of the family at the university. Bold, frank and vivacious, she tells the wife of Ajit, Aman, that her husband has thrown her out of the home and kept with him their daughter. Though a highly educated and working woman, she has to struggle in the hostile male world to be treated with respect.

Through the interactions between dramatis personae, the illicit relationship between Ajit and the domestic help, Bindu is revealed, leading to turbulence and an anguish in the family life of Ajit. The revelation by Bindu that she has been impregnated by Ajit, intensifies the family conflict. The enraged parents and brother of Bindu accompanied by local politician enter the scene leading to angry tirades. Now Ajit stands as criminal, who has betrayed his credulous wife and sexually exploited innocent young domestic help in the garb of a benefactor and true lover.

Playwright Pali has provided insight into the characters drawn from the middle-class urban life realistically. Dealing day-to-day domestic affairs, the playwright has created an artistry that is intense and vivid.

Director Babbar’s production is neat and his treatment is sensitive. However, the climactic scene where the family members demand justice for their daughter tends to be dragging. It needs to be punchy, precise, tense and provocative.

Bhanu Malik as Kamini, the class fellow of Ajit, creates a powerful portrait of a deserted woman devoted to fighting for the cause of women deceived by their heartless husbands and lovers. Sneha as the sexually exploited domestic help appears on the stage for the first time impresses the audience. Ashish Sharma as Ajit, Shuchi Pandey as Aman, and Hari Semwal as the alcoholic father of domestic help, give creditable performances. It is heartening to see Hari Semwal, a respected director and actor of the Hindi and Garhwali theatre on the stage after a long time.