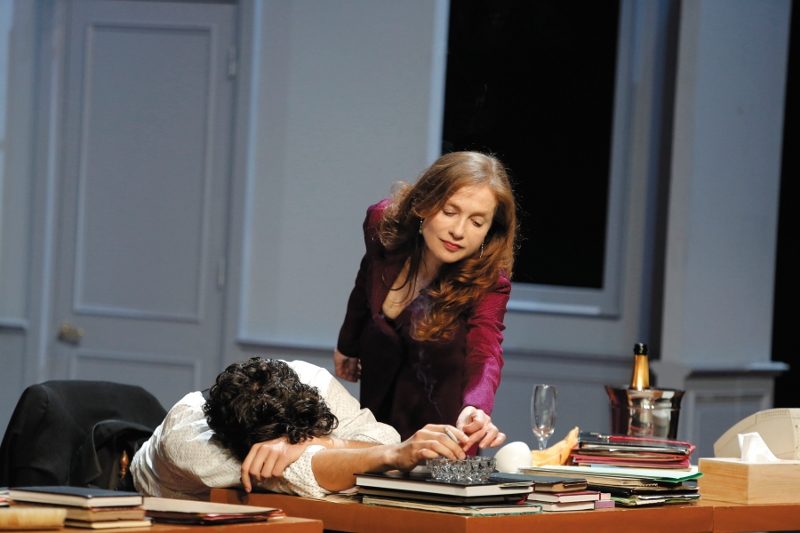 From the 12th to the 17th of December, Rome will host the XVI edition of Theatre Prize and the XIV edition of the Europe Prize Theatrical Realities. This is un unconventional occasion to meet and get to know the awarded artists, pieces and performances, and to take part to follow approach to theatre. Contributing to the realization of the event is the Theatre Rome. The Prize forms part of the celebrations for the 60 Rome and the G7 as a special project of the Minister of Culture, also by the will of the President of the Italian Republic. These celebrations coincide with the anniversary of the Europe Theatre Prize, the first cultural initiative in the field of performing arts promoted by the European Community.

Europe Theatre Prize and the supportive Board of Advisor, have awarded the XVI Europe Theatre Prize to two emblematic figures of the international scene, two actors whose theatrical formation played a key role in the choosing process: Isabelle Huppert and Jeremy Irons, artists able to migrate from the field of theatre to that of cinema and vice-versa. Therefore, for the second time after Michel Piccoli, the prize goes back to actors. This year the Prize considered of major importance to assign two more prizes: a Special Prize to Prize for Literature in 1986, that, through his work, was able to create an ideal bridge between Europe and Africa. A commitment that accounts the current problematic relation between the Old Continent and Africa. For similar reasons, a Special Mention was given to Theatre of Tunis, critical sense despite the period of turmoil, illusions and disillusions marking the lives of the populations of Maghreb and of the Arab world. Since the establishment of Europe Prize Theatrical E.T.P, great effort has been put in the research of the most creative, significant, and innovative theatrical initiatives of Europe drama, regardless of styles, articulations, and forms of expression, without limitation.

The Jury for this XIV edition of the Europe Prize for Theatrical Realities chose Susanne Kennedy, a director who explores the connection of theater with other forms of art and who is able to make actors, words and ideas move and intertwine in her works which are performed in spaces that are at times stages and visual art installations. Jernei Lorenci whose ambition is to establish a special flow of emotion between stage and audience, Yael Ronen, a candidate from 2009, cosmopolitan playwright and director capable of portraying tragic socio-political situations with humor and only apparent levity, therefore increasing the audience awareness of urgent and outrageous circumstances. Praiseworthy is her work in Israel with Israeli and Palestinian actors, continued in Germany with Syrian actors. Alessandro Sciarroni, visual artist and performer who always astonishes those trying to cage him in one single genre. Kirill Serebrennikov, author, cinema, and theatre director, scenographer, and inventor of new scenic spaces, director of prestigious theatres: an all-rounded brilliant and innovative artist. Theatre NO99, a candidate since 2010, acting company that combines political commitment and a working method based on a steady and active cooperation and interaction between director and actors.

The President of the Jury and E.T.P, in line with the Council, have also decided to confer a Special Prize to Dimitris Papaioannou. A well-deserved prize for this director and visual artist, a candidate since 2007, whose fame and prestige have reached the highest edges of European theatre in recent years. Such contributions are so important for us to consider this Special Prize urgent, deserved, and proper. The Prize has also decided not to be a mere moment of celebrations. The artists, for instance, give their contribution through performances, premieres, readings, and workshops. They will also take part in meetings and conferences in order to give the audience, the critics and students of theatre the possibility to gain insight into their way of doing theatre. Usually, the meetings gather testimony of those who, in one way or another, participate to the artistic career and the production of either a theatre person or company together with speeches by critics, scholars and journalists of the international press. The Returns section involves productions of artists awarded in the previous editions of the event.

This year it will include the performances of Giorgio Barberio Corsetti on the 12th of December with King Lear, of Robert Wilson who, together with the National Academy of Drama Silvio D’Amico, reinterprets Hamletmachine by Heiner Müller, and of Peter Stein with his Richard II by Shakespeare.

This post originally appeared on Scena.ro and has been reposted with permission.