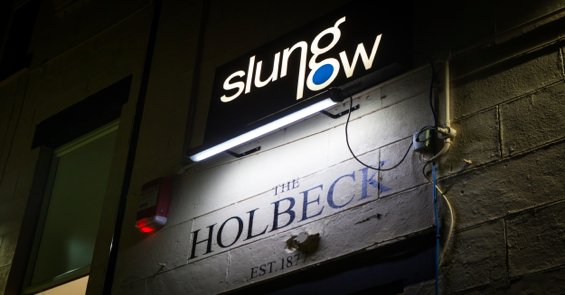 Entrance to the Holbeck, 2019. Photo courtesy of Alan Lane.

This article is part of the Dramaturgs’ Network’s Invisible Diaries series.

I am part German and part British; I am part academic and part dramaturg; I am part theatre and part opera; I part practice, and part teach and research liveness, mediatization and adaptation studies. I generally try and make a virtue of all those states of in-between by saying I am interested in the intercultural, intermedial, interdisciplinary, but first and foremost, I am a dramaturg. Both Duska and Katalin have mentioned Marianne van Kerkhoven in their diaries, and her articulation of a dramaturg’s default state of “in-between.” She will appear later in the week, as her work has been occupying me academically. Today, I am starting out with an adaptation process: a repurposed theatre company occupying the in-between space of creativity and community care: Slung Low, based in Holbeck, Leeds.

I have freelance dramaturged for Slung Low on many occasions, even though my work as their resident dramaturg only started on 1 April, 2020. It is made possible by funding from the Gulbenkian Foundation, under the header of civic responsibilities of the arts. Slung Low has never shied away from their civic responsibilities. Their large-scale, outdoor adventures for audiences have always wrestled with the “now” and sought to smash up existing structures of hierarchy and entitlement – whether they were producing contemporary plays or adapting from timeless texts like Camelot, The White Whale, or the Bible (Flood Parts 1-4, for Hull 2017). At the center of the work have been the principles of being useful and being kind: sharing space with audiences, other companies, community groups; sharing work (and introducing “pay what you decide,” now widely practiced across the sector); sharing resources and working hard to return the privilege of public funding on lots of fronts.

Since Slung Low’s move to The Holbeck – the oldest continuously operating social club in the UK – in January 2019, lots of expansions and adaptations have taken place (see Alan Lane’s Blogs for history, detail and reports of key battles!). More space (and heatable space) has meant guest companies perform every Sunday, all year round. A Cultural Community College has opened up creative learning for the community and beyond: free at the point of delivery, and again, pay what you decide for participants. It’s about learning for learning’s sake; useful, confidence-enhancing, creative learning. The company has worked hard to expand co-creation with the community, and the transition towards Leeds People’s Theatre kicked off with the short film The Good Book (released on 1 May). There are plans to make connections with People’s Theatres all over the UK, and the funding which pays for my work is also linked to that initiative.

There are other adaptation processes, to do with a progressive, uncompromising theatre company and a change-resistant community of club members, shaped by being in a ‘forgotten’ part of Leeds, often resulting in anger and lack of trust. Sharing a space means taking one step forward, two steps back, forging compromises, winning people over by ‘turning up, and then eventually they stop hating us’ (Alan Lane in Dec 2018). Saying yes to all suggestions and ideas, while creating a space where everyone is welcome has been exhausting, but engagement has soared and the community is benefiting way beyond performance and creative learning. Entrance to the Holbeck, 2019. Photo courtesy of Alan Lane.

This was where we were before the world changed, just under a month ago. The Holbeck closed its bar and its public-facing operations on 17 March. They honored contracts with bar and cleaning staff and visiting theatre companies; their battles with the insurance company (who said that they could not pay out unless someone contracted COVID-19 on the premises) continue creatively. The need to look after the vulnerable has registered with many creative organizations and individuals. Slung Low was quick to jump in, supporting Holbeck Together, connecting with local food banks and Leeds Council’s new scheme for COVID-19 volunteering. Within days, they were asked to be the local hub for food bank referrals, and the adaptation process happened in no time at all. Supermarkets, the Real Junk Food Project and other organizations ensure ample supplies and Slung Low coordinate a growing group of volunteers who deliver food, prescriptions and who make connections with vulnerable, often frightened people who are unable to leave their houses. Some of the skills needed here are very compatible with those of a theatre company. Slung Low is holding the space and is still managing to produce creative work (a lamppost gallery, a fortnightly game show, streamed live). Company thinking is that now is exactly the time to smash the notion of “that’s just how it works” away, to measure up to standards of real community engagement and participation. We can still be brave and visionary while feeling scared.

[…] to hope till Hope creates / From its own wreck the thing it contemplates.

Food bank work has resulted in a lot of thinking about dramaturgy and everyday life. I’ll be writing about behavior as performance, as encountered in the LS11 postcode, in other entries. The organizational structure for the food bank hub operation, as devised by Slung Low, based on the dramaturgy of The A Team, according to Alan Lane, who also took this photo. (Illustration courtesy of Kara McKechnie).

Dr. Kara McKechnie is a German-Scottish hybrid. Born in London and educated in Germany, she worked for Opera Stuttgart, Opera Karlsruhe, Heidelberg Theatre et al. Her academic career started at Heidelberg University and continued at De Montfort University (PhD thesis on Alan Bennett; monograph 2007). She has worked as a Lecturer in Dramaturgy at Bretton Hall, then the University of Leeds. Since 2000, she teaches and supervises for the Schools of Performance & Cultural Industries and the Schools of Music. She has worked with Opera North and Leeds Playhouse on many projects, has published a monograph on Opera North (2014) and regularly collaborates with opera director Alessandro Talevi in the UK and Italy. Kara is a resident dramaturg for Slung Low (Leeds), funded by the Gulbenkian Foundation. Slung Low has ‘repurposed’ as a hub for food bank referrals. Their short film, The Good Book, was released online on the 1st of May.

This blog entry appeared on the Blog of the Dramaturgs’ Network on 21 April 2020, as part of the Invisible Diaries series, and has been reposted with permission. 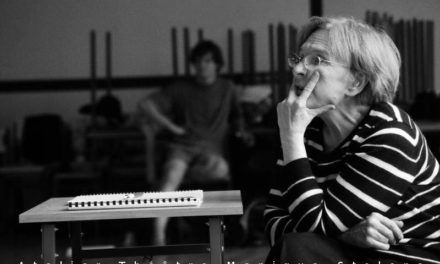