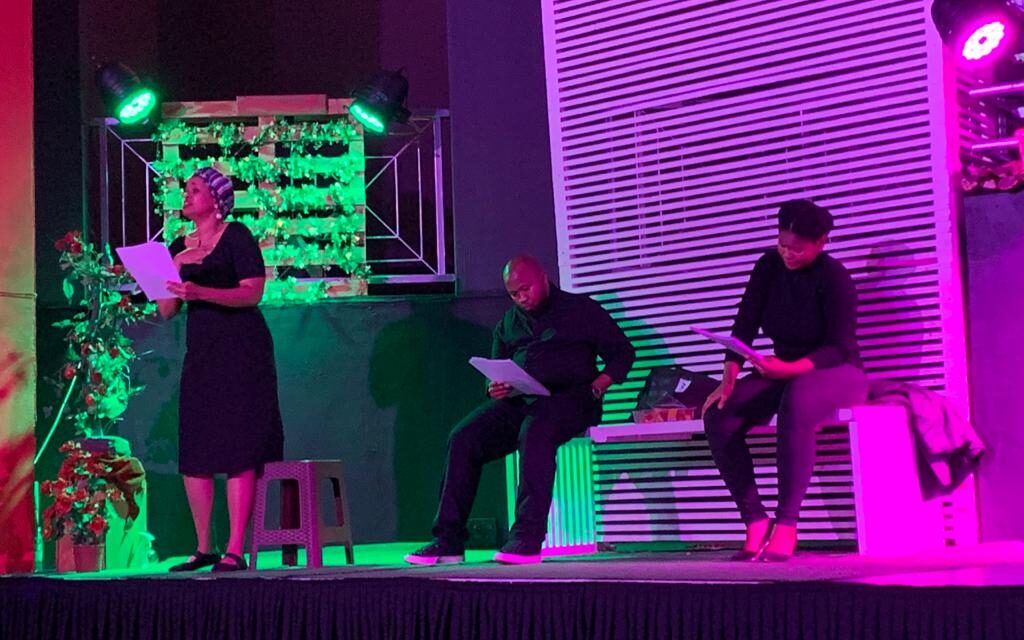 A staged reading of "In Their Words" at the Tin Town Theatre in Johannesburg, 2020.

In Their Words, a staged reading which recently took place at the Tin Town Theatre in Johannesburg is a harbinger of things to come.

By definition, a staged reading is a form of theatre where a “skeleton production” is put on stage, and where the actors are in character and with their scripts on stage read their lines to each other as the play progresses.

This kind of theatre is not often seen on the Johannesburg theatre scene perhaps due to the fact that audiences are used to watching full productions from opening night and throughout until a production closes. Staged readings are generally done as part of the play-workshopping process and do sometimes have a paying audience attending with one of the goals being for the writers to get a sense of the action as it is staged and make note for changes once the full script has been developed and is produced.

Featuring a stellar cast, the staged reading of In Their Words gave those who were able to attend a snippet of what they could expect as the story which centers on a man accused of sexual assault who tries all manner of tricks including attempting to convince his sister who is a lawyer to represent him to ensure that he is not convicted of the crime. The story is compelling and the way the actors relate to and with each other already gives a sense that once fully developed this production will be a hit as it touches on topical issues and explores how a family is almost torn apart by the actions of one man.

The innovativeness of a staged reading is that it allows for actors to perform without the pressure of the glaring spotlights and weight of expectation from an audience that wants value for its money – in an era in which theatre has been decimated by COVID-19, staged readings could be one of the more cost-effective ways which present an opportunity for the actors to work and also for audiences to finally return (all COVID protocols observed) to the theatre space.

In Their Words is definitely be one to watch when it is staged as a full theatre production.

In Their Words produced by Tin Town Theatre in collaboration with Motional Picture Productions was written and directed by Tshepo Samuel Raton. The staged reading featured Mandla Gaduka, Sisekho Velelo, Tumi Modise, and Kgalalelo Seletedi and was on at the Tin Town Theatre from 20 – 22 November 2020.

This article originally appeared on TheAfricanTheatreMagazine.com on December 6, 2020, and is reposted with permission. To read the original article, click here.