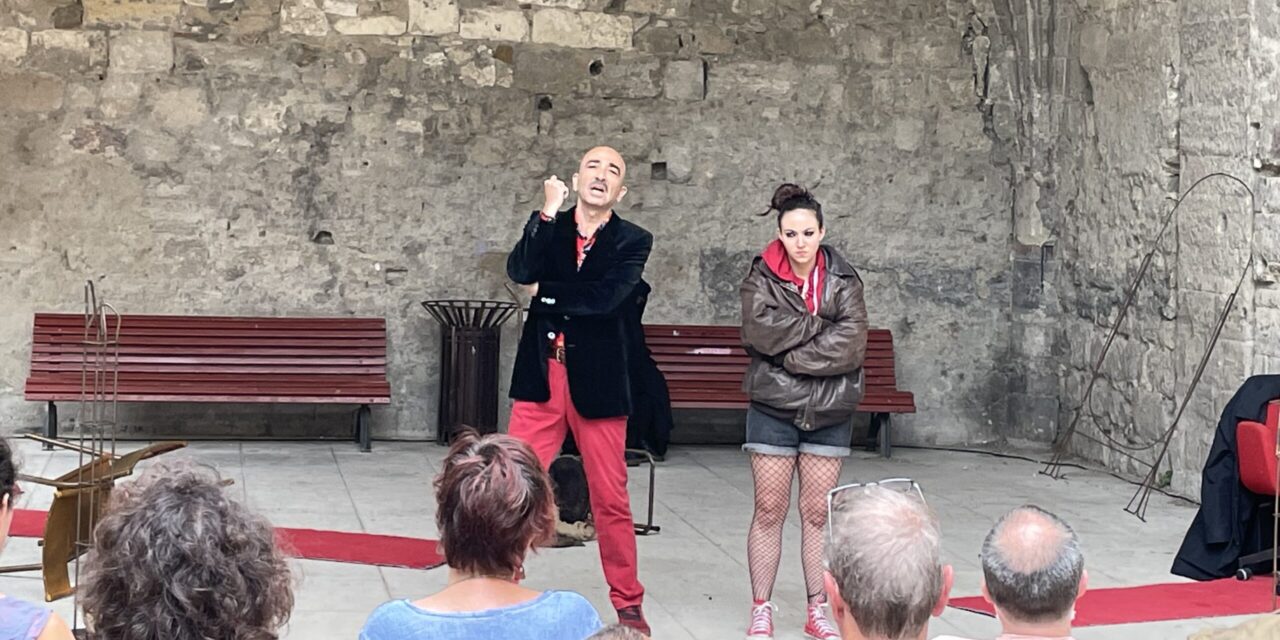 One of the highlights of this year’s Avignon Festival was Boxing Shadows, written especially by Australian playwright Timothy Daly for the Isabelle Starkier Theatre Company (Compagnie Isabelle Starkier).[i] The play is the fourth of Daly’s to be produced by Isabelle Starkier (The Man in the Attic, Kafka Dances, Richard III [or almost]), and seals Daly’s and Starkier’s friendship developed from professional collaboration. Boxing Shadows likewise tells of the power of friendship, albeit an unlikely one: a young illegal immigrant called Ariane (played by Clara Starkier) who makes her crust by pickpocketing strangers in the metro befriends librarian Raymond (Roland Timsit), one of her victims who also happens to be a neighbor. Ariane seems like a tough cookie, but her fearless exterior soon crumbles as she confesses to being terrified of the young men who threaten her in the underworld of crime and marginalization in which she circulates. Raymond, a former fighter, takes her under his wing and instructs her in the art of boxing. Boxing Shadows is a compelling tale of improbable amity. What stands out about this adaptation is its immersive moments, which invited spectators to question their own preconceptions and prejudices about people from the banlieue, the French word for suburb, highly charged with connotations of racialized ghettoization explored prolifically in French cinema from La Haine (Kassovitz, 1995) to Bande de Filles (Sciamma, 2014). Like me, the Avignon festival’s theatergoers are mostly white and middle-class, making Boxing Shadows an important occasion of reckoning with our racial and social privilege.

We were invited to interact with the production from the beginning. Instructed to meet outside Avignon’s Théâtre des Carmes André Benedetto, we were guided by a woman holding an umbrella draped in the red silk-like material of a boxing gown around the corner to the quiet park where the dramatic action took place, in the Jardin des Carmes. Once seated, we were told by the director, Isabelle Starkier, that the journey we had just taken was a “migration”—a keyword defining the life of Ariane, the play’s protagonist—and that a few minutes would elapse before the play started. This positioning of audience members as engaged in a similar process of migration was evoked half in jest, perhaps as an acknowledgment of the differences between us and the precarious life of Ariane; however, it did encourage us to reflect on our relationship to a word all too often falsely reserved for a community of illegal immigrants as a signifier of stigmatization and social exclusion.[ii] By simulating spectators’ own migration, the word was normalized, applied to anyone on the move, creating an erosion of distance between spectators and the play. 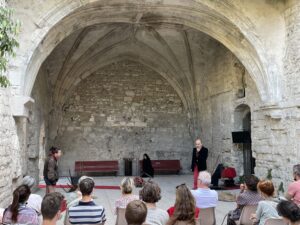 The creation of proximity between us and a defining theme of the play recalls the Guerrilla Theatre movement of 1960s and 1970s in France. For example, Fernando Arrabal’s 1969 And They Put Handcuffs on the Flowers denounced the political imprisonment of dissenters under Franco by staging spectators’ own constraint and entrapment. Such techniques aimed to stir audiences out of a state of passive viewing into direct action.[iii] An objective of the Isabelle Starkier Company, no stranger to taking theatre to the street (“street theatre” being a synonym for “Guerrilla theatre”),[iv] is similarly to use theatre to transcend distance and difference, as a tool for forging bonds between people across divisions of generation and social status.[v]

While waiting for the start of the play, we had the opportunity to take in the scenography, which was minimalist but rich in polysemy. Three four-pronged corrugated iron posts have top edges that are bent into hooks, the creation of artist Julie Poirier whose mission it is to transform discarded materials into “luminous sculptures”.[vi] Three red carpets, meanwhile, extended inwards from the stage edges, reminiscent of Hollywood award ceremonies. A similar synthesis was implied in the chairs that adorned the stage: metal chairs and stools propped up in odd angles in the centerstage were a counterpoint to the crimson swivel chair on a matching carpet positioned in front of a television screen house right. A wasteland of heavy-duty metals and war-like sandbags representing the banlieue was transformed by red-hued glamour, while the location of the production in the vault-arched Carmes cloister imbued the scene with a sense of the sacral.

Once the action begins, we realize that the red carpets divide space into a trinity, according to the lives of Boxing Shadow’s three characters:[vii] lonely librarian Raymond (Timsit) watches the infotainment channel BFMTV on a loop on the screen above the red carpet house right, which delimits his apartment; Ariane’s (Clara Starkier’s) world of street crime, pickpocketing, and terror by the men who harass her is symbolized by the red carpet extending inward downstage house left; the red carpet coming in from the upstage house left is dominated by the production’s singer, Lila Maski, who through breath-taking operatic tonalities conveys Ariane’s fears and struggles as the latter’s sublime (or sublimating) alter ego. These worlds collide throughout the performance. The characters wander into their neighbors’ space as a spatial enactment of the theme of encounter at the heart of the play.

For French scenographer Marcel Freydefont (1948-2016), immersive theatre does not need to involve audience members’ constant or wholesale interaction to grip us; it can use multisensorial means to create a sense of vertigo that unsettles us to the point of reaching our emotional depths.[viii] There are elements of this in Boxing Shadows. The production moves through fast-paced sequences punctuated by the tinny sound of a boxing ring bell.  These clangs coincided with the real bells of the Carmes cloister as the clock struck the hour at one point in proceedings, enacting the sonorous encounter between our world and that of the characters. Acoustic vertigo was also stirred toward the end when Ariane and Raymond explain simultaneously their perspective during a meeting with Raymond’s librarian colleague, whom he contacts to help Ariane find an internship that will be her ticket out of a life of petty theft and social exclusion. At another point before this, Clara Starkier, playing Ariane, breached the fourth wall to explain to Raymond (Timsit) her pickpocketing techniques. Donning a face mask to follow COVID-19-related protocol, she interacted with several audience members, pointing at the tote bag by my feet and warning me to take care of my belongings. Never actually touching us (again following protocol) her proximity created frissons and imbued the scene with a sense of the quasi-tactile. I felt fear when she picked on me, prompting me to the immediate reflection that I had forgotten that this was an actor playing a role.

As part of its aim to create a form of art that serves the citizenry (art citoyen),[ix] this moment in Boxing Shadows had the effect of confronting spectators with a hard truth: that we—in our feelings of fear, apprehension, discomfort—are complicit in the suspicious glances and prejudice that Ariane faces as an illegal immigrant. The BFMTV news channel on loop on Raymond’s television set remind us that Islamophobia has been rife in France since the 2015 terrorist attacks. So ingrained is it in French society that it is small wonder that Ariane vehemently denies both her illegality and her foreignness, even hyperbolically performing the racism spun by the sensationalist media on display on Raymond’s TV. We never actually find out where Ariane and her mentor Raymond come from, though we are led at several points to think of their cultural and racial alterity and, in the case of Raymond, of his non-heteronormative lifestyle. But I believe that the early moment in which Ariane’s faces off with the audience was designed to turn the lens back on us, to lead us to question our need to know the characters’ origins, and to interrogate our own privileges. Jackie Sibblies Drury’s Fairview, a play about an African American family filtered through racist stereotypes, has used a similar breach of the fourth wall to confront spectators with the prejudices of their own white gaze. To quote Sara Holdren, “Fairview […] begins by giving us something we think we’ve seen before, then estranges us from it and from ourselves as viewers of it, then cracks the whole thing open entirely and forces everyone in the room, actors and audience, to reckon with the broken pieces”.[x] I would suggest that Boxing Shadows aims for a similar sense of estrangement and reckoning in spectators. 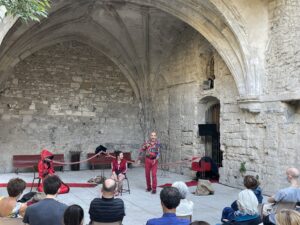 There is a dynamism to Boxing Shadows conveyed through scenography and character development that means that the production does not simply leave us with the broken pieces but attempts reparation. When Raymond sets about teaching Ariane how to box, a thick red rope that lay by the central corrugated iron post is hooked onto the posts to the right and left, transforming the stage into a boxing ring. Ariane not only gains in proficiency at the sport in the makeshift ring (despite Raymond’s discovery that she might have Parkinson’s disease); in facing off a young male boxer of Arab descent whom Raymond strategically pays to put up a fight while ultimately losing, Ariane takes back the racist rhetoric she espoused previously declaring herself to be no different from her sparring partner. Crucially, we are positioned in this symbolic sphere of change and evolution too: remaining unclosed, the three-post boxing ring invites us in. As the press pack explains, the unfinished ring enables us to ask the question, “[W]ho is at the centre of the combat, the actors or spectators?” [qui est au centre du combat, les acteurs ou les spectateurs ?].[xi]  We, like Ariane, are positioned as subjects fighting against the theme of social exclusion defining Boxing Shadows.

For me, Boxing Shadows stirred fury and sorrow for Ariane’s plight. The production breaks down our suspicions of the character that we are made to reckon with at the beginning. There is a tender comedy in Ariane’s and Raymond’s repartee, their gestures, and the fluid acting and interactions of Clara Starkier and Roland Timsit who play the characters. The struggles of Ariane are leant solemnity through the operatic tones of the singer (Lila Maski). When Ariane collapses after saving Raymond from near death in a terrorist attack against the employees of the library where he works at the end of the production, I was deeply moved. The moment gains a timelessness as it is compared to the Ancient Greek myth of Ariadne, the protagonist’s namesake, who had helped Theseus (aka Raymond) to escape the monstrous Minotaur by guiding him out of the maze. The allusion to the Cretan Princess of Classical Antiquity reverses the idea that Ariane is simply Raymond’s muse and pupil; this is a tale of mutual learning.

And it is learning that Boxing Shadows ultimately seeks from its audience members. This comes in the immersive moments that enable us to be swept up in Ariane’s tale. Remaining untranslated, the title evokes Ariane’s personal combat, the nebulous but very real forces she fights against as an illegal immigrant and as a young woman. The eponymous “shadows”, I would suggest, are ultimately us spectators, as we watch from the sidelines and are led to question our own position regarding the forces of social exclusion that we see on the stage.

[ii] A number of commentators have problematized the hierarchies of economic status, race and Western-non-Western status implied in the lexicon of migration, with the terms “immigrants” and “migrants” separated from the status of “expat”, reserved for wealthy white westerners. See: Mawuna Remarque Koutonin, “Why are white people expats when the rest of us are immigrants?”, Guardian, March 13 2015. https://www.theguardian.com/global-development-professionals-network/2015/mar/13/white-people-expats-immigrants-migration Yasmeen Serhan, “‘Expat’ and the fraught language of migration”, The Atlantic. October 9. 2018. https://www.theatlantic.com/international/archive/2018/10/expat-immigrant/570967/ [both accessed July 30, 2021].