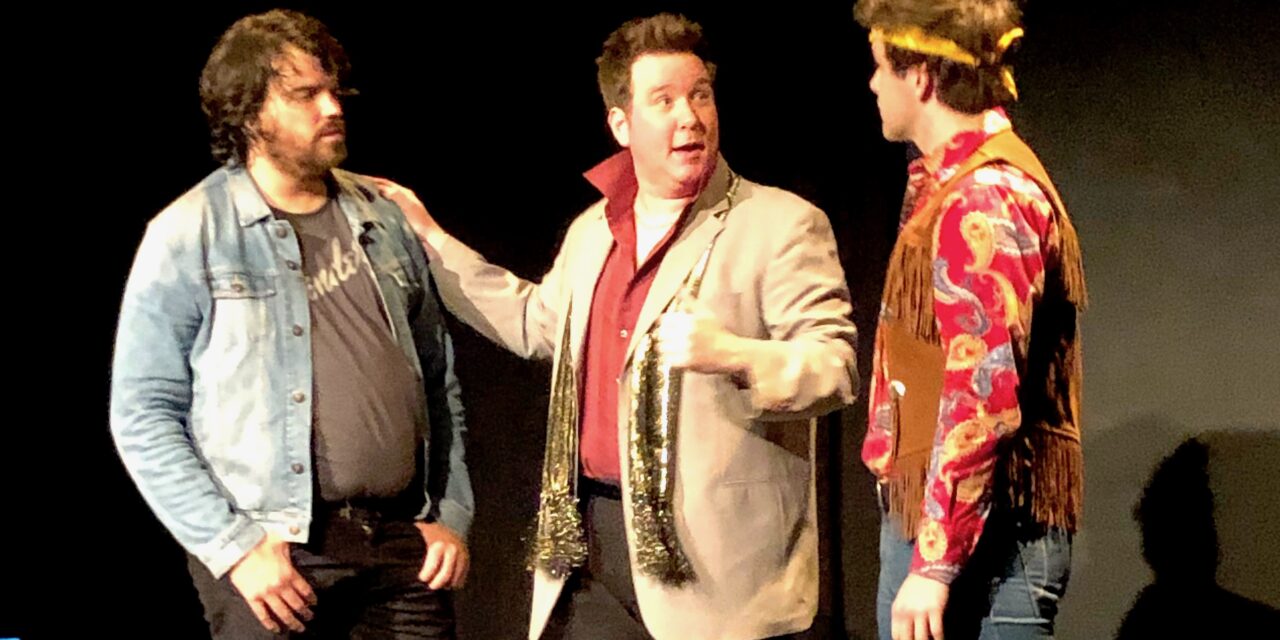 A successful record producer dies and finds himself in Purgatory where a disembodied voice gives him a choice – he can go back to a pivotal moment in his life when he essentially crushed the hopes and dreams of a promising singer and right the wrong, or he can stay in Purgatory and take his chances with eons-long redemption.  He chooses the former and is launched back in time to the 1980s.  This is Rewind – A New 80’s Musical, written by twin brothers Geoffrey and Sam Rose, choreographed and directed by Nancy Dobbs Owen.  Nigel (Nelson Hayne) is the producer who is given a pocket watch with months on the face instead of numbers.  He has one year to convince Gina (Suzanne Slade) to record a hit that will re-align her trajectory back on the track to stardom instead of a lifetime of waiting tables in a coffee shop, slipping food out for her ex-boyfriend, Tommy (Chris Kerrigan) who has lost everything and now lives on the streets.

It’s the stuff that hit 80s movies are made of in many ways and the cast is costumed perfectly for the journey.  Once we go back in time, however, the story gets a bit scattered and that original urgent need to put Nigel back in Gina’s life is expressed via a scene between the two where she lets us know that they had a relationship back in England (she has intentionally dropped the accent that he sustains) that led to an unwanted pregnancy and ever since she’s been crushed and haunted by the whole thing.  This is a bit of shocking news that doesn’t really hit Nigel all that hard.  Even though the clock is ticking and his afterlife is on the line, he never approaches Gina again – until others bring her to him later.

Instead, he uses Cookie (Megan Beard) as a conduit to lure Gina back into the studio.  Cookie wears purple sparkling tights with a black bra showing through a bright pink mesh top and works in what appears to be a studio or for a record company promoting a star in need of a new hit song.  With Nigel as a mentor, Cookie asks for Gina’s help in getting Tommy to write one (the two are friends).  Tommy’s friend Mark (David Šášik) is incongruously stuck in the 70s, bell bottoms and all.  He maintains a positive outlook in spite of being a folk singer who missed his window of opportunity in New York by about twenty years.  Cookie struggles to get Mark and Tommy to write that hit song that will pave her way to music producing glory. 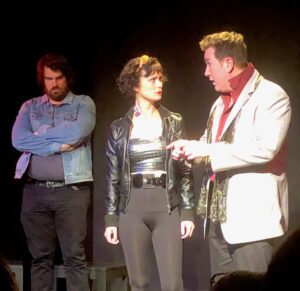 Meanwhile, Darcy (Natalie Miller) shows up at the diner to ask Gina for a job.  Her Southern accent and relentless positive outlook win Gina over then all but sweeps Mark off of his feet.  A lot of time goes by without a single effort on Nigel’s part to get Gina on her way to a record deal – at least not one that doesn’t feel lighthearted in the execution of it.  The advice he gives, the song he sings with Mark and Tommy to inspire them to complete a song together – all of it feels rather less than urgent on his part.  Darcy gathers the courage to tell Gina that she is actually the child that Gina gave up all those years ago.  At first, Gina balks but then quicker than we can even process, she embraces the girl and the two sing a duet that might have been more successful if more time had transpired between Gina getting the news and her kissing and hugging her daughter as if the two never parted.

By this point, the thread has all but unraveled.  Darcy seems to be writing a song with Mark that is separate from the song Mark is supposed to be writing with Tommy.  Gina likens Tommy’s touch in their early days to velvet and somehow that becomes the title of the song that she is asked to come into the studio and sing for the star as a demo.  She knocks the song out of the park complete with all the rock star sexy dance moves and gestures required – then runs out of the studio in a kind of horror.  Nigel almost takes it in stride.  The storyline is fuzzy and we are all but forced to let it go.  What we can say for sure is that every person in the cast has a hell of a singing voice (though their styles don’t always match) and that the choreography is spot-on for the time period.  Gina overcomes her fears and becomes a star in her own right, which seems to save Tommy from the dark fate we witnessed at the start.  Nigel doesn’t get the girl, but he does get to know his daughter and chooses to stay in the 80s to relive his time out on the planet in order to get to know her better.   Darcy and Mark fall head over heels for each other and Cookie is able to take the credit for Gina’s success.  It’s a happy ending straight out of a movie – we only end up wishing it all felt a bit more clear and earned.

More information is available on the Hollywood Fringe website: