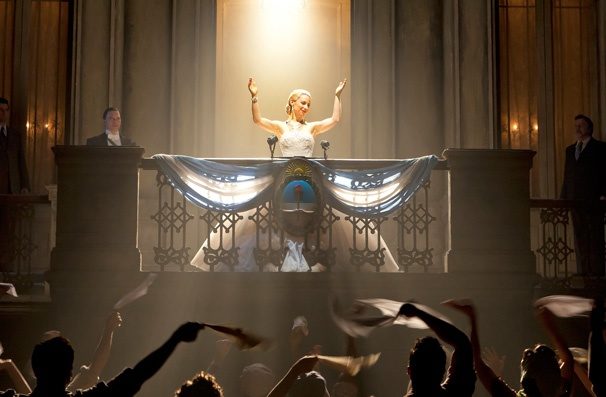 How many major Latinx or Latin American characters can you name from mainstream musical theatre history?

West Side Story’s Sharks, A Chorus Line’s Diana Morales, Rent’s Mimi Marquez and Angel Dumott Schunard, and the casts of Kiss of the Spider Woman and In the Heights might come to mind, but beyond that it gets tricky. See, the hard truth is that Latinx and Latin American representation on the Broadway musical stage is few and far between. This despite the fact that Latinx composers and playwrights do in fact write musicals! (Robert Lopez of Avenue Q, The Book of Mormon, and Frozen fame, for instance)

With this in mind, I question what happens when perhaps the most iconic Latin American character in musical theatre history is continually cast with an Anglo actor? I’m talking about you, Eva Perón!

Admittedly, the sociopolitical climate when Elaine Paige originated the title role in Evita in 1978 was far different than today, or even in 1996 when Madonna played the role on the big screen. But in 2017, casting an Anglo actor as Eva Perón in professional theatre is, simply put, unacceptable. And that has exactly what has happened recently with Marriott Theatre, ZACH Theatre, Pennsylvania Shakespeare Festival, and now North Shore Music Theatre all casting Anglo leads in the show. Notably, each of these companies is a reputable professional theatre company with a corresponding budget. In other words, they have the resources to cast Evita appropriately.

These productions have not flown under the radar. Each production has been met with criticism from local, and sometimes national communities, over casting and whitewashing. Not to mention that while Evita has become hotly contested, productions of The Mountaintop, Jesus in India, In the Heights, and even Hamilton have been embroiled in controversy in recent years over the question of who gets to tell what story. 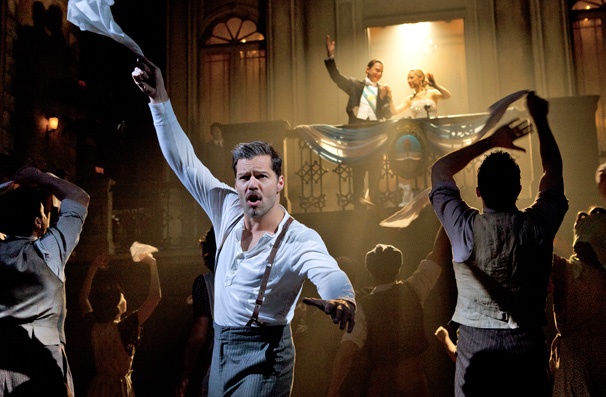 Ricky Martin as Che, Michael Cerveris as Juan Perón, Elena Roger as Eva Perón and the cast of Evita.

When the 2012 Broadway revival of Evita arrived in New York it seemed to make a turning point of sorts for how the musical would be cast. Latinx/Latin American actors Elena Roger and Ricky Martin headlined the production to much fanfare. Finally, there was a brown Eva Perón on the Great White Way (Evita’s national tour employed Anglo actor Caroline Bowman in the title role). Surely regional theatres would take notice. And they didn’t, which brings us to North Shore’s casting announcement of their fall production of the musical, which is headlined by Constantine Maroulis as Che.

It is worth noting that North Shore’s casting call said “submit all ethnicities,” not specifying that any of the characters are Latinx or Latin American. On the contrary, Asolo Rep Theatre’s Evita casting notice specified that all characters were Latinx and, subsequently, their production will feature Latinx talent in all leading roles.

Lauren Villegas, who founded Project Am I Right? in response to the Marriot Evita casting controversy, writes in “Casting Evita in 2017 and Beyond” (see Musical Theater Today):

In a time when people of color—and in particular people of Latin heritage—have been dismissed and insulted by the new presidential administration, slating any non-Latinx actor in such a powerful and political role is a missed opportunity to counter pervasive narratives of exclusion. Furthermore, it is a missed opportunity to minister positive Latinx representation, and provide needed jobs to dedicated and accomplished Latinx artists.

Given Villegas’ relationship with Evita, the musical has become a consistent focus of the project.

Project Am I Right? focuses on raising awareness within the acting community. The premise is simple: actors should ask themselves whether they are truly right for the role (For more, visit the project’s website). In this way, by educating actors (and casting directors, productions, directors, etc.), the power dynamics of whitewashing can shift to create an inclusive space where roles specifically written for people of color are cast with actors of color. In this case, Andrew Lloyd Webber and Tim Rice may not have written Evita with a Latina leading lady in mind, but we are no longer living in 19878. The politics of representation have shifted and the Latinx theatre community wants access to roles such as Eva Perón and Che. Far and wide, the Latinx community rightfully believes that the story of Eva Perón should be told by Latinx actors.

Sure, some may say that most Argentines are “white” and have European origins, but as actor Bear Bellinger writes in an open letter to Marriott Theatre: “you can not escape the fact that their culture is Latin.” Yes, many Argentines are white. In the same way, there are many white Latinx people in the United States, from all cultures and national backgrounds. What Eva Perón was not was Anglo. Therein lays the problem at hand. This isn’t an issue of skin tone. Speaking of Marriott Theatre’s casting controversy, actor Diego Colón notes, “My grandmother was 100% Puerto Rican and white AF. Latinos come in all color. They claim a white person in these roles looks more ‘accurate.’ To my eyes, I can’t understand how a white woman named Hannah is more accurate than an ACTUAL Latina.” Not to mention that saying Argentines are “white” also erases Argentina’s indigenous cultures and the peoples who inhabited the are pre-conquest. 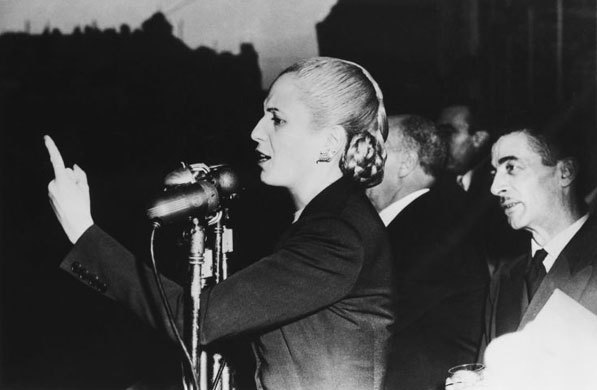 Director and playwright Tlaloc Rivas notes how the Americas are “not the same one that allowed Evita to emerge in the 80’s. The world is much more fluid, dynamic, multiethnic—and to ignore that in the 21st century is akin to claiming men should only perform the works of Shakespeare.” As Rivas notes, today there are no excuses to not cast Latinx actors in shows such as Evita.

North Shore produces theatre for approximately 250,000 spectators a year and is one of the most well-known and respected theatres in the country. All of this is to say that they have the resources to effectively seek out appropriate actors for shows such as Evita. Instead, audiences will see Briana Carlson-Goodman, Constantine Maroulis, John Cudia, and Nick Adams as Eva, Che, Perón, and Magaldi. What is more, in a particularly troubling turn of events, the North Shore social media team actively deleted any comments on their Facebook page that were critical of their white non-Latinx cast (See: Luis Eduardo Mora).

So what now? North Shore isn’t going to cancel or re-cast their production of Evita, which opens on September 26 and runs through October 8. According to Lauren Villegas, it is up to actors to do the right thing since theatres can’t legally ask actors about their backgrounds:

No one can police another person’s identity. It is up to each and every actor to act in good faith, to be honest with themselves and with those responsible for casting decisions. Most creatives are not intentionally trying to erase anyone. Most creatives have good intentions about casting inclusively. But their hands are legally tied and they must be able to trust actors to be forthcoming with them.

Villegas added that theatre companies that decide to produce Evita should first focus on hiring Latinx creatives before questions of casting even begin. If a company truly wants to be inclusive and tell this story in conversation with the Latinx community then Latinx creatives must have a seat at the table.

If theatre companies begin to build inclusive creative teams and actors only audition for roles that are written for them then perhaps Evita can once again be high flying, adored.