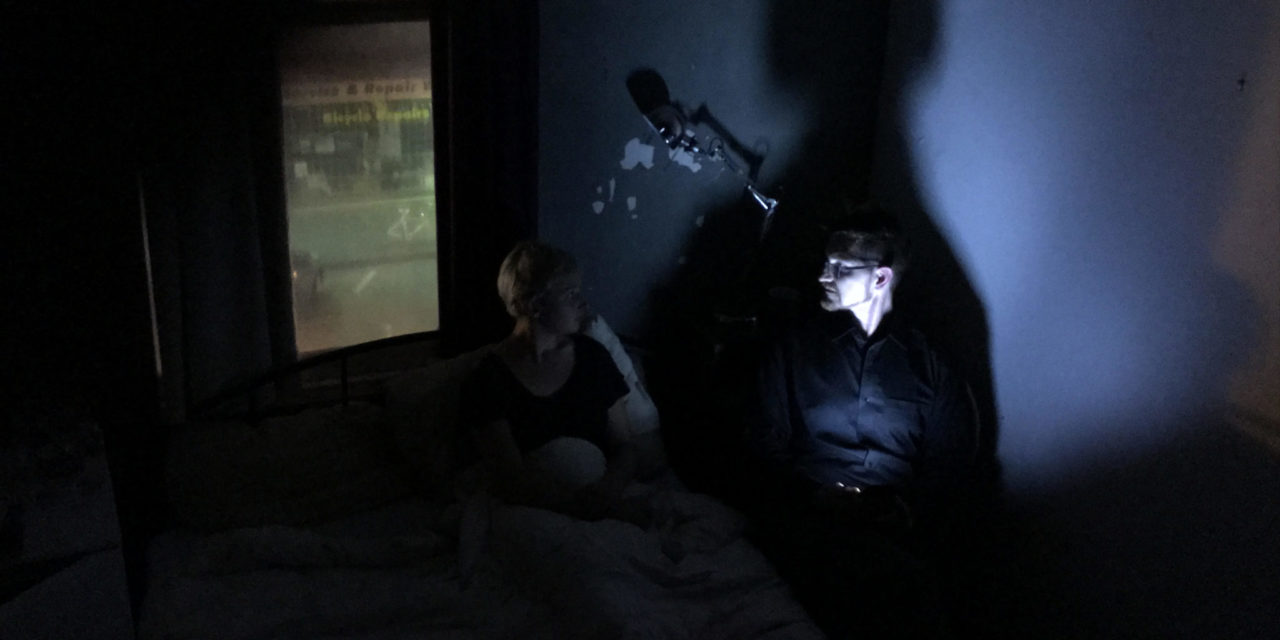 homas Ian Doyle’s "The Upstairs Trilogy Part 1: The Love That D.are Not Speak Its Name" at The Owl and Cat Theatre. Press photo

Bold and provocative, directed by Sarah Vickery.Thomas Ian Doyle’s latest work – The Upstairs Trilogy Part 1: The Love That Dare Not Speak Its Name – tackles a futuristic Australian government that has found a way to “correct” same-sex relationships.

Homosexuality is outlawed and a simple, painless two-dose injection – with minimal side effects, if any – subjugates the female-to-female or male-to-male sex drive. The State is forever keen to track down anyone who declares such an inclination on the Census, as these non-conformists are then obliged to undergo “the treatment”. A lesbian couple – one of whom (Zaffie) acknowledged that she was gay on the form and the other (Belle) who did not – are having a hard time of it. Zaffie cannot be seen in public for fear of being captured on video surveillance and forced into sexual realignment. For the past six months, she has been holed up in a seedy hotel, often with a plant as her only living company and, not surprisingly, she has “cabin fever.” Frequent “episodes” suggest she is starting to lose her mind. The mental torment involved in her isolation is consuming her.

Set on the uppermost floor of The Owl and Cat Theatre, the three-hander focuses upon Zaffie and Belle and Belle’s brother Terrence, a nurse. A six-minute prologue soundscape (I am not convinced it needed to be that long) by Melbourne-based composer mbryo sets the scene with what appears to be the sounds of passion gradually overtaking classical music. But what is really going on is only revealed when the curtain is pulled back. Then the real scene setter, the first act, is not as clear as it could be. There are cues and clues, but I found them difficult to decipher as I had entered the theatre without having read the blurb on The Owl and Cat’s website. Whenever possible, I attend a play, musical or film without knowing anything about it, reasoning that it is the writer’s job to create a self-contained piece that is informative, engaging, intellectually challenging and/or entertaining.

You understand a relationship is happening between Zaffie and Belle – lovers – and that Zaffie appears to be on the verge of a nervous breakdown, for she is like a cat on a hot tin roof. She receives constant reassurance from her working partner, Belle. But, clearly Zaffie is deeply frustrated by her predicament, although the whys and wherefores of that are only outlined as the play unfolds. Everything steps up a notch when Belle’s sibling enters the fray. While Terrence appears to “accept” that his sister is a lesbian, he doesn’t welcome being prevailed upon to sneak around to find medication when Zaffie is ill.

Doyle doesn’t mind entering a contentious territory. In fact, he revels in it. Here his 1984 is a dystopian society of only the heterosexual kind.

Fiona Scarlett and Gabrielle Savrone get down to it as Zaffie and Belle in quick time, disrobing and then probing the complexities of their characters’ relationship. While nudity is integral to the storyline, it is dealing with the government edict that outlaws same-sex relationships that drives the narrative. As seen through these womens’ eyes, it becomes a question of how to cope, what to do and whether one can, indeed, live any meaningful life when one is effectively cut off from the world.

If Doyle was looking to provoke, ponder and reflect, he has done so successfully. Scarlett and Savrone’s performances won’t easily be forgotten, although more passion in their one-on-one contact would have made that appear more “real,” while Toby Rice adds the curve ball as Terrence.

The Upstairs Trilogy Part 1: The Love That Dare Not Speak Its Name is playing at The Owl and Cat Theatre at 34 Swan Street, Richmond until 16th December.