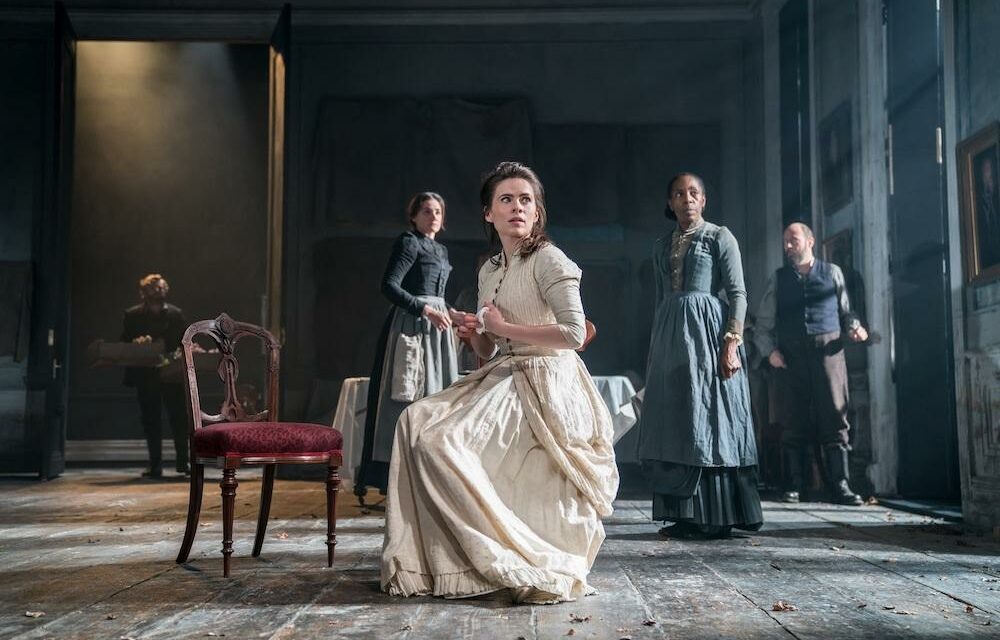 Rosmersholm is considered a difficult and rarely performed play. But, judging from this exceptionally exciting revival by Ian Rickson, it is a relevant and highly topical political classic. Much of this derives from Duncan Macmillan’s new translation, which has a plain, almost flatly understated, directness and clarity which underplays poetic imagery in favor of emotional and psychological truth. This is apt and timely. As Sigmund Freud argues in his 1916 essay Some Character Types Met Within Psycho-Analytic Work, the play is richly allusive in its representation of a household’s mind games, especially the unconscious drives that power relationships.

Originally staged in 1887, the play is set inside Rosmersholm, the country seat of an ancient and essentially conservative family. John Rosmer, the last in this noble line, is a minister who has suffered both the loss of his religious faith, and of his wife Beth by suicide. A year after this event, he returns to the family home and, influenced by Rebecca West, a platonic friend of himself and his wife, attempts to make an intervention in the imminent election, on the side of the progressives. Rebecca, a feminist and a radical thinker, inspires him to go beyond his normal cautious self.

While this might puzzle Mrs. Helseth, the Rosmer family’s housekeeper, it antagonizes Andreas Kroll, Beth’s brother and Rosmer’s old friend. Being a local big-wig, he is a thoroughly conservative politician who is appalled by the leftward moves of the intellectuals and the people. His prejudices come across loud and clear. The picture is complicated by Ibsen’s introduction of two other characters: one is Peter Mortensgaard, a radical newspaper editor, who has a scandalous past and who first asks for Rosmer’s support, and then cynically betrays him. The other is Ulrik Brendel, once an inspirational university teacher and now a penniless alcoholic unable to string together a political argument.

If neither right nor left can solve society’s problems, what about the couple at the center of the drama? Clearly, the figure of Rebecca West, an ardent feminist who wants to use her influence to convince Rosmer to become active politically, is the progressive force that fuels the action. Her power over Rosmer, an indecisive man who is better at losing his ideals than at strenuously nurturing new ones, is complicated by their sexual attraction, which was repressed while Beth was alive, and is now colored by his guilt over her death. Unable, despite their belief in free love, to consummate their relationship, the couple cannot move on.

As the drama develops, it seems as if Rosmer and Rebecca will finally marry, then, as their unconscious drives become shockingly clearer, this suddenly looks impossible. The psyche of the play is powerfully affected by Ibsen’s interest in the death wish, and suicide is a central theme. Has Beth killed herself because she was unable to have children, or as an act of self-sacrifice to make way for Rebecca, whose personality has entered her husband’s heart? Like Tristan and Isolde’s liebestod, there is something that is both hugely distressing and magnificently symbolic about this metaphoric situation. If both Rosmer and Rebecca cannot live freely in a bourgeois society, then they must work to change it. But if they fail, then suicide offers a way out.

Rickson’s production fills the set, beautifully designed by Rae Smith as a dilapidated ancestral home, with added servants to give some sense of the working population, whose emancipation is so earnest discussed by the privileged elite, and a gloomy Scandinavia mood is aided by Neil Austin’s austere lighting and Stephen Warbeck’s gothic music. Hayley Atwell strongly conveys Rebecca’s frustration as an intelligent woman in a man’s world, having limited opportunities, but passionately desirous of change. At one point, she beats Rosmer’s chest in despair. She also indicates her character’s guilt about Beth’s death and an awareness of the crippling pain of her own scandalous past.

Equally impressive are Tom Burke’s Rosmer and Giles Terera’s Kroll. Burke embodies the feeling of Rosmer’s losses by his modesty of demeanor and eager openness, while Hamilton star Terera radiates his character’s strength of conservative convictions, as well as his manipulative cynicism. The main actors are ably supported by Peter Wight as the ragged professor, Jake Fairbrother as the sly editor, and Lucy Briers as the moral housekeeper. Together they create a brilliantly coherent and cogent staging, which expresses a very contemporary desire for political and feminist change, while also acknowledging the drawbacks of the progressives and the psychology of suicidal despair. A masterly reading of a European theatre masterpiece.

Rosmersholm is at the Duke of York’s Theatre until July 20.