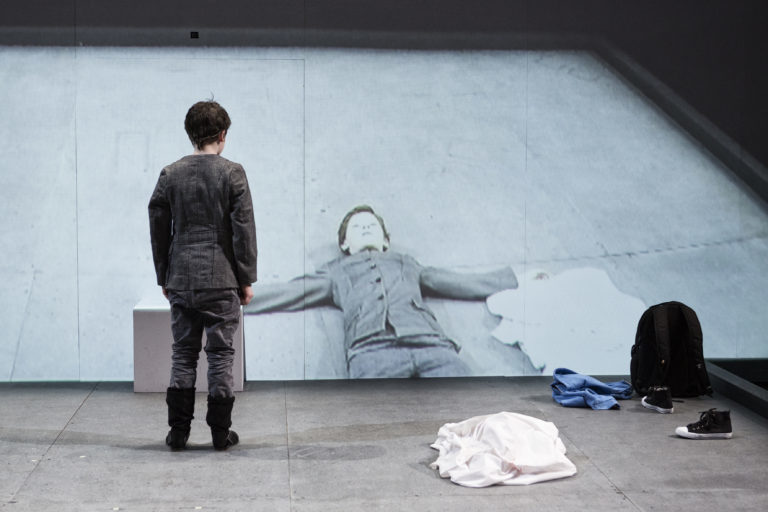 Hamnet, the fascinating play, created by Ireland’s Dead Centre, now at ArtsEmerson’s Paramount Theatre in Boston revolves around Shakespeare’s only son. Over the years, scholars have speculated that Hamnet who died at age eleven in 1596 was the inspiration for Hamlet given the similarity of the two names. Many believe, as do playwrights Bush Moukarzel and Ben Kidd, that Shakespeare had no contact with Hamnet.

Hamnet, played by Ollie West, is a sad and lonely eleven-year-old boy who yearns to meet his father. At the same time, he is playful. He wants to perform Hamlet and in preparation has been practicing “to be or not to be,” which he believes is “the most famous speech in the world.” He aspires to greatness like Shakespeare.

There are two acting areas, one onscreen upstage, the other downstage. When downstage, Hamnet talks directly to the audience, somewhat like Shakespeare’s characters in their soliloquies, but more conversationally. At times, there are two Hamnets present, one on screen, the other on the stage. The downstage Hamnet often studies the onscreen version, seeking meaning.

He enters carrying a black satchel that contains all the props he will need. Dressed in a blue hoody, which partially covers the red t-shirt he wears underneath, gray pants, and sneakers Hamnet seems like a boy of today. When he does not know something, he pulls out his cellphone and calls google. Later in the show, he sings Johnny Cash’s A Boy Named Sue. In addition to borrowing from the present culture, the writers have used other Shakespearean sources, most notably Constance’s grieving speech in King John.

Shakespeare appears on the screen wearing a somewhat Elizabethan shirt, a pair of sixteenth century knickers, high white socks and black shoes. He tells his son he wants to hug him; Hamnet puts out his hand instead and throws up.

Hamnet fearfully keeps asking him what it is like not to be, the central question of the play. Shakespeare feels guilty for not being there for Hamnet, not even when he was on his deathbed. The two perform a dance. At several moments Hamnet puts on makeup and a sixteenth-century costume and gives a speech from Hamlet. Shakespeare’s guilt drives him away. As is often the case in a parent-child relationship, neither meets the needs of the other. Shakespeare feels “haunted” by Hamnet while Hamnet accuses Shakespeare of being the ghost since he is the one who is not there.

Ollie West for whom the role of Hamnet was written is an extraordinary young actor, both funny and moving. Shakespeare is played largely on screen by Bush Mourkarzel, who in addition to being one of the playwrights also directed the play with his confrère Ben Kidd.

The sixty minute Hamnet, a must-see, will be at Boston’s Paramount Theatre until October 7.

This article originally appeared in Capital Critics’ Circle on September 28, 2018, and has been reposted with permission.